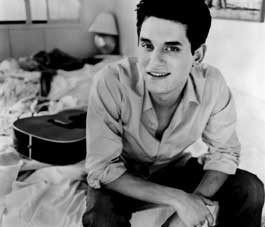 John Mayer just might be the best young songwriter in America. Never mind all the “folk rock” comparisons to Dave Matthews, David Gray, Jeff Buckley, Pete Yorn and others. Disregard the Connecticut native’s brief stint at Berklee School of Music in 1997 and his dues-paying stint at blues clubs in Atlanta. Instead, just listen to Mayer’s energetic, mindful lyrics, his undeniably catchy melodies and his brilliant guitar playing. Drawing on his roots, Mayer creates a sound that he calls “crystallizing blues music and pop music.”

The 24-year-old has already spent a decade playing guitar informed by the “colorful lushness” of bluesmen like Stevie Ray Vaughan. But Mayer’s own sound developed from hearing “bits of tones” from other musicians, he explained in a recent phone interview after a string of shows in Florida.

“I started liking sounds on people’s records that only occurred once or twice,” Mayer said.

His ear for singular good notes is evident in his playing. Unlike some of his role models, Mayer shuns blues “virtuosity” and extensive jam sessions; both live and in the studio, his solos are confident but economical. In fact, he says, on stage he consciously limits the solos — an exercise in discipline for someone so gifted.

What Mayer focuses on instead is the craft of songwriting. His lyrical candor comes packaged in unique metaphors and imagery. A café’s salt and pepper shakers, the city’s lights and sirens, his lover’s toothbrush, a childhood lunchbox and a “quarter-life crisis” in his “still verdictless” existence are all subjects for Mayer’s pop musings. He writes and sings about universal themes — love, travel, coming of age — but without the usual clichés. Even traditional blues themes are addressed with an enduring optimism. His natural poetic observations of life suit Mayer’s eloquently sparse instrumentation.

These gifts have not gone unnoticed. A recent four-star review in Rolling Stone of Mayer’s Room for Squares (Aware/Columbia Records) calls the release “a travelogue of discovery,” with songs that “trade on energy instead of angst, wonder instead of pain.”

As another review coined it, Mayer’s “childlike lucidity” makes the everyday item noticeable, even worthy of marvel. Titles like “My Stupid Mouth,” “The Great Indoors” and “Love Song for No One” further hint at his inspired creative view.

Mayer’s undaunted spirit comes from a deep reverence for music. “I will forever be in love, in absolute love, with the experience of just plugging in the headphones and a microphone, putting a little bit of echo on it, and just singing and playing for hours,” he enthused. “The best feeling that I will ever have in my life is just walking, just being, the night that I finish a song.”

Room for Squares is an expansion upon Mayer’s deft performance on 1999’s self-released Inside Wants Out. The new release represents a transition from acoustic to electric, and to a major label. “It intoxicates you… you absolutely go bonkers!” he exclaimed about his reaction to being approached by industry heavies. But a November appearance on Conan O’Brien and inclusion on Rolling Stone’s latest “Next Wave: 10 Artists to Watch” list have not distracted Mayer from his focus. All signs suggest this young stargazer has his feet on the ground, despite so much national attention.

“One thing I do know is that I was born to play music every day,” Mayer asserted. “I didn’t even have a conversation with myself… it’s an instinct.”

That instinct finds a balance between the rootsy and the cosmopolitan — a mixture that has broad appeal outside the margins of blues, and across the usual divide of college and adult-oriented radio. Sounds like a good match for Burlington.