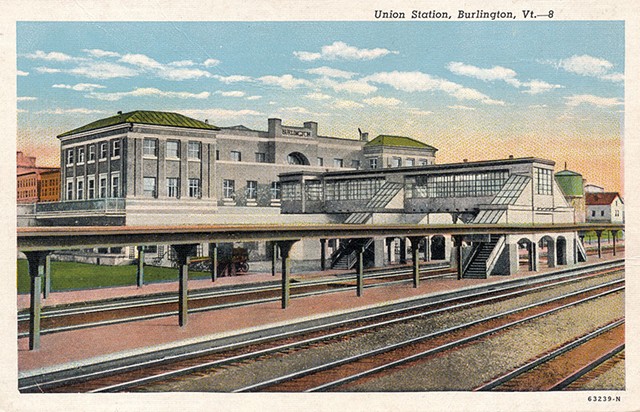 Half a dozen people took turns on November 4 telling the Burlington City Council that the city is being railroaded — literally.

A proposal to service Amtrak trains overnight at the old Union Station would create more noise and exhaust on the downtown waterfront, one of the city's most popular destinations and a residential area to boot. Adding insult to injury, locals told councilors, Vermont Railway plans to install a second track, displacing a section of the popular bike path while increasing train traffic and raising safety concerns.

"The waterfront will be forever changed," Carl Fowler, a Williston resident who serves on Gov. Phil Scott's Rail Advisory Council, warned the councilors.

"A lot of people, when they think of Burlington, they think of that area. It's a delicate issue," said Paulino, a supporter of passenger rail. He added: "I don't know what the city's options are. That's my main question."

The answer, it seems, is that the city has very few options. Authority to decide where to park the passenger trains lies with the Vermont Agency of Transportation, and a recent study performed at the city's behest scored Union Station as the best option of five possible depots.

Regardless of where the Amtrak train is stored, Vermont Rail System — the parent company of Vermont Railway — has said that it will add a second railroad track between King and College streets, a plan that, under federal law, is exempt from state or local regulation. The rail operator plans to use the new track to connect its freight cars while the Amtrak train is parked, as well as for its own excursion trains, such as the Polar Express ride during the Christmas season.

VTrans officials insist they're open to hearing from residents and will gather feedback at the city council's transportation committee meeting on November 19. They also point to the study conducted by the Chittenden County Regional Planning Commission as proof that they're dedicated to finding the right storage location. And the 11-member rail advisory council will recommend an option to VTrans Secretary Joe Flynn before the end of the year. Passenger trains are expected in Burlington by 2021.

Leading the opposition to the Union Station plan is Melinda Moulton. She's the CEO of Main Street Landing, the redevelopment company that refurbished and now operates several buildings, including the old train depot, near the waterfront rail line. While Moulton has worked for three decades to bring an Amtrak stop back to Union Station, she was aghast to learn that the trains could be stored there overnight.

As part of her research into the planning commission study, Moulton reviewed several years of VTrans emails. She provided Seven Days with about 150 pages of documents that she says prove the whole report was rigged.

In one message from December 2016, Michele Boomhower, VTrans' director of policy, planning and intermodal development, told Burlington Public Works director Chapin Spencer that while VTrans would support an analysis of alternatives, "we really don't have any options to move forward with other than storage at the station."

In February 2017, Boomhower directed the planning commission to do "a very small analysis" of the train storage issue. Later that year, a study consultant wrote that he "went with the 'less is more' approach with this report, thinking that it was destined for a shelf at VTrans."

Instead, a draft was publicly released in June 2018 and the final report in July. Both studies scored Union Station higher than parkland north of downtown, the Vermont Railway railyard near Perkins Pier and another site in the South End.

"This has been a sham," said Larry Sudbay, who owns one of four condos that sit feet from the station in Main Street Landing's Wing Building. "Taxpayers, everybody has just been lied to with this report," he continued. "It's unbelievable."

Charlie Baker, the planning commission's executive director, defended the report. He said the analysis is sound and wasn't influenced by VTrans or Boomhower, who previously worked as Baker's No. 2 before taking a job at VTrans in 2015.

"There was nothing precooked about this study, period," he said.

Boomhower, too, called the process sound.

"While we had an idea of where we thought the train would be best stored ... before the report was undertaken, we [now] have a whole lot more information regardless of the scores," she said. "I think we're sort of analyzing all of the information that came back from the report."

It's been a long-standing goal to return passenger rail service to Burlington, connecting it with New York City and points south. Planning began in earnest in 2015, when the state was awarded a $10 million grant to upgrade rail lines between Rutland and Burlington. Rutland brought Amtrak service back in 1996 to great fanfare. Vermont Railway built a second track at that city's train station so its freight trains could maneuver around the overnighting Amtrak cars.

The same could happen when the Ethan Allen Express returns to Burlington, where a crew would clean the cars, empty the onboard septic tanks and refuel before the next morning's run. Neighbors say that will be noisy, and they worry that idling trains will pollute the waterfront that Burlington has worked so hard to clean up.

Under a federal law known as preemption, railroads can bypass local construction and zoning permits and environmental review. If a train blocks your business' entrance? That's just too bad.

Vermont Rail System leases the Burlington track from the State of Vermont. The terms say that, so long as the railroad is conducting railroad operations, the trains can keep on rolling.

"We have full use of the railroad, absolutely," Vermont Rail System vice president Selden Houghton said. "VTrans doesn't get involved in the operations at all. They're merely the landlord; we operate it."

Other towns have tried and failed to fight the railroad. In 2016, Shelburne got mired in a lengthy legal battle over Vermont Railway's plans to build a large salt shed not far from the LaPlatte River. The town surrendered earlier this year after spending more than $500,000 in legal fees and losing two court appeals, the Shelburne News reported. The railway argued successfully that federal law exempted it from town oversight.

Boomhower said Burlington's second track would likely be protected by the same law.

"The second track is not something that is able to be modified [or] put in another location," she said. "That's just part of the project."

Noise and emissions should be minimal, Houghton said, noting that the people concerned about these impacts did choose to live next to an active railroad. There's no room to store the Amtrak at the railyard near Perkins Pier, he said, though that would be the city's preference. The planning commission's study estimated it would cost $50 million to store the train there because Vermont Railway would need to move its operation to make room.

Longtime waterfront advocates aren't convinced, and they worry that all this train activity could tarnish the Queen City's crown jewel and return it to its industrial past. Passenger trains stopped at Union Station from 1916 to 1953, and the area once boasted 15 tracks. For years, freight trains made frequent runs to the coal-powered Moran electrical plant and oil tanks along the Lake Champlain shoreline.

But during the 1980s, then-mayor Bernie Sanders' administration fought to reclaim the waterfront for parks and other uses, an effort capped by a 1989 Vermont Supreme Court decision that helped the city acquire 60 acres of land from the railway.

Other waterfront champions include former governor Howard Dean and environmental activist Rick Sharp, who led a citizen group that successfully lobbied to convert a disused waterfront rail line into Burlington's bike path in the 1980s and '90s.

Dean said it's "crazy" and "bad public policy" to lay a second rail track on the waterfront. As governor in the early 2000s, he pushed for a short-lived commuter train between Burlington and Charlotte. Sharp, who recently wrote a book about his efforts to create the bike path, called the plan "ludicrous."

"The only one that seems to want that there is the railroad," Sharp said. "The track itself is actually owned by the State of Vermont. We the people of Vermont own the track."

Despite their opposition to the plan, both Dean and Sharp think that the bike path, if displaced by the rail track, should be moved off the railroad's right-of-way. In 2016, Sharp convinced voters to support a nonbinding ballot item that proposed moving the bike path between King and College streets onto land owned by the Lake Champlain Transportation ferry company. Since then, Mayor Miro Weinberger said he has had "productive conversations" with the ferry company's Trey Pecor and with the ECHO Leahy Center for Lake Champlain, which leases land from the city just south of College Street.

"I'm optimistic that we will find a way to get this done without the use of eminent domain," the mayor said.

While the city may not have a say on installation of a second track, Weinberger thinks VTrans' request for feedback on the train storage question is genuine. Neighbors' concerns over air quality and safety are valid, he said, but their worries that the waterfront will be reindustrialized are "dramatically overstated."

"Adding a passenger [rail] siding is not going to bring back oil tanks and a coal-burning plant," Weinberger said. "We're not going to make a decision based on that kind of sentiment."

Rather, the mayor said, the city will consider which location has the least impact on homes and businesses and will pressure VTrans to choose that option. Fighting the railroad would be messy, Weinberger said, but the city hasn't ruled it out.

Main Street Landing's Moulton hopes the city will step up and join the fight. After decades pushing for Amtrak's return, she is now viewed as the train's most vocal opponent, an irony that's not lost on her. Standing in the empty lobby this week, Moulton recalled how, with Dean's help, Main Street Landing refurbished the aging station in the late 1990s, readying it for the trains. Just a few years later, Jim Carrey and Renée Zellweger filmed a scene for the 2000 comedy Me, Myself & Irene in the brand-new station. Moulton watched the film with tears of joy: Amtrak had finally arrived, if only for four days on a movie set.

She wants the train back — but not parked overnight on the waterfront.

"We just feel really sad that after all the years we worked to bring passenger rail back, that this comes with it," Moulton said. "We fought for this train, and at the end of the day, it's a stick in the eye."

Correction, November 14, 2019: A previous version of this story mischaracterized Mayor Weinberger's position on challenging the railway over its decision.

The original print version of this article was headlined "Runaway Train? | Burlington officials, residents have little say in railroad plans that would alter downtown waterfront"