Rumblecat, 'Til the Neighbors Shout 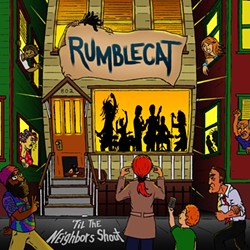 Rumblecat have been bouncing around the local scene for about three years now. They've maintained a fairly low profile in that time, existing primarily as a bar band plying their trade at various juke joints and watering holes around the state. Recently, however, the group has begun to gain some traction — and attention. In 2015, Rumblecat were named finalists in the Best in State: Vermont category at the New England Music Awards. They were nominated again this year, and, lo and behold, they won. Though not widely viewed as being among Burlington's upper echelon just yet, Rumblecat seem to be headed in that direction. The band makes its case on a soon-to-be-released debut album, 'Til the Neighbors Shout.

Rumblecat are primarily rooted in a blues-rock hybrid. That's not exactly virgin musical territory. And the band doesn't expend much effort trying to reinvent the wheel. You won't find much in the way of groundbreaking new ideas, either musical or thematic, on Neighbors. But there's something to be said for a band that knows which lane it's in and is content to stay there. Not everything in music has to be mind-altering art or some profound statement. Rumblecat appear to know exactly who they are and, as such, they're good at what they do. This is straightforward blues-rock, funk and pop fueled by high energy and heavy grooves. Also harmonica.

Front man Collin Cope is the engine that makes Rumblecat, well, rumble. His bombastic blues howl has just the right balance of grit and tone. He's also a gifted harmonica player whose searing lines add depth and character. Opener "I Started a Fire" explodes in a head-bobbing torrent of guitar fuzz and watery organ. Cope's delivery is strained in all the right ways, not unlike Rustic Overtones' front man Dave Gutter. It's hard not to be drawn in at the shout-along hook, which is followed by a short, tasty blues-harp run.

Rumblecat's genetic makeup includes a little jam-band DNA. It pops up like freckles in the album's sunnier moments. "Stop That Train" offers a laid-back, wiggly blues-groove set by drummer Trevor Michalak and bassist Luke Fox. "Fishin'" is a nine-minute slow burn that offers sinister harp licks and grimy guitars, the latter courtesy of Kyle Rosenblad. "Lonesome Soul" is a lighter-worthy sing-along with a gently bouncing feel, and it highlights backing vocalists Hannah Lebel and Samira Simmons.

Rumblecat's biggest weakness is a tendency toward limp lyrical clichés — trains, rivers, things Mama told you, etc. But those occasional stumbles are forgivable and more than offset by the band's impressive musical prowess and energy.

Rumblecat play a CD release show on Saturday, April 23, at Nectar's in Burlington. 'Til the Neighbors Shout will be available at that show, and at cdbaby.com starting April 30.

Speaking of Rumblecat, 'Til The Neighbors Shout