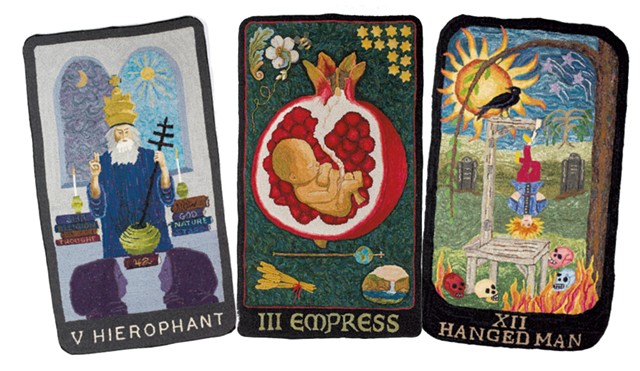 Tarot cards and their iconography have been enjoying renewed popularity lately. One incarnation is the release of artist Ariel Hart's free digital Lisa Frank Tarot Deck, which, as the Huffington Post puts it, turned "the Internet into one giant, amorphous, screaming tween girl."

The centuries-old images, though, don't appear to be in danger of being subsumed by digital media or by a stationery empire beloved of millennial women. "Exploring the Tarot" at the T.W. Wood Gallery in Montpelier presents the tarot's 22 major arcana, from the Fool to the World. In this case they are rendered in the loops-on-loops of hooked rugs, handmade by multiple generations of female artists — and one male.

Thanks to a series of overlapping networks in the niche world of rug hooking, Vermonters can now enjoy this ingenious merging of contemporary craft and cartomancy. Quick primer: Rug hooking is the process of using a hook to loop wool fabric through a base material, such as linen, to form a premeditated design. It is slow, methodical work.

Stephanie Allen-Krauss of Montpelier business Green Mountain Hooked Rugs first learned about the show more than a year ago from organizers Michele Micarelli of New Haven, Conn., and Loretta Scena of Deer Park, N.Y. Micarelli knew Allen-Krauss through participating in the annual summer sessions of the Green Mountain Rug School, first as a student in the early 2000s and later as a teacher. Scena has also attended the school as a student.

Allen-Krauss' mother, Anne Ashworth, who lived in East Randolph, established the rug school in 1982. Allen-Krauss opened Green Mountain Hooked Rugs in 1999 and took over running the school in 2000. In 2014, the school's management was passed to Allen-Krauss' daughter Lindsay Krauss, who relocated the school from Vermont Technical College in Randolph Center to Montpelier's Capitol Plaza Hotel & Conference Center. Lindsay Krauss' sisters, Cecely Conrad and Mariah Krauss, also rug hookers, currently sit on the business' board of directors.

Micarelli and Scena envisioned a group exhibition in which each artist would design and create one card of the tarot's 22 major arcana. They reached out to friends and rug-hooking colleagues — hookers, as they call themselves — throughout the U.S. and Canada.

"We were a little reluctant," Micarelli said in a phone interview, "because we didn't want to offend anyone who was spooked by [the tarot] or thought it was wrong. We did have a couple of people not want to participate because it was the tarot."

Allen-Krauss, however, agreed and selected the Hierophant as her card. Her daughter Mariah joined in and chose the Magician. "I didn't know much about [tarot cards] until I was part of this series," Allen-Krauss said by phone.

In December 2015, the collected 23 rugs (the major arcana plus a deck design) made their national debut at Shelburne's All Souls Interfaith Gathering. The venue was arranged by participating hooker Rae Harrell of Hinesburg, who contributed the Wheel of Fortune rug. Burlington-based photographer Anne-Marie Littenberg took catalog photos of the finished works. Littenberg, a rug hooker herself, has said that her venture into photography was a direct result of trying to get images of her fiber art.

Thanks to Allen-Krauss, the touring exhibition is currently enjoying a second run in Vermont. The Green Mountain Rug School, now in its 35th year, will convene from June 18 to 25 for two summer sessions at Capitol Plaza, serving an estimated 150 to 200 students from around the country and world. Among the classes on offer are "Folk Inspired Geometrics," taught by Allen-Krauss, and "Textures in Pictorials," taught by Micarelli.

Last fall, Allen-Krauss approached Ginny Callan, executive director at T.W. Wood, in hopes that the gallery might host the show while school was in session so that students could see the works. The Wood's visual arts committee approved the exhibition, which opened on May 14. Montpelier-based intuitive counselor Sherri Glebus was on hand at the reception to offer free one-card readings to guests.

"We've had people from all over come to see this exhibition already," Callan said during a gallery visit. "Most of them are hookers."

Readers of the exhibition catalog will notice that the significance of social networks frequently imbues the works themselves. Mariah Krauss' rendering of the Magician is a likeness of her grandfather, and Lynn Fowler's Chariot features her granddaughter. Jennifer O'Rourke Lavoie of Huntington depicted her daughter with a mountain lion for Strength.

Besides working with Micarelli and Scena to bring "Exploring the Tarot" to Montpelier, Allen-Krauss has curated a companion exhibition at T.W. Wood, titled "Discovering the Tarot Card Artists," on view through July 15. This show features non-tarot works by participating hookers, some of which share characteristic elements with their tarot counterparts. Jule Marie Smith of Ballston Spa, N.Y., for example, is known for her intricate borders, which appear in both her Temperance and circus-scene rugs.

Next stop for "Exploring the Tarot" is Kerr Place, a historical society in Onancock, Va. — the hometown of Chariot hooker Fowler.

The original print version of this article was headlined "Hooked on ... Tarot? Handmade Rugs Reimagine Cartomancy"