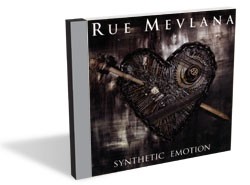 Among the myriad genres, subgenres and sub-subgenres that make up the Greater Vermont music scene, glam is relatively underrepresented, particularly the glitchy, electro-pop variety. But that’s not to say the Green Mountains are completely devoid of throbbing, beat-centric fabulousness. Rue Mevlana, a self-described supergroup led by songwriter and front man Nathan Jarvis, have been keeping savvy Burlington audiences sweaty and sated since 2005. Earlier this summer, the band released its latest album, Synthetic Emotion. The effort comes on the heels of a deliciously devious holiday EP, Dancing to Keep Warm, released late last year, and marks the band’s fourth full-length album.

Taken as a whole, the record’s 14 tracks represent a hypnotic 52-minute daze. Jarvis’ production is generally informed by house and techno, with just enough occasional breakbeat snap to yank the listener out of a trance. That’s not to say Rue Mevlana’s tracks are dull. They aren’t. Rather, these cuts yearn to be blasted from the bass-fortified speakers of a dance club. This is dance music, first and foremost. And the translation to the tinny confines of your earbuds might make for an underwhelming experience, at least to the casual listener. But there is good reason to listen closely.

The crux of the Rue crew’s appeal, aside from those frenetic dance mixes, is its subversive nature. That quality was made explicit on the band’s aforementioned Xmas romp, but it’s subtler on Synthetic Emotion. Jarvis and his bandmates, Marya Vallejos, Justine Crosby, Jess Mateik and Hannah Wall, specialize in cheeky, precocious songwriting delivered with a gleefully shameless brat-itude that reminds this critic of a more brazenly churlish version of Burlington indie-pop band the Smittens — whose music is far less cute and cuddly than you think, by the way. Imagine a strung-out Colin Clary riffing on douche-y celebs (“Scumbag Celebrity”) or a prickly Dana Kaplan taking Maverick to task (“Tom Cruise!”), and you’re in the ballpark.

Synthetic Emotion is Rue Mevlana’s most complete effort to date. Though it likely doesn’t do their infamously salacious live act justice, it’s an oft-titillating album that serves as a worthy introduction to glam pop in Vermont.