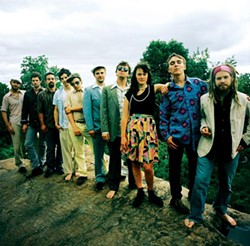 So there is a real solid band out of Boston by the name of Rubblebucket, known in a past musical life as Rubblebucket Orchestra. They play music that's best described as a cross between Fela Kuti-style Afrobeat and groove-oriented rock. Rubblebucket also shares members Kalmia Traver and Alex Toth with the prog-reggae outfit John Brown's Body. They've even got a local connection, as the band has its roots in a jam session at the 2007 edition of the always-awesome Burlington Jazz Fest. Back in April their album, Rose's Dream, got a positive review from Seven Days.

If this sounds promising to your ears, good news. Rubblebucket will be on the St. Mike's radio station, WWPV 88.7 The Mike, on Monday night with 'PV music director Mary Cate from 10 p.m. to midnight. If you're not within the station's listening area, you can listen to a live stream on the WWPV Web site. And then on Thursday, Rubblebucket's headlining a show at the Higher Ground Ballroom. Tickets are still available and are just $13 in advance. Dig it.