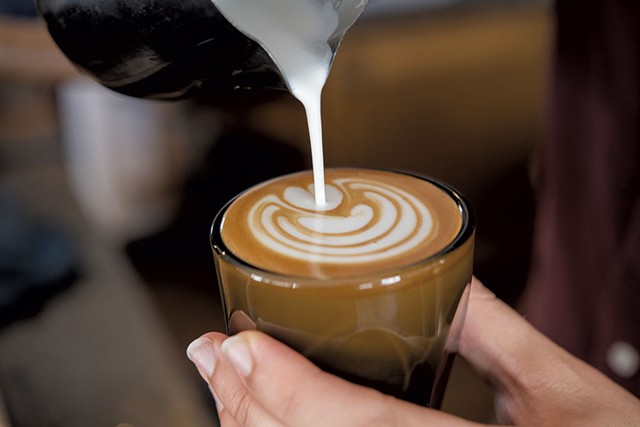 It takes guts to open a specialty coffee shop in a small town in Vermont — and it takes serious coffee evangelism and a whole lot of hard work to open two in the same year.

The two shops embody different versions of how Aless, 25, and Matt, 30, do coffee. Royal Oak is an approachable, unpretentious introduction to coffee nerdery with strong living room vibes, while Lost Monarch is an exploration of tasting profiles and rotating micro-roasters amid the bustle of the market, which also offers food, wine, books and more.

The Delia-Lôbos, both industry veterans, moved to Middlebury last winter to open Royal Oak after years of working behind coffee bars in their native southern Connecticut and the Boston area. They had regularly visited Matt's mother, who lives in Middlebury, over the past six years.

"Our first thought was that this place needs some kind of coffee," Matt said. Carol's Hungry Mind Café was still open when they started visiting (it would close in 2018), but there was nowhere to grab a cup of "third-wave" or specialty coffee — the responsibly sourced, high-quality artisan beans that modern coffee purveyors prize. Cursive Coffee filled that hole in 2014 and, for the brief time it was open, dashed the Delia-Lôbos' dreams of opening a café of their own.

"We said, 'Oh man, some jerks are beating us to it!' Then we went there and became friends with them," Matt said of the Cursive owners. "It was some of the best coffee we'd ever had, but they were too far ahead of their time."

"When they closed, we thought, Maybe there's no market here, even though it really seems like there should be," Aless said. Some entrepreneurs would have taken Cursive's fate as a warning and looked elsewhere, but Matt and Aless were set on Middlebury.

"Our whole shtick is to do things intentionally, consider everything and be nice." Alessandra Delia-Lôbo tweet this

"I've always had a thing for Vermont," Matt said. "It was really inspiring when the coffee scene started taking off up there, because I thought it had to be in a city."

During one visit, the couple stopped in at Burlington's Onyx Tonics, and they tried the wares of Winooski-based Vivid Coffee Roasters. Matt, who was running a guest roaster program in Boston at the time, quickly contacted Vivid's owner, Ian Bailey, to purchase some of his beans.

"When we had Ian's coffee at the cupping Matt did down there, we realized how much it stands out," Aless said. "And Ian as a person is so helpful and amazing. We could immediately see ourselves having a working relationship with him."

The couple left Boston, settled in Middlebury, and renovated and opened Royal Oak in the span of a few months. Establishing a close partnership with Vivid gave them the confidence boost they needed to jump into a new place and start a business.

They named Royal Oak after Aless' father's business — a reference to the tree where Charles II of England hid during a battle. Later, they would choose the name of another celebrated tree for their second shop: Lost Monarch is a sequoia in California's Grove of Titans.

"Right from the start, we could tell that people needed a place to call their own," Aless said.

At first, the staff was just the two of them, introducing themselves to each customer while they pulled shots of espresso and washed all the dishes by hand. The couple spent the first few 13-hour days smiling and talking nonstop. "We had major excitement hangovers on our first day off," Aless said.

Now they have six employees for the two shops and a strong roster of regulars, whom Royal Oak welcomes with cozy seating and thoughtfully curated music. That music is always a talking point, whether it's a record from the shop's vinyl collection or one of Matt's old-school cassette mixtapes; the selection ranges from George Benson to Brazilian music to Michael Bolton.

The menu at Royal Oak encourages questions, too, and the couple said that's intentional. They use lesser-known industry names for espresso drinks, such as a Gibraltar and a flat white; the menu doesn't list a cappuccino. Rather than a set price, the menu lists "market price" for single-origin espresso and hand-brew options. 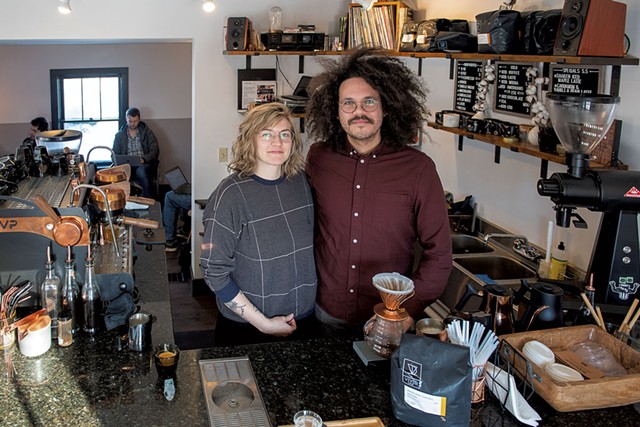 "Our whole shtick is to do things intentionally, consider everything and be nice. That's it," Aless said. "We want people to feel like they're welcome, that their order isn't wrong or bad because they want decaf or something with sugar in it."

The shop sells custom pastries from Molly Francis' Banoffi & Such, and they're all vegan — but not advertised as such. "We list all the ingredients on signs and let people realize it's vegan on their own," Matt said.

Terms such as "vinyl collection," "cassette mixtapes" and "vegan pastries" could get customers' hipster sensors dinging. Matt acknowledged that Royal Oak is "dangerously close" to fitting that image. But he and Aless said they don't embrace the exclusivity that's often associated with hipsters.

"We hope that people have a conversation with us instead of making assumptions, because we're just big nerds about everything," Aless said.

That nerdiness is rubbing off as customers embrace single-origin espresso and hand-brewed pour-over coffee. Royal Oak is currently serving a single lot of coffee beans that were grown by farmer Evin Gomez in Santa Barbara, Honduras, and sourced and roasted by Vivid.

Bailey purchased the coffee through the Beneficio San Vicente mill, which allows buyers like Vivid to work directly with farmers to determine a fair price. On Vivid's blog, he described this arrangement as an "incentive for producers to participate in the specialty market," because higher-quality coffees yield larger profits.

For Aless and Matt, the coffee they're serving represents an increase in transparency and equity in what has always been a murky and confusing supply chain. "Matt and Aless have a particular taste for unique and captivating coffees ... and it couldn't be in better hands," Bailey wrote on the blog.

Working with specific farmers and supporting sustainable coffee production makes sense to their customers in agricultural Addison County, the couple said. "We say, 'Hey, there are people growing this product, too, and we need to make sure they can afford to feed their families,'" Aless said.

At Lost Monarch, the couple is trying a different model, using a rotating roster of guest roasters. The shop opened using beans from Woodstock's Abracadabra Coffee.

The Stone Mill Public Market's downtown location, on the other side of the bridge from Royal Oak, makes it walkable from Middlebury College. "I don't know of anything like the Stone Mill, and the community aspect of it is huge for us," Matt said.

The Delia-Lôbos said their presence in the market has already helped change customer perceptions of coffee and opened up conversations about sourcing, tasting notes, quality and price point. Their location, right next to Dedalus Wine and Cheese, doesn't hurt.

"There's a nice taste parallel. If people enjoy that aspect of drinking wine, it's the same idea with coffee," Matt said. "It's already been interesting to watch people connect the two products in that space, and next to wine, we look good! Coffee is cheaper; you can get it to go and even have it in your car," he joked.

Two shops in six months wasn't in the couple's original plan, but the opportunity to be part of a destination such as the market was a no-brainer, they said. And elevating the coffee conversation in Middlebury is a nice perk.