Leave it to beavers to escape from their home and still come back in time for supper. No, this isn't an episode of the bygone TV show "Leave It to Beaver," about the escapades of a suburban boy who always winds up safely at home after 30 mischievous minutes.

It's the true story of BK, an orphaned beaver who lives in the woods of Roxbury, and his beaver BFF, Mrs. Beaver. The two animals, both yearlings, reside there under the care of John Aberth, a licensed wildlife rehabilitator.

One day in early September, the pair escaped from their outdoor enclosure, eating through the cage's eight-gauge wire. Mrs. Beaver hung around by the stream near the cage. BK wandered off and explored, probably not too far, before returning home for a late afternoon meal of willow and poplar branches.

"They're like Houdinis," Aberth said. "You always have to keep one step ahead of them."

Aberth, 58, is a medieval historian with a doctorate from Cambridge University in England; his area of expertise is the plague. Retired from teaching history, he drives a school bus in the Mad River Valley and works with his wife, Linda Hamilton, at her equestrian business, Figure 8 Riding.

"We're interconnected. We're all in this together." John Aberth tweet this

As one of 21 licensed wildlife rehabilitators in Vermont, Aberth spends much of his time learning about wildlife and applying his knowledge to injured or orphaned mammals and birds in need of care. This cadre of rehabilitators plays a vital role in the health and well-being of Vermont's wildlife population, according to Col. Jason Batchelder, director of enforcement for the Vermont Fish & Wildlife Department.

"We need them because they fill a role that only a civilian can fill," Batchelder said, noting that game officials sometimes euthanize injured or orphaned animals. Rehabilitators offer an alternative.

"They provide a position for these animals in between what got them into their current state of trouble and being rewilded," he said, calling wildlife rehabilitators "an extraordinary partner."

Aberth is mindful of not getting attached to the beavers and other animals he rehabilitates. His names for the beavers — BK (short for beaver kit) and Mrs. Beaver — are not pet names but identifying tags. His commitment is to nurse injured or ill animals back to health and to provide food, water and habitat until they can live safely and independently in their natural environment. To that end, he keeps a daily log of the animals' progress.

"Especially with climate change, we need to find a way to coexist with these animals," said Aberth, who is staunchly opposed to trapping, even as he claims to own the most fur coats of anyone in Vermont. (People send them to him, knowing that fur is desirable bedding for the animals he rehabilitates.)

"We're interconnected. We're all in this together," Aberth continued. "My role is to try to help people understand this — and to help them understand that you're better off having these animals alive than dead."

But there's trouble in beaver paradise. State officials say an enclosure Aberth built to house the beavers violates a statute that forbids discharging into state waters. And they've ordered him to remove it.

The cage in question is an outdoor enclosure that Aberth constructed for the beavers using two dog kennels. In June, BK and Mrs. Beaver moved into these warm-weather quarters: a 10-by-20-foot cage on Aberth's property set partly in a stream that flows into Flint Brook and partly on its bank. Water flows freely in and out of the big-holed wire contraption, and the beavers move between land and water in a structure that offers an approximation of the environment they'll inhabit upon their release.

"It makes for a better release, instead of just throwing them out into the stream one day," Aberth said. "It's getting them used to a natural environment that they'll eventually be put in permanently."

Aberth thinks that his is the only beaver enclosure of its kind in Vermont; he learned its design from an animal rehabilitator in New York State. The two beavers appear to be thriving under his care; BK has grown from one pound to 38 pounds in 16 months and learned to build with sticks.

However beneficial it might be to the beavers, the cage violates a discharge statute, according to Ryan McCall, an environmental enforcement officer with the Vermont Department of Environmental Conservation.

Last week, Aberth told Seven Days, he came home from driving the school bus to learn from Hamilton that, while he was gone, McCall had showed up at their house and informed her of a complaint regarding the beavers' outdoor enclosure. The officer said it was a violation and had to come down "immediately," Aberth said.

"You cannot discharge anything to state waters," McCall confirmed to Seven Days. "Right now, there's a cage in state waters." He said the cage and animal waste constitute discharge but declined to comment further, noting that an investigation is ongoing.

A week after Aberth was told to remove the cage, he said it remained in its spot in the woods and stream, and the beavers were still living in it, according to Aberth.

"I'm trying to resolve the situation," he said. He hoped to talk with state officials to get a better understanding of the alleged violation and work out a solution.

Life for animals and people seems pretty good at Aberth's place, on remote land at an elevation of 1,400 feet. His log cabin is down the road from the farm where he spent childhood summers with his family, a property he and Hamilton now own.

One summer when Aberth was a boy, his brother and a friend found a sick and starving hawk on the side of the road. His brother brought the bird home to try to save it, but it died.

"It inspired me to train to do something for these animals," Aberth said. "I said, 'I can do better.'" 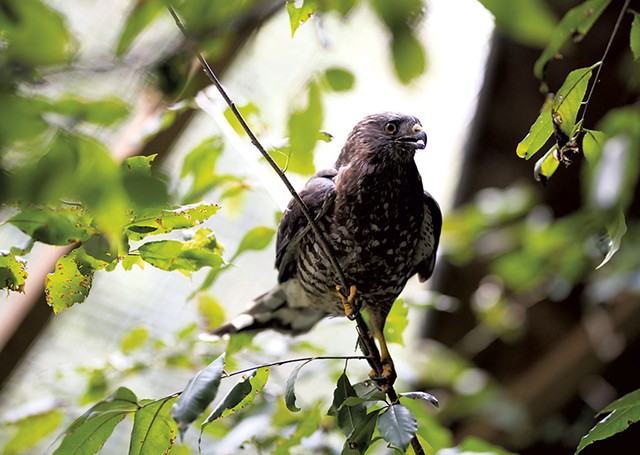 Trained in avian rehabilitation at Quechee's Vermont Institute of Natural Science, he works with raptors and mammals. The birds he's rehabbed — barred owls, ravens and falcons — live in a geodesic dome he built. The structure is 26 feet in diameter and 13 feet high, with saplings and a ladder for perching.

BK was a week old and weighed barely a pound when he was found alone in St. Albans in May 2020. The man who found him contacted Aberth, who agreed to rehabilitate the baby beaver and picked him up at a park-and-ride in Montpelier.

Taking in the baby animal was roughly a two-year commitment, during which BK would "learn skills and get fat enough" to survive on his own, Aberth said. Early on, the project was well suited to the isolation imposed by COVID-19.

Aberth fed the baby beaver formula from a bottle and placed him in bathtub water. Later, he made a pen for BK in the basement with a water trough that he drained each day with a sump pump and refilled with clean water. For a time, BK had two pools of water: one to play in and one for a bathroom, uses that he came up with on his own.

About a year into BK's life in Roxbury, in the spring of 2021, Aberth got a call about an injured and orphaned female beaver in Marshfield. He drove halfway there to pick up the ailing Mrs. Beaver, who was about a year old.

Mrs. Beaver arrived with two infected abscesses that Aberth treated. He put her in a pen in the basement, separated by a metal railing from BK, who hissed at her. The two animals could see and sniff each other while getting used to each other from their distinct spaces. One day, about two weeks after Mrs. Beaver moved in, Aberth came downstairs and found the beavers together.

"They just somehow broke through that divided railing and got together, because they really wanted to be together," Aberth said. "They were lying side by side. They're very smart."

In June, he moved the beavers outside to the special enclosure, where they can learn beaver skills in an environment that offers woods, earth, mud and flowing water. Inside the cage is a little hutch where the beavers can hide and sleep. Sometimes, when Mrs. Beaver hears Aberth coming in the morning, she dives underwater and stays there for many minutes before reappearing.

Aberth plans to release the beavers in the spring of 2022. He hopes that the state will allow the animals to stay in their outdoor enclosure — the place he considers better for them and for him — until cold weather prompts a move indoors.

If they can stay outside until the weather turns, he wouldn't be surprised to witness another beaver escape — and return.

"A young beaver will get out, but he'll come back," Aberth said. "He wants his food. He wants his safe space."

Learn more and find a map of licensed Vermont wildlife rehabilitators at vtfishandwildlife.com.

The original print version of this article was headlined "Creature Comfort"