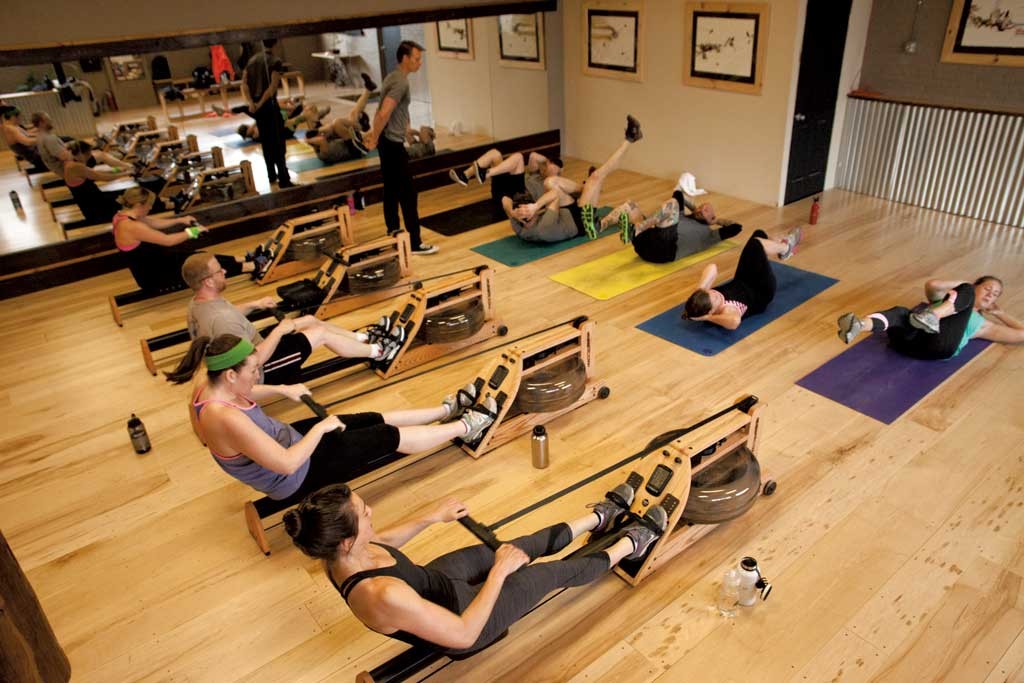 I've never been a big fan of the Police, but on a recent surprisingly sultry evening in Burlington's South End, the final strains of "Message in a Bottle" seemed especially appropriate to the workout I was enduring. Just as Sting was "sending out an SOS," I wanted to send out my own — for someone to rescue me from this maddening machine. Early in the fitness class, it was making me a little dizzy, nauseated, exhausted and bored all at the same time.

"It" is a rowing machine — but not just any old ergometer that's been gathering dust in the corner of a gym. Michael Blount, who launched the new indoor rowing studio Row VT on Flynn Avenue last month, promised me that this "fun, innovative machine" would hit 84 percent of my muscle mass and burn up to 600 calories in a 45-minute class.

"Rowing builds your body without adding the bulk," Blount added. He said his approach to the classic aerobic workout involves fostering team-building challenges while encouraging gym-goers to "break a sweat, get stronger and leave class feeling better with a big smile and positive mindset."

By investing exclusively in water-based rowers for the studio, Blount is riding the wave of one of the latest fitness trends. As the New York Times reported last fall, the old boys' sport of rowing has become a new way to get ripped, thanks to the popularity of CrossFit — which incorporates rowing machines in some workouts — publicity from "The Biggest Loser," and the new punch of upbeat music and intervals. Celebs including Cameron Diaz and Kevin Bacon are on board, as are hundreds of gyms nationwide.

Having experienced the agony of rowing crew on a frigid Massachusetts river in high school — and, more recently, having endured the intense indoor pulling sessions of CrossFit — I was wary of trying Row VT. Besides, with rising temperatures outdoors, a good old-fashioned run was beckoning. Despite my reluctance, Blount's space at Tao Motion Studio, with its hardwood floors and happy crew of devoted rowers, was warm and welcoming.

"The class is intense, but Mike is a fantastic motivator and excellent teacher," said Tammy Bushell, a 47-year-old Ferrisburgh resident who also does Zumba at Tao Motion. "The water-based rowing machines are unique and put a different element into the class."

Ah, the water-based rowing machines. Unlike traditional ergometers, or ergs, which have vertical flywheels and chains, the machine on which I found myself seated has a horizontal flywheel with water sloshing around on the inside. This WaterRower, I later learned from the company's website, was designed in the mid-1980s by a former Yale University and U.S. National Team rower "to emulate the exact dynamics of a boat moving through water."

The machines are made from ash, cherry and other hardwoods in Warren, R.I., which makes them relatively local and sustainable — a nice touch. I appreciated the soft foam grip of the handles.

But as Blount, sporting a stylish turquoise lululemon athletica top and gray shorts, began the class, the niceness faded. Aiming to match my cadence — or strokes per minute — to that of the other students, I was initially distracted by the motion of the water. Then Blount instructed us to hop off for "hybrid mobility" work.

That's another key difference between today's rowing movement and those of years past. Instead of spending thousands of tedious meters on the machine, we were alternating between intervals of 500 meters and exercises such as forward bends, push-ups, squats and planks.

"As the intervals get shorter, the intensity gets higher," explained Blount. Sure enough, after we'd picked up speed for the next rowing session, we found ourselves gasping through "mountain climbers" and reverse lunges.

"I wanted to create an effective workout that's fun, competitive and easy to learn with a low risk for injury," Blount told me after the class. He grew up in Middlebury playing football, basketball and lacrosse, and then studied business management and exercise science at Castleton State College. His fondness for rowing came later. "My first memory of being on an erg, about 10 years ago, was not a pleasant one," Blount admitted with a laugh. "I don't remember what kind of speed I had back then, but I faintly remember telling my workout partner that if I passed out, please note my time!"

While working as a trainer last fall in Beverly Hills, Calif., however, Blount witnessed how water-based rowing machines, along with the hybrid workouts developed for them (now branded as Indo-Row and Shockwave, among others), could combine the benefits of strength training, Pilates and flow yoga with cardiovascular conditioning. He now offers four types of classes at Row VT, from the entry-level Signature Row, which reviews technique and form, to the Endurow sessions that feature 5,000-meter bouts. Making exercise fun and removing the intimidation factor are key, he said.

During the Shockwave class that I attended, I eventually adjusted to the movement of water in the machine and found myself focusing instead on the screen that displayed my time. I tried to beat my own numbers each time I hopped on the seat. When we moved over to the mats for more squats and mountain jumpers, the shift added just the right amount of variety.

By the end of the 45 minutes, I was ready for the relay challenge: Sheri Senesac and Brian Cavanagh versus me and Bushell. To the sounds of Macklemore & Ryan Lewis' "Can't Hold Us," we furiously raced through two sets of 250 meters. Senesac and Cavanagh beat us by just a few meters.

"I'm not a competitive person, and to have to compete while exercising was not appealing to me," confided Senesac, 49, of Colchester, after our race. "But with Mike's gentle nudging and the idea that I'm challenging myself to do better each time — not to beat the others in the class — the reward is taking me out of my comfort zone."

Burlington yoga teacher Julia Howe Sullivan, 28, said she has found the rowing classes an ideal complement to her own practice. "The studio is beautiful, very NYC without being pompous," she wrote in an email. "And Mike is energetic without being crazy and annoying."

Row VT regular Steven Kind, 50, of Essex, said he appreciates Blount's "holistic approach to his various workout programs," finding it a good match for his own lifestyle, fitness goals and schedule.

As for me, by the end of the class I was no longer sending out an SOS but enjoying the water-based machine, the camaraderie and Blount's motivating workout. The experience turned the tide of my feelings about indoor rowing — even though I might choose real water on Lake Champlain over the stuff inside a flywheel during the warm months ahead. I'll bet that Blount — who's way more engaging and attentive than my old high school crew coach — will be at Row VT when the cold returns, and long after that. His goal is to establish his studio as a leader in the industry by integrating mindset, nutrition coaching, juicing, goal setting and team building into the program.

"I really want to inspire others to live a healthy and fit lifestyle, improving every day," he said. "I hope to create a ripple effect in the community."