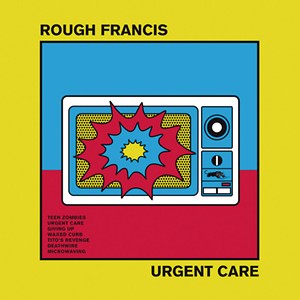 Look, if you don't know the story of Rough Francis — and by extension their progenitors, the famous punk outliers Death — I'm not wasting my precious word count catching you up. Go watch Jeff Howlett and Mark Christopher Covino's 2012 documentary A Band Called Death about brothers Dannis, David and Bobby Hackney, and how three black kids playing punk music in early 1970s Detroit took Motown by storm. It's a great watch, sure, but the film also introduces the world to the sons of Death and the next generation of Hackney rockers: Rough Francis.

Since the doc dropped eight years ago, Rough Francis have made a name for themselves and reigned as the Burlington it band ever since. They've released records dripping with raw energy, political bite and pure musical muscle — 2018's MSP3: Counter Attack, especially, was a blast of garage-rock energy. They've played shows that are still talked about years afterward.

What the band hadn't done, however, was truly capture the power of its live sound on record. So for their recently released album Urgent Care, Rough Francis turned to an outside producer: Kurt Ballou of Boston hardcore band Converge. The results are irrefutably ferocious.

The rest of the band then explodes behind drummer Urian Hackney's groove, and the tone and feel of the song becomes something unlike anything Rough Francis have recorded before. There's a leanness to the new songs that augments an already loaded band. To say a group as historically tight as Rough Francis has tightened up might seem dubious, but Ballou has gotten the quartet to arrive at that point even sooner than in previous efforts — the record clocks in at a breezy 18 minutes.

Though it was written and recorded before the pandemic, there's a, well, urgency to Urgent Care, particularly the title track. Here, the band absolutely rages in a storm of punk energy, whiplash guitar and Urian's frenetic drumming. But when lead singer Bobby Hackney Jr. screams, "They don't know if I'm OK / They can't say that I'm OK," Lord, but that hits close. Rough Francis have always embraced their political side, but America's broken health care system has been found out by COVID-19, and "Urgent Care" definitely feels like an anthem for the scared, sick and confused.

"Microwaving" finishes the album in style, with guitarist Julian Hackney ripping out a taut lick before the band gangs up to unleash a punishing groove. The writing and arrangements seem more intentional this time around and, paired with the added sonic weight that Ballou brings, Urgent Care is the band's most accomplished record to date.

It's sad that we won't immediately experience the other half of the Rough Francis equation — namely, seeing them tear up these songs onstage in front of a mosh pit. The band bumped Urgent Care's digital release up a few months to give their fans something to listen to while quarantined. Eventually there will be a physical release, as well, but that will likely coincide with the band's return to live performances.

Until then, pop over to roughfrancis.bandcamp.com to stream the new record. Crank the volume, fuck the neighbors, turn your living room into a club and start your own pit.

Correction: May 20, 2020: An earlier version of this story misstated the manner in which Urgent Care was released. It is a self-released digital album.