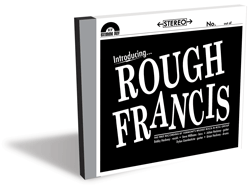 When Chicago’s Drag City Records released the lost 1974 recordings of Detroit band Death …For the Whole World to See in early 2009, it was a revelation. The seven-song collection bridged the gap between Motor City proto-punk bands such as Iggy and the Stooges and the advent of New York City punk years later. For rock scholars, the album was something akin to an anthropologist unearthing the missing link.

Vermonters were doubly thrilled. We dug the recording, sure. But we also had the unique pleasure of discovering Death through its most direct descendants, Burlington’s Rough Francis. Centered on brothers Bobby Jr., Julian and Urian Hackney, the band has provided local audiences with a living link to Death. With a sonic assist from guitarist Dylan Giambatista and bassist Steven Hazen Williams, the brothers Hackney faithfully — and at times, eerily — re-created the music made by their father, Bobby Sr., uncle Dannis and late uncle David in a Detroit garage three decades ago. For a little more than a year now, Burlington has been home to the most genuine tribute band on the planet.

Of course, with only a handful of tunes to pull from, Rough Francis’ repertoire has been necessarily limited, their incendiary live shows typically short and sweet. But a new EP of original material, Introducing … Rough Francis, suggests rock ’n’ roll innovation really does run in the family.

“Don’t Look Back” leads off with big, juicy, Townshend-esque guitar sustains ringing out over Bobby Hackney Jr.’s manic howl. “Hangin’ On” grinds purposefully with MC5-inspired urgency. On “Waiting,” the band stretches out, matching frenzied punk energy with a truly inspired arrangement featuring hairpin twists and turns and breakneck rhythmic changes. “Blind Pigs” closes the disc on a fiery but poignant political note. It all sounds, well, a lot like Death. Which, of course, is precisely the point.

Under normal circumstances, it would be unfair to compare the work of an artist to that of his parents — or uncles, for that matter. While these four songs certainly stand on their own merit, it is prudent to draw the comparison here. Next to David Hackney not living to see the world appreciate his music, the great tragedy of Death is that there will never be new Death songs. But in a way, Rough Francis have changed that. They have become the missing link for a new generation of fans. And as long as we have them, Death live on.

Rough Francis celebrate their debut EP with a release party at Nectar’s this Friday, March 19, with Blowtorch and The Fatal Flaws.