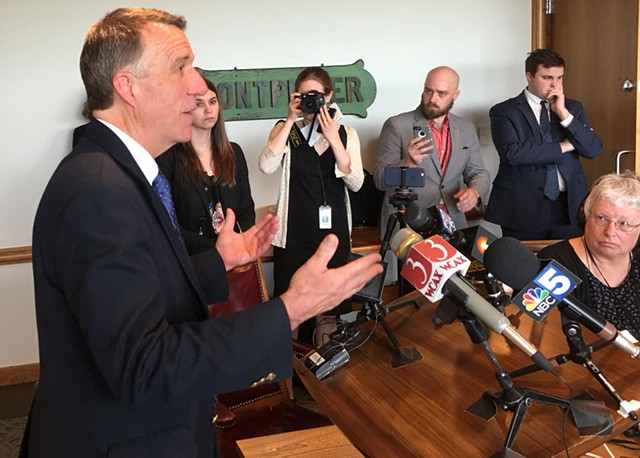 It was a moment that exposed our nation's ambivalent attitude toward marijuana.

As he announced last Wednesday that he would veto a pot legalization bill, Vermont Gov. Phil Scott unintentionally revealed the hypocrisy at the heart of the debate. While rejecting the measure, Scott acknowledged that he has "a lot of friends" who smoke marijuana. That prompted the Vermont Press Bureau's Neal Goswami to ask whether those friends should be getting civil violations.

"Maybe. I don't know," the governor replied. "I think we've backed off on that. I don't think anybody's receiving—"

"This [bill] would prohibit that, right?" Scott said.

"But I'm asking now, should your friends be ticketed?" asked Goswami.

And there it is: a nod and a wink. Marijuana is illegal — even dangerous, some would argue — but hey, smoke 'em if you got 'em. No harm done. You won't get busted, right?

Actually, you might. Vermont decriminalized marijuana in 2013, and the immediate result was a sharp uptick in civil violations. In the first year of decriminalization, according to the Associated Press, police cited twice as many people for marijuana-related offenses as they had the previous year, when possession of small quantities was a criminal offense. Goswami was right: Plenty of people are getting ticketed for pot.

At issue last Wednesday was S.22, a marijuana legalization bill passed by the Vermont legislature four weeks ago after years of debate. It would allow cultivation and possession of small quantities of cannabis and create a commission to identify a path toward full legalization. Even as Scott vetoed the bill, he claimed it only needed a few fixes. Those could easily be accomplished, he asserted, during a scheduled two-day legislative session starting on June 21.

At his veto press conference, Scott exhibited a familiar pattern: appearing to say more than he actually is and speaking on more than one side of an issue. Sen. Dick Sears (D-Bennington), an advocate of legalization, observed that Scott was "all over the place" in his veto message.

Indeed, Scott left reporters wondering what his terms were for signing a legalization bill. He read an outline of his objections and demands, but he declined to give specifics.

"Not today," he said. "But if there's a willingness for the House to move forward, for the Senate to move forward ... we'll provide those [specifics] and work with them."

In other words, you go first.

Legislative leaders reacted to the veto with more than a little puzzlement, given the limited nature of Scott's objections. Throughout the session, they say, the administration stuck to its broad opposition and never dealt in specifics.

"They were not participating," said Rep. Maxine Grad (D-Moretown), chair of the House Judiciary Committee, where much of this year's deliberation took place. "I would have very much liked to have heard this type of testimony in the room."

Scott acknowledged that he was caught off guard by the passage of S.22.

"It was a bit of a surprise, to be perfectly honest with you," he said. "As you know, it came together in the last three or four days ... We did not have an opportunity at that point to weigh in. It may be a miscalculation on my part. I thought we were going to have the discussion next year."

It's hard to imagine previous administrations being guilty of such an oversight. But even if you take Scott's reasons at face value, why weren't his people tracking the issue closely and weighing in at every opportunity? Marijuana legalization was on the front burner throughout the 2017 session.

Still, Scott does make a valid point about the pitfalls of fast action.

Perfectly reasonable, except that this is the guy who produced, in late April, a plan to overhaul the bargaining process for teacher health insurance benefits — and insisted on legislative action almost immediately. I guess fast-tracking is OK when it's a bill you support.

In expressing his willingness to negotiate changes in S.22, Scott drew a tenuous distinction between allowing personal use of marijuana and legalizing it totally.

"What you do behind closed doors in your own home, as long as you're not affecting others — the innocent, so to speak — is OK," he said. Which assumes that what you do at home will stay at home. Throughout the marijuana debate, Scott has insisted on a roadside impairment test for cannabis — but he apparently doesn't care if such a test is included in S.22. His only demand is for tougher penalties for those who smoke in a vehicle when children are present.

Scott makes accommodating noises to full legalization. He sees the momentum in nearby states and in Canada. "We have to recognize the vast amount of support there is in moving forward with some form of the use of the substance," he said.

But his opposition to a fully regulated marketplace, which would be outlined by the commission established in S.22, remains unchanged. He would insist on a reliable roadside test for driver impairment, which doesn't exist, and an impairment threshold for drivers, which has yet to be determined. He also wants the commission to produce "a detailed estimate of the general fund revenue required for the adequate regulation, enforcement, administration, education and prevention recommendations it shall make."

I guess he's tired of hearing about all the tax revenue and jobs that would be created by a legal marketplace.

At this point, action on S.22 during the upcoming two-day session appears unlikely. The legislature will have to tackle the budget and teacher health care bargaining. There seems to be no appetite for extending the session, and passing a new version of S.22 in two days would require suspension of legislative rules. The House Republican minority would have to assent to that, and Scott won't try to persuade them to do so.

"I'm not twisting arms one way or the other on that one," Scott said.

House Republican leader Don Turner (R-Milton) isn't twisting arms either. "I've been consistent and my caucus has been consistent on how we approach rules suspensions," he said. "We talk about it, and then we vote on it."

Turner himself opposes legalization, and he's just fine with putting off the issue until 2018. "I see no reason why we don't just deal with it in January, when we can allow the proper vetting," he said.

That would be a disappointment to legalization supporters.

There's a novel approach. Don't listen to what a politician says; pay attention to what he does.

How much? Try $8.9 million in fiscal year 2016. And that doesn't include VPR Next, a capital campaign that's raised nearly $10 million over three years for a recently completed facilities upgrade and a "news and programming innovation fund."

Those figures may induce slack-jawed astonishment among Vermont nonprofits. But VPR is an expensive operation to maintain. Just ask CEO Robin Turnau.

"We're not like a WBUR in Boston, for instance," she explained. "They have one FM radio station. We have 26. We have a classical network and a news and information network. It's costly to do business in our beautiful state."

Let's try a more pertinent comparison. New Hampshire Public Radio covers similar terrain. It has a total of 13 stations and serves a population more than twice as large as VPR's. In fiscal year 2016, NHPR spent $7.3 million.

VPR's money supports an organization that's grown by leaps and bounds from the early days of public radio. That means more reporters, more producers ... and a lot more fundraising staffers. Thirteen, to be precise.

"We have grown dramatically to serve our audience, and it takes money to raise money, you might say," Turnau observed. "Back in my early days, it was very much reliant on pledge drives. They are still part of our fundraising menu, but only about 20 to 25 percent of our revenue comes from pledge drives now."

Most of the rest comes from major donors, corporate underwriters and roughly 13,000 monthly donations. That's a lot to manage. In the early days, public radio was a tugboat; now it's a battleship.

Undoubtedly, running a $9 million organization is a complicated task. But in a time when other news media are in serious decline, how is VPR using its vast resources to pick up the slack?

The news department lists 22 names, a substantial quantity. But many of them are working on productions that have little to do with news. In terms of actual reporters covering actual beats, Turnau estimates that VPR employs the equivalent of six and a half people.

It's fair to wonder if that's enough, when serious journalism is in short supply and VPR is putting out stuff such as "VPR Café," "Art Hounds," "Awesome Etiquette" and "But Why," its curious-kids podcast. That's only a sampling of its long list of lifestyle-y programming. There's nothing wrong with lighter fare, but in terms of VPR's public-service mission, the balance seems to be off.

"I think we do a lot of hard news, but we do it in a different way," Turnau argued. But she also recognizes the need to do more.

"We're going to invest more in investigative reporting," she said. "We recognize that the landscape is changing in Vermont, and we want to be even stronger in the area of holding people accountable and making sure that we can dig deeper."

Still, VPR occupies some priceless real estate, both as a nonprofit and as a news outlet. There isn't room for another, competing service. And in the words of Peter Parker's Uncle Ben, "With great power comes great responsibility."

For sure, VPR does a lot of good stuff. But it has great power. Is it fulfilling the responsibility?