A Vermont author shares veggie quirks in a new book 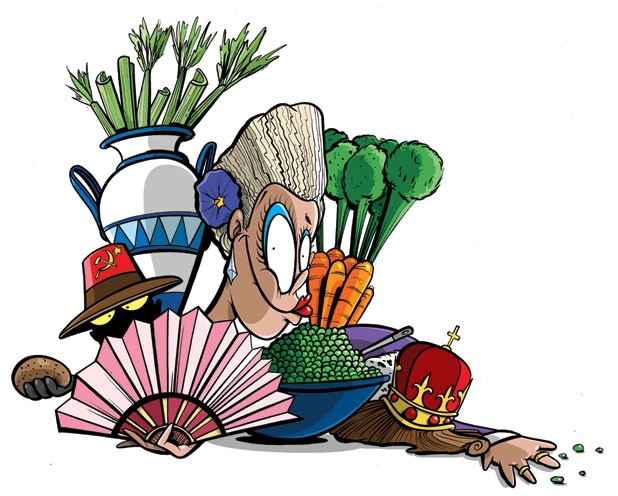 Next April 14, on the hundredth anniversary of the sinking of the Titanic, Rebecca Rupp plans to prepare a feast based on the ship’s final menu.

“That’s a gruesome party, Beck,” says her husband, biotechnologist Randy Rupp, when she makes this suggestion.

“We don’t have to go as far as playing the hymns,” Rebecca answers with a smile. The author of the newly published How Carrots Won the Trojan War: Curious (but True) Stories of Common Vegetables, Rupp is just thinking about the food — and the stories. In her book, facts are packed as densely as kernels on an ear of corn. Each chapter is devoted to a different vegetable or family thereof, with anecdotes about their surprising histories. Many are laugh-out-loud funny.

Today, at her Swanton home, Rupp is doing advance prep for her Titanic anniversary festivities by making the soup that was served to third-class passengers as their final meal. It’s an apt starting point for sharing her tales: a hearty combination of vegetables ranging from lowly beans and potatoes to surprisingly luxurious asparagus, stewed together in chicken broth.

Rupp doesn’t consider herself a cook, though she keeps a garden each year; the soup is an experiment. “If it’s horrible, all you have to say is it was for the third class,” she suggests.

Carrots is the noncook’s first foray into food writing; her background is in science. Armed with a PhD in cell biology and biochemistry, Rupp has proved herself as a nonfiction author with years of science freelancing; she’s also produced children’s books that were nominated for the Dorothy Canfield Fisher award.

A lifelong voracious reader, Rupp can’t pinpoint when she started work on Carrots. She attributes much of the knowledge shared in it to a lifetime of eclectic literary choices. These are amply evidenced by the office she and Randy share in their home on Hog Island, with its perimeter of towering bookshelves that puts most libraries to shame.

“I really love doing this kind of thing,” says the seasoned researcher about Carrots. “The only thing I worried about was, I wanted to avoid what my kids call my Pliny side. I wanted it to feel more like a fun book to read.”

In fact, the ancient Roman’s dry Naturalis historia was one of the scores of botany books, cookbooks and gardening guides Rupp used to research Carrots. Other sources varied widely, from Isabella Beeton’s authoritative 1112-page Mrs Beeton’s Book of Household Management, published in 1861, to interviews with the curator of the World Carrot Museum, an online resource run by “this British guy who’s really hooked on carrots,” as Rupp puts it.

Carrots are one of the first ingredients in the pot for the author’s Titanic soup. Like the ill-fated passengers, notes Rupp, though much earlier, those members of the Apiaceae family migrated across the Atlantic. “Queen Anne’s lace is a carrot escapee,” she says. “It escaped from actual gardens; the carrots were brought over by colonists. Same with wild asparagus — we’ve got a lot of wild asparagus. It’s not a native plant. It escaped from colonial gardens.”

Carrots may be hardy vegetables, but how do they win wars? According to one passage in Rupp’s book, ancient purple carrots were what “Agamemnon’s soldiers legendarily munched (presumably quietly) inside the Trojan horse to ‘bind their bowels’” so they wouldn’t need bathroom breaks. So much for the powers of roughage.

Next into the soup are potatoes, peeled and coarsely chopped — one of the dietary staples of third-class passengers on the Titanic. Just a few generations removed from the Irish potato famine, notes Rupp, those passengers may have had a Vermonter to thank for their plentiful starchy diet. Albert Bresee of Hubbardton was responsible for cultivating the popular Early Rose potato in the 1860s. It begat the Russet Burbank, the spud we still know and love.

Carrots describes the havoc wreaked in the 19th century by potato shortage: “The 1846-48 potato failures were blamed on everything from steam locomotives to volcanic eruptions, gases from the newly invented sulfur matches, and elusive ‘aerial taint’ from outer space, wet weather and (from Charles Trevelyan, director of Britain’s famine relief program) God’s will.” The real culprit was Phytophthora infestans, or late blight, which hardy breeds, such as the Early Rose, managed to withstand. But the destructive organism is alive and well, says Rupp as she plops potatoes into the pot; both Russia and the United States considered using blight as a biological weapon during the Cold War.

Cans of corn and beans are the next additions to the soup. Followers of Pythagoras would have to eschew this dish, says Rupp: Meat, fish and legumes were all verboten to those ancient Greeks, because the philosopher preached that people could be reborn as animals — or beans. Rupp hypothesizes that Pythagoras’ unusual dietary prohibition may have stemmed from a case of favism, a genetic disease that causes severe, potentially lethal reactions to bean plants. Favism is particularly common in the Mediterranean, making the mathematician a prime candidate.

Though beans didn’t kill Pythagoras, their ancient relative, the pea, has been implicated in a murder or two. Peas don’t go in the Titanic soup, but Rupp can’t help but mention them. “Peas were kind of fun, because they were accused of poisoning so many people,” she says. “George Washington almost got poisoned on peas. King John of England — Robin Hood’s King John — one of the rumors was that he died after eating seven bowls of peas.”

Rupp pours packaged chicken broth into the pot and sets to snapping the tips off slender asparagus. A quick look at the plant indicates the lascivious bent of most asparagus stories, though Rupp admits most long, lean veggies suffer from similar comparisons. When Muse magazine, Smithsonian’s kids publication, runs selections from her carrot chapter in an upcoming issue, they will be expurgated of penile comparisons.

Strangely, says Rupp, cucumbers seem to have escaped such literary winks and nudges. That’s despite the fact that the melon’s odor has been noted to increase blood flow to ladies’ nether regions.

With the soup boiling away on the stove, Rupp sits down at her kitchen table to chat. One wall of the room is the exterior of a log cabin that once belonged to her step-grandmother, who farmed 20,000 turkeys at a time on this property. Rupp and her husband expanded the house in 1993 but kept the historic, country-cute cabin intact.

With Carrots out in the world, Rupp is keeping busy with eclectic assignments. She’s currently researching a magazine piece on the history of mirrors. Her new children’s book debuts next summer. Tentatively titled Daniel Anderson’s Book of the Dead, the novel deals with a young boy’s grieving process following his brother’s death in the Iraq war.

Rupp is also working on a biology textbook — a gig she got from an editor who had read Carrots. Ever the scientist, she’s excited to find new, engaging ways to share her passion. It should come easily; she homeschooled all three of her now-grown sons, whom she calls “weird but fun.”

While she doesn’t spend her days cooking, Rupp is as fascinated with food as most folks are these days. And she’s pleasantly surprised by her hearty soup. The chicken broth imbues the veggies with a salty, rich flavor.

The food history presented in Carrots doesn’t always have an agenda, but Rupp nods to contemporary concerns with an introduction about the purposes of gardening in today’s society and a discussion of the locavore movement. She hopes books like hers, which remind readers how food and culture develop in tandem, will contribute to consumer awareness. “All of a sudden, people are really fascinated by cooking, gardening and where food comes from,” Rupp says. “We’re really starting to pay attention to what’s fresh, what’s organic and what was dumped on our food.”

And readers who pay attention to the nuances of heirloom carrots and potatoes may just pay for another food book by Rebecca Rupp. She’s banking on it.

When she’s not busy with her other projects, Rupp is reading up on fruit — and eager to share what she’s learned. She begins a tale from Martin Van Buren’s presidential campaign, saying, “I’ve got a great story about raspberries...”

From How Carrots Won the Trojan War:

Peter Rabbit didn’t eat carrots. No, really: he didn’t. Once he wriggled under Mr. MacGregor’s fence, he gorged on lettuces, beans, and radishes; then, feeling sick, he went in search of parsley. At that point he rounded a cucumber frame, encountered the justifiably enraged Mr. MacGregor, and spent the rest of the book running. That evening, still without a carrot in sight, he was put to bed with a dose of chamomile tea.

Rabbits will eat carrots, but, frankly, carrots don’t seem to be all that high on the rabbit food list. Their preferred vegetables are peas, beans and beets.

People, on the other hand, adore carrots. Each of us now consumes about twelve pounds a year (up from a mere four in 1975), and kids, who routinely turn up their noses at squash and spinach, list carrots among their vegetable favorites. Historically, though, foremost among carrot fans was Henry Ford, whose passion for carrots was second only to his passion for the automobile.

Ford was anti-milk (“the cow is the crudest machine in the world”) and anti-meat (he touted oatmeal crackers as a substitute for chicken), but he was devoted to the carrot, which — he was convinced — held the secret to longevity. At one point he was the guest of honor at a twelve-course, all-carrot dinner, which began with carrot soup and continued through carrot ice cream, all washed down with glass after glass of carrot juice.

One story held that Ford became interested in the painter Titian when his son Edsel donated a Titian painting (“Judith and the Head of Holofernes”) to the Detroit Institute of Arts. It wasn’t the artist’s work that caught his fancy; it was the fact that Titian had lived to be 99.

He wanted to know if Titian ate carrots.