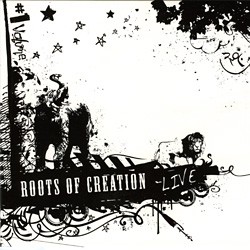 This just in: The spirit of late, great reggae-rock outfit Sublime is alive and well. That’s not really breaking news to anyone who’s ever walked through Burlington’s college ghetto on a warm spring afternoon. Even some 12 years after lead singer Brad Nowell’s fatal heroin overdose, the strains of “40 Oz. to Freedom” and “Smoke Two Joints” serve as the soundtrack to many a backyard beer bash.

Perhaps that band’s narcotic timelessness helps to explain the popularity of Boston’s Roots of Creation. The quartet takes its name from a relatively little-known Sublime tune, but the hero worship doesn’t end there. With their new live album, Live Volume #1 — the bulk of which was recorded at Nectar’s — the band submits Exhibit A as to how they have built a strong regional following amongst the beer ’n’ bong set: jammy reggae-rock owing far more to “Santeria” than “No Woman No Cry.”

The Sublime comparison may not be fair, but it’s unavoidable, especially given lead vocalist, guitarist and primary songwriter Brett Wilson’s propensity to flat-out ape Nowell. It’s hard to believe the mimicry is unintentional. From the album’s opening salvo, “Oh Lord,” Wilson doesn’t merely acknowledge his primary influence; he attempts to resurrect him.

The trend continues throughout. Wilson treads on familiar ground in his writing: “Music sets me free,” “music is my soul,” and so on. It’s all subject matter addressed at length by the late Sublime front man. The difference is that Nowell simply did it better and with greater authenticity.

Musically, the group is tight. Instrumental performances are solid across the board, especially for a live recording. And when not playing the pseudo-tribute act, ROC manage to pull of some nifty sonic shenanigans. Their arrangements are fully realized and executed. It’s perfectly clear why Roots of Creation are popular in jam circles. They have a strong grasp of structure and a knack for bringing back the hook just at the apex of anticipation. The heady electronica forays are a nice touch, too.

Roots of Creation return to Nectar’s this Friday.