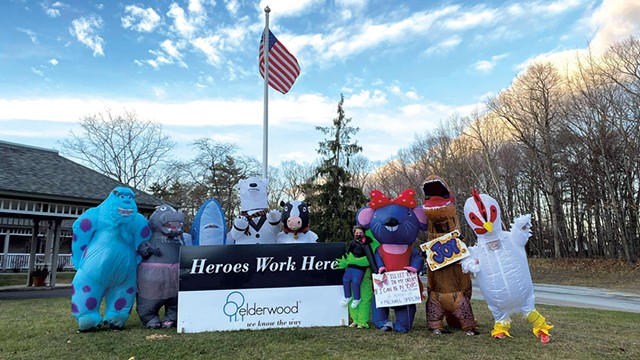 Jenny and Dave Rooke have operated Rookie's Root Beer from their home in Burlington's New North End since 2005. They sell soda almost exclusively on draft at restaurants and at the Burlington Farmers Market. After the pandemic torpedoed sales, the Rookes didn't have the capacity to revamp their distribution model to sell cans to stores or ship to customers.

Shortly after "our world shut down," as Jenny put it, she received a gift from a girlfriend. It came with a note: "Sorry you just lost your business, but here's an inflatable dinosaur costume. I hope it brings some joy to your life." With little else to do, Jenny put on the costume and started walking up and down North Avenue carrying a sparkly sign that said, "Be kind. Stay safe."

Jenny has a side hustle as a Zumba instructor. It was only natural that her T. rex was soon dancing around the neighborhood with a speaker blasting upbeat songs such as Kool & the Gang's "Celebration" and the Isley Brothers' "Shout."

One of her first destinations was Birchwood Terrace Rehab and Healthcare, where she knew residents were isolated and stressed. "I just thought, If that was my grandmother, what would I do for her?" Jenny said. "We all needed a little bit of light and a little bit of happiness."

Over the last year, the T. rex and a menagerie of inflatable friends have shimmied through about 400 "Happy Hours" at eldercare facilities, COVID-19 testing sites and domestic violence shelters. Their spirit-lifting antics have landed them in local media, as well as on CNN and Fox News and even in an official Michael Franti & Spearhead music video for their song "How We Living."

But as Jenny danced her posse around Vermont spreading joy — occasionally selling some root beer along the way — she and her husband were barely getting by. Critical help came in January when PCC (Physician's Computer Company) of Winooski offered to sponsor Rookie's Happy Hour tour.

"This is one small way for us to vicariously boost the spirits at nursing homes and in the local community," PCC president and cofounder John Canning wrote in an email.

Jenny never expected anyone to pay her dinosaur to dance but is very thankful, she said, to "live in a place where locals support locals."

The original print version of this article was headlined "Dinosaur Dividends"