Roma's Butchery in Royalton Cuts Distance Between Farmers and Eaters 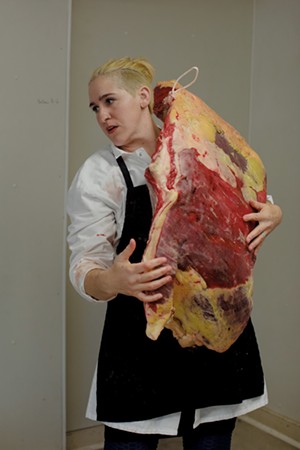 The menu at Roma's Butchery in Royalton is, unsurprisingly, on the meaty side. Since the 8-month-old butcher shop added lunch offerings in June, customers have been able to order juicy burgers made from beef ground daily; freshly made pork sausage with beet-carrot slaw on a house-baked potato bun; and housemade liverwurst sandwiched with blistered tomato jam, apple and cheddar between slices of house sourdough.

Roast beef sandwiches are made with meat roasted rare in the restaurant kitchen. Brisket is brined, then cooked low and slow to become pastrami. And garlic-and-cheese sausage encasing Scotch eggs is ground and seasoned in-house. Prices range from $10 for a pair of Scotch eggs to $16 for a hot pastrami sandwich with a side.

There is even a grilled cheese sandwich made with rich head cheese, the classic charcuterie crafted with meat gleaned from a pig's head, served with cheddar and tangy pickled red onions.

But what is most notable about Roma's Butchery is not highlighted on the menu board. Every meaty option is sourced from Vermont farms — most very close by — and butchered from whole or half animals in Roma's Break Room, a meat-cutting facility right under the retail shop. The same goes for the impressive array of cuts displayed in the butcher case, from thick country-style pork ribs to marbled T-bone steaks to delicate rack of goat.

The butchery's chef, Dave Webster, said that over his 15-year cooking career he has never had such constant access to meat so local and fresh. When he first decided that he wanted to try making pastrami, he asked butcher-owner Elizabeth Roma, "'Can I get a brisket?' She said, 'I'll have it for you in half an hour.'"

Roma's business is among a new crop of licensed, custom meat processors who are making more expertly cut, local meat available to satisfy Vermonters' demand. The appetite for local food, including meat, jumped during the initial months of the pandemic, and "it hasn't stopped," confirmed Julie Boisvert, meat program section chief at the Vermont Agency of Agriculture, Food and Markets.

Roma's Break Room is one of 14 new custom facilities that have opened in the last year and a half, bringing the total number to 38, according to Boisvert. Although custom licenses have limitations, they can help alleviate some processing bottlenecks. They allow butchering of animals slaughtered on farm for the personal use of farmers or for those who have bought animals under Vermont's on-farm slaughter regulation. This law permits farmers to sell a limited number of live animals direct to consumers.

"A lot of people are seeing the need for this kind of business," Boisvert said. 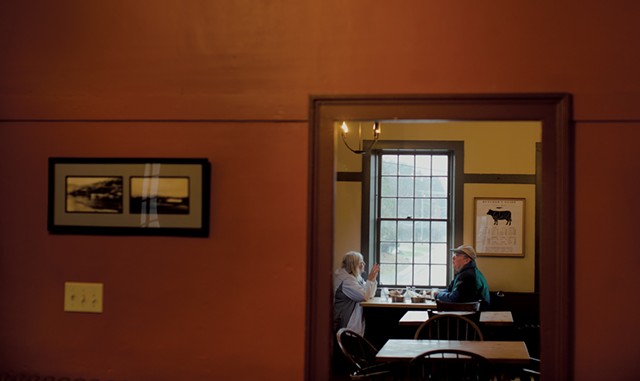 On a mid-October Friday morning in her retail shop, Roma, 38, pointed out a tray of fat-gilded pork chops from Longest Acres Farm in Chelsea. "I get so excited when the Ossabaw comes in," she said, referring to a celebrated breed of pig. "You see the muscle structure. It's got a deep pork flavor."

Wearing a cloth face mask printed with knife designs, Roma seemed to be everywhere at once as she hustled around the historic former tavern on Route 14 that houses her multifaceted business. Over a 90-minute period, she hefted pig halves out of a pickup truck, troubleshot a printer problem, used a band saw to break down a lamb and discussed slaughter dates with a farmer from whom she planned to buy a cow.

By the time Roma paused for a breath, she had missed the chance to meet an Australian couple who had heard about her shop in Los Angeles and dropped by during a road trip.

In the kitchen, Roma took a photo of a Caesar salad and a bowl of pork and beef chili. When she posted it on social media, she added the hashtag #knowyourfarmer.

"To me, that's important," Roma said.

The idea for Roma's Butchery gestated for six years. During that time, Roma also gestated three humans: She and her husband, Russell Lewczuk-Jensen, have a 4-year-old and 2-year-old twins, all daughters. "I only raise strong girls," Roma said with a laugh.

The first phase of Roma's business involved opening a state-inspected, custom meat-cutting facility in October 2020. In March 2021, Roma added the butcher shop, through which she can sell meat cut in her cellar cutting room from animals that are slaughtered under inspection at other facilities.

"I could buy [inspected] meat from anywhere — mostly already cut up — cut it [again] and resell it," Roma explained. "I choose Vermont raised, and I choose local farmers. I choose to buy whole animals and break it all down. This is not what most butcher shops do. It is very labor-intensive."

Roma had planned to open a shop in downtown South Royalton, but COVID-19 put that project on hold. The pandemic-related closure of the barely year-old Fox & Harrow restaurant in the Route 14 location opened another door.

Lucia Matule, co-owner of the building, raises sheep at her family's Balla Machree Farm in South Royalton and sells her lamb to Roma's Butchery. Matule connected with Roma several years ago, when the butcher was leading a volunteer holiday turkey-processing crew at a Barnard farm.

"She led us with her infant daughter in a backpack with snow flurrying around us. I was just like, Wow, this woman is incredible," Matule recalled. "We talked ... about her interest in owning a butcher shop, in creating opportunities for farmers to have their meat sold in their community."

In 2020, with the restaurant building vacant and local food interest "magnified during COVID, we revisited the conversation," Matule said. "Liz knew exactly what was needed, and she's doing it. She is the conduit that brings together the farmers and consumers."

The butchery business has been informed by Roma's background working in every step of meat production, from farming to slaughter to meat cutting to smoking. 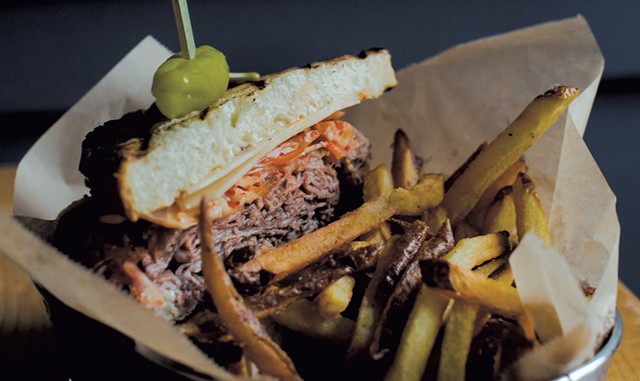 A few years after the Louisville, Ky., native graduated from Green Mountain College in 2007, Roma began farming pigs for a Pittsfield farm and became curious about how the animals were processed. She asked Royal Larocque, then-owner of Royal Butcher in Braintree, whether she could watch her pigs be killed and butchered. "Royal said, 'If you can handle this, you should come here and get a job,'" she recalled.

Starting in 2011, she worked on Royal Butcher's packing and labeling table for two years, during which time she took a month off to do an apprenticeship in Italy. "I got a glimpse of charcuterie and the way Italians do things," she said.

In 2014, Roma worked for a butcher shop in Maine, where she learned to break down whole animals into parts, as well as smoking and sausage-making techniques. That year, she and her husband bought a 140-acre South Royalton farm. While they established Putting Down Roots Farm, Roma worked at Royalton Farms and its associated slaughterhouse, Sharon Beef, where she learned how to kill and skin animals.

As livestock farmers, the couple are familiar with the challenges of Vermont's limited slaughter and meat-cutting infrastructure. From a consumer perspective, Roma observed that access to fresh, well-cut, local meat is inconsistent. Farmers market customers would often ask her whether Putting Down Roots' frozen pork would thaw in time to cook for supper.

With Roma's Butchery, she said, "I'm trying to make it more accessible for our community members to eat our local community's meat for dinner."

That includes reducing the logistics burden on busy farmers. Except for the chicken, which comes via a distributor from Misty Knoll Farms in New Haven, Roma buys all the meat she sells as whole animals directly from farmers and arranges for slaughter.

Her hands-on experience also informs constructive feedback that she gives farmers. "It helps me talk to the farmers," Roma said. "I know what they're trying to do."

When she does custom cutting of animals slaughtered on-farm for farmers or consumers who have purchased a live animal, she cannot sell that meat, but the jobs allow her to support nascent businesses, like that of Joseph Salls of Randolph Center.

After Salls drove his truck up to the butchery's cellar door on that mid-October morning, Roma headed out to check the pig carcasses wrapped in heavy-duty plastic.

"You got some nice back fat here," she said before hoisting an 80-pound half over her shoulder.

Salls, 25, grew up working on a Randolph dairy farm, left after high school to serve in the U.S. Marine Corps and returned home a year ago. He works in information technology, but his long-term goal is to build a diversified agricultural business producing pork, beef and vegetables. Salls has raised only five pigs so far, but he has already run into challenges finding a processor.

If not for Roma, "I would have had to spend a lot more time doing research and would have likely had to postpone butchering," he said.

Lily Stratton, 28, a butchery apprentice, sausage maker and baker, recorded the weights of the pork sides. Stratton joined Roma's team in May but has known Roma for a decade. "I love Liz, and I was ready to learn some new skills," Stratton said.

A newer addition to the team, Lisa McVay, 60, was also working that day. "I'm learning to be the chicken lady," she said. "Liz is so open and fun. She's a good teacher."

In a sector that is still largely dominated by men, it is unusual to find one woman in a butchering role, let alone Roma's cutting-room crew of five women.

"It just happened, not on purpose," Roma said, not wanting to make too much of it. "I had a young guy in here. He wasn't fast enough. I'm a mover. We've got stuff to do."

The original print version of this article was headlined "Meat Maven"