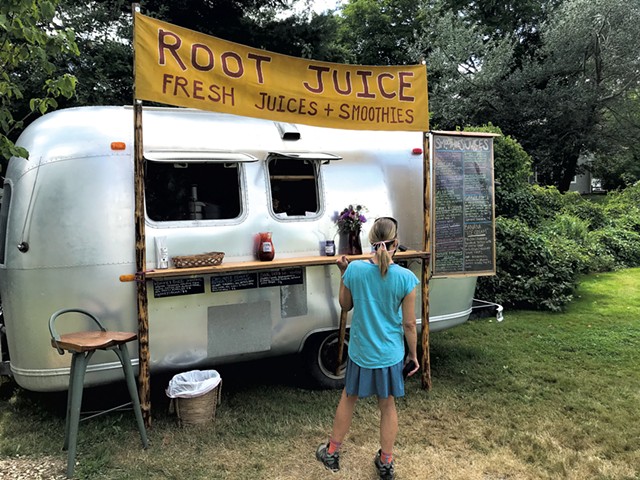 The good-looking intersection of East Warren and Roxbury Mountain roads in East Warren — a standout four corners in the Mad River Valley — just added a little more visual dazzle: a 1969 silver Airstream. The rig is the COVID-19-era home of Root Juice, a mobile smoothie and juice business owned and operated by Samantha Duchaine of Roxbury.

For five years, Duchaine, 34, traveled from her home base in Vermont with a mobile drinkery that she ran out of a cargo trailer and pop-up tent, from which she served drinks at music festivals around the Northeast. That business dried up when festivals were canceled.

So Duchaine and her boyfriend, Courtney Fair,renovated and refurbished an Airstream they'd found in the Adirondacks. She relaunched Root Juice this month at two locations in the Mad River Valley: a field at that four-corners intersection beside the East Warren Community Market; and next to the Sweet Spot in Waitsfield.

Duchaine makes drinks to order and serves them from a window of the Airstream. Her menu includes a blueberry-peach-lime-basil smoothie and a blend of carrots, bananas and peanut butter (all organic) with Vermont apple cider. The Ultra Classic contains carrots, beets, apples and ginger.

"I've always been passionate about health and wellness," Duchaine said. "I was always frustrated when I went to musical festivals and there wasn't good food. It felt like there needed to be an option for people to put something good in their body."

At midsize music festivals, such as the Green River Festival in Greenfield, Mass., and the Jerry Jam in Bath, N.H., her customers often included the performers. At one festival, the Wood Brothers came back three times for smoothies, preferring the almond-date-blueberry-cacao variety, Duchaine said.

"I couldn't be happier with it," she said of the new setup.

The original print version of this article was headlined "Smooth Operator"

The Magnificent 7: Must See, Must Do, August 4 to 10
Top Stories