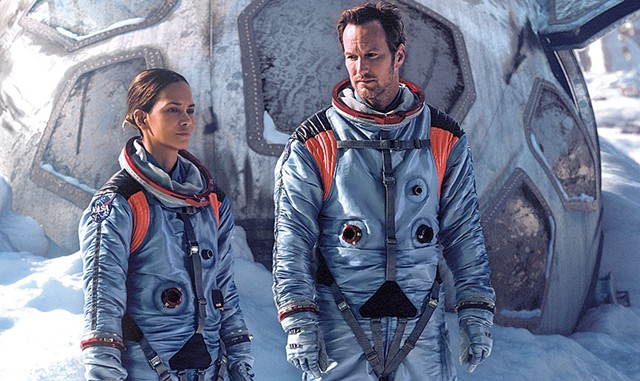 Sometimes you want to sit and solemnly contemplate a future full of natural disasters, and sometimes you just want to watch a terrible disaster movie. If you missed the latest offering from Roland Emmerich (2012) when it was in theaters in February, or skipped it because the teaser trailer seemed a little staid, I'm here to tell you not to be fooled by any superficial resemblance between Moonfall and sober, scientifically based movies featuring space shuttles and moon landings.

This is a movie in which the moon is careening toward the Earth and only Samwell Tarly from "Game of Thrones" (aka John Bradley) can save it, with assistance from a square-jawed Patrick Wilson and a mournful Halle Berry. Moonfall is now on HBO Max, and it's terrible in the best way.

On a routine mission in the space shuttle, astronauts Brian Harper (Wilson) and Jocinda Fowler (Berry) suffer a strange attack from the surface of the moon. When Harper tries to explain what attacked them — basically, a special effect that looks like a cross between the sandworms in Dune and the smoke monster on "Lost" — he's laughed out of NASA.

Ten years later, the moon lurches out of its normal orbit and starts creeping toward Earth. Somehow, the first person to notice this is conspiracy theorist K.C. Houseman (Bradley), who has no formal scientific credentials, only a burning desire to prove that the moon is actually a "megastructure" built by an alien intelligence.

Now head of NASA, Fowler sends astronauts to see what's up. But the sand/smoke monster makes short work of them, revealing itself to be a "self-aware, self-replicating singularity." In other words, it's an AI — a futuristic cousin of your Alexa — and it seems determined to wipe out the human race.

As the moon continues its approach, tidal floods, earthquakes and debris wreak havoc on Earth. Forced to team up with Houseman, the astronauts must put Earth's rebellious satellite back in its place.

We've subjected the moon to so many indignities over the course of human history — planting flags on it, invoking it in nursery rhymes and lewd metaphors, alleging that it's made of green cheese. Perhaps it's time for a little payback. A rogue moon, looming on the horizon like the Death Star and sucking oxygen from our atmosphere, is the stuff of nightmares. In Moonfall, however, the scenario feels more like a campfire tall tale that just keeps getting taller.

The best disaster movies — or the most prestigious ones, anyway — are procedurals with giant, international casts. In between the scenes of death and destruction, they explore how the world's governments might actually respond to a giant asteroid (Deep Impact) or an alien invasion (Emmerich's own Independence Day).

In Moonfall, Emmerich dispenses with most of that. The U.S. president is mentioned but never shown. The movie doesn't explain why NASA took so long to respond to a threat that it supposedly discovered during the first moon landing. Instead, out comes Donald Sutherland to deliver a mumbled monologue about secrets and cover-ups, as if he were the ghost of paranoid thrillers past.

The script adopts a freewheeling, antiestablishment attitude: Experts are incompetent, conspiracy theorists are right, and it makes perfect sense for the vital mission to save the Earth to have a crew of three, one of whom is a comic-relief character with a fake PhD and a cat named Fuzz Aldrin. Our protagonists ride to the moon in the space shuttle Endeavour, liberated from a museum and emblazoned with outraged civilian graffiti: "Fuck the moon."

Things just get sillier from there, as new age beliefs join forces with conspiracy theories to propel Moonfall into the realm of science fantasy. Soon, Emmerich is riffing on Contact and 2001: A Space Odyssey. But, by interspersing these space oddities with boilerplate scenes of our heroes' loved ones escaping the carnage, he displays his devotion to the core faith of all disaster movies: Family is everything.

It's no surprise that Moonfall was a bomb. During a pandemic that exposes the weakness of institutions and public trust, who wants to risk their health to see a movie in which world governments can't even come up with a half-assed plan to save the Earth? From the safety of a couch, though, this moon fail becomes a guilty pleasure. If you're willing to suspend your disbelief to the height of the Chrysler Building (which meets a sad fate here), you could have a lot of fun.

The Wandering Earth (2019; Netflix): Moonfall was made with ample financing from multinational Huayi Brothers Media, underlining the importance of the Chinese market for today's film spectacles. But China makes its own disaster movies, too. In this mammoth international hit, a ragtag group of heroes must save Earth from a collision with Jupiter.

Don't Look Up (2021; Netflix): In Adam McKay's satire, a rude and crude U.S. president does her best to ignore the looming threat of an asteroid headed toward Earth. The irony is that the government depicted in Moonfall is possibly even less effective.

The Core (2003; HBO Max, rentable): Emmerich has helmed many ludicrous disaster films. But to find another one quite as fanciful as Moonfall, you might have to go back to this offering from Jon Amiel, in which the Earth's core stops rotating.

The original print version of this article was headlined "Moonfall 2"