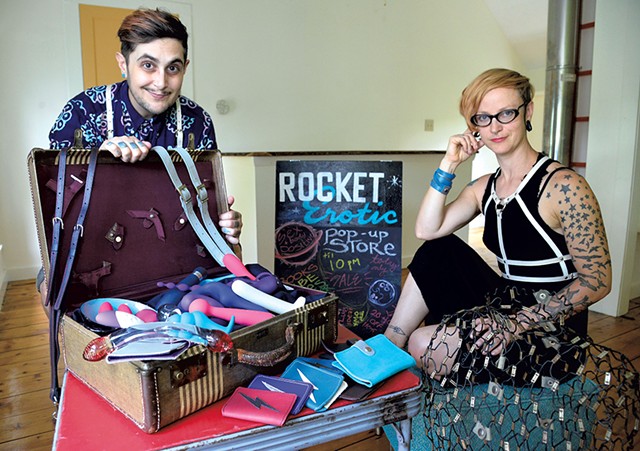 Jan Lloyd, 41, who now runs the biz with her partner, Kelly Arbor, 39, founded Rocket in June 2014 because she saw an unfilled need.

"It came from the lack of a sex-positive place to buy toys and gear in Vermont," Lloyd explains. Spots with a "combination of bongs and pipes and sex toys didn't appeal to me ... and [sold] a lot of crappy toys with bad ingredients mixed in."

Plus, such shops don't do much, if anything, in the way of education.

So Lloyd dreamed up her ideal sex shop: one that would offer a curated selection of high-quality products without an exorbitant markup. One where frank conversations about gender, sexual health and kink were primary. And one where "all people, all bodies, all genders, all identities, all budgets" would feel welcome and respected, she says.

On pop-up nights, Lloyd and Arbor arrive on location in their bright-yellow Toyota and unload boxes stuffed with such items as butt plugs, restraints and lube. Once inside, they drape surfaces with cloth and artistically arrange the merchandise. And then the customers arrive.

Some stroll right in and confidently start handling the goods. "The toys love to be touched," says Arbor. "They're waiting on their little sateen beds to be turned on."

Others look around shyly, not knowing where to start. Lloyd and Arbor are sensitive to the fact that most Americans are uncomfortable talking about sex — especially in public or around strangers. So they strive to create a welcoming environment in which people are invited to be open about their wants and needs.

Lloyd and Arbor actually met in that kind of space. In January 2014, Lloyd was vending at the University of Vermont's Translating Identity Conference when she bumped into Arbor, a former educator for famed sex-toy shop Babeland. As Arbor describes it, both had the same reaction upon meeting: "I love you ... You've been doing what I want to do!"

"We'd been doing such complementary things," recalls Arbor, who is genderqueer. "Besides our love affair, there was the merging of what we were both doing really well. We meet in this place of crafting and edutainment. We both use humor a lot," Arbor adds, "but we also like functional information."

In order to make sex ed accessible, the pair creates theater pieces that are silly, fun and informative. For one, they crafted a huge vulva puppet. For another, they found a way to offer a more inclusive, sex-positive take on The Rocky Horror Picture Show. How? By pausing the action and using a shadow cast to offer new interpretations of scenes in which things go down in a less-than-consensual way. (Dr. Frank-N-Furter, for all of his campy glory, is not a role model for good sexual behavior.)

Both Lloyd and Arbor believe that warmth and humor help people converse about things that are often taboo.

"A lot of people are having pleasure parties to celebrate their [nuptials]," notes Lloyd. But some of the companies offering that service, Arbor adds, are run as pyramid schemes and provide low-quality toys.

"What we do differs dramatically from the traditional model," Lloyd continues. "It's more directed at the group involved and what they're interested in. We bring games and a handpicked selection of toys. It's still fun, but it focuses more on learning."

Aspects of Rocket Erotic's work are serious, dealing with issues such as pregnancy, sexual safety and consent. And some pieces are sheer fun. Take fashion, which is important to both Lloyd and Arbor and provides an outlet for their craftiness and creativity. "We make all kinds of leather gear, from bracelets to functional cuffs, suspenders [and] body harnesses that can be worn over clothes or without clothes," Lloyd explains. Adds Arbor: "We've started calling it 'flashion.' It's a combination of flair, fashion and function."

Rocket Erotic's newest line is handmade undergarments crafted with fabrics from Montpelier's Salaam. "They're fun, they're funky, they're super comfortable, they're not frilly at all," says Lloyd. "They fit in between the lines of feminine and masculine, and they're for all bodies."

Lloyd and Arbor strive to keep pricing affordable for all their products. "We both come from poor origins," Arbor says. "It's obscene what gets charged out in the world for gear."

Having a dedicated space of their own would eliminate schlepping goods from one location to the next. But "the [pop-up] model allows for more access," Lloyd explains. She and Arbor can show up at a tiny venue in a rural town or travel across New England and stop at universities along the way. Both partners say their biggest payoff is in helping others — especially those who've had less access to sex education and sex positivity.

"I like to see their eyes get wide," Arbor admits, "like seeing these older hetero men get excited about strap-ons."

Lloyd appreciates the moments when people open up about something that is difficult for them. "[There are times] when people say something that's hard for them — 'I want to try this new thing' or 'I've never had an orgasm.' You can see [it] in their faces ... and you can offer them something.

"All bodies are different, and everybody needs something different to feel pleasure," she continues. "There's so much shame, and it's embedded in the language. There's no shame at Rocket."