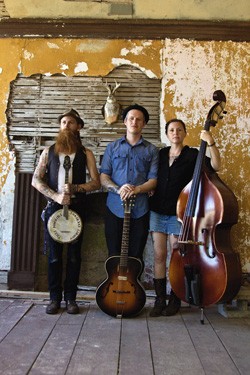 The big news on the local music front this week — which, for once, has nothing to do with nightclubs closing under weird-ass circumstances — is the return of the Lake Champlain Maritime Festival, which gets under way this Thursday, August 9, and runs through Sunday, August 12, at locations around the Burlington waterfront.

There are all kinds of happenings associated with the LCMF, from boat shows and an air show to a pirate-themed 5K run. But I’m told this is a music column, so we should probably focus on that stuff. Though I be sorely tempted to write this entire column in pirate-speak, so I be. Yar.

While big names are impressive, the undercards feature some intriguing acts well worth showing up early for. To wit:

Opening for Gogol Bordello are the Devil Makes Three, an absolutely raucous punk-tinged Americana band that actually has local roots — at least two members are native Vermonters. They put on a hellacious live show, pardon the pun.

(As an aside, if I could chat with Gogol front man Eugene Hutz for a sec. Eugene, remember back when you were jung and crazee in BTV and there were always rumors about how your band, the Fags, was going to play a show with the Queers, usually at Club Toast or 242 Main, but then it never happened? Well, it turns out the Queers are playing Club Metronome on Tuesday, August 14, with surf-punk godfathers Agent Orange, Rough Francis, the Flat Tires and Murder Weapon. Just sayin’…)

Moving on, I’ve already openly professed my love for the Lumineers in this column. If you’re going to Old Crow, make sure you’re there in time to catch them. You’re welcome. But you’ll also want to see the Milk Carton Kids. Their last record, Prologue, has been a personal favorite for about a year now and is a stunning example of how much emotive power can be divined from a mere two guitars and two voices.

(Aside No. 2. To the woman who I-Spied me at the Lumineers’ Higher Ground Showcase Lounge show in April: Sorry I didn’t respond. But I really was flattered. Pretty awesome show though, right?)

Then there’s Dirty Dozen Brass Band, opening for Citizen Cope. Given how much people seemed to dig all the great N’awlins sounds from this year’s Jazz Fest, the chance to see one of the Crescent City’s legendary brass bands is too good to pass up.

And finally, I’d be remiss not to mention all of the free, and mostly local, music happening around the waterfront all weekend long, including the Lynguistic Civilians, Zack duPont Band, STRONG>Justin Levinson and the Valcours, the Amida Bourbon Project, Lendway, Joshua Panda and the Hot Damned and many, many more. For the full schedule, visit lcmfestival.com.

Speaking of the LCMF, local rock-stars-in-training Chamberlin will host an after-party at Signal Kitchen following Old Crow Medicine Show’s Waterfront Park set on Friday, August 10. And as anyone who has seen those “Most Interesting Man in the World” Dos Equis commercials knows, the after-party is the party you want to attend — though the before party should be pretty OK, too. Chamberlin have a new EP, Look What I’ve Become, set to drop on Tuesday, September 4. This comes on the heels of a period during which the band essentially split up, with songwriters Mark Daly and Ethan West parting ways with the band’s other three original members. It was not a pleasant breakup. The duo recorded the EP with session players in Nashville, but, as they dug in, they realized that the themes of jealousy and betrayal that characterize the new songs cut awfully close to the bone. They came home to VT, intent on mending fences, which it seems they did. The original lineup is back together and reportedly working on a full-length, set for release in 2013.

On a down note, local rockers theProper are calling it quits and will play their final show this Saturday, August 11, at the Monkey House with Vetica, We Are Fauna and Majuscules. TheProper’s debut album, tulip/tsunami, was among the more enjoyable local records I’ve heard this year, lean pop-rock with few frills and even fewer pretenses. I’m kinda bummed that’s all we’ll get from them. So I’m glad the band was kind enough to leave us with a parting gift, a new single called “#1 Loser,” recorded at KTR Recording in Burlington. Though I have to say, as a genuine redhead, I’m not a fan of the tune’s opening line, “She says she doesn’t like ginger kids.” WTF? Anyway, you can check out a video for the song on YouTube. Or go catch ’em live at the Monkey.

We haven’t heard from local trash-pop auteur Joey Pizza Slice in a while. It seems he’s been a touch busy recording absurd amounts of new material, including a new tape, Deli Days, out now on Night-People Records — also home to Brattleboro’s Blanche Blanche Blanche, BTW. Actually, BBB’s Zach Phillips is in the process of digitizing a bunch of his personal favorite Pizza slices for a compilation to be released on his own label, OSR. But wait, there’s more. Goaty Tapes is also putting out a new JPS tape, and Feeding Tube Records has a new JPS 12-inch vinyl in the works. And no, I’m not making up any of those label names. Anyway, dude has clearly had a full plate lately. But this Sunday, August 12 — which happens to be his birthday — Joey Pizza Slice will find time to play a BTV show at Club Metronome, alongside Shy Hunters and Other Cities.

In chatting with Cumbancha honcho Jacob Edgar recently, I learned that he’d discovered the quiet brilliance that is Francesca Blanchard, who now goes to school in Boston but grew up in Charlotte, where Cumbancha is based. Edgar is taking Blanchard under his wing and hopes to expose the songwriter’s music to wider audiences. What’s more, he said he’s got his eye on a few more worldly local acts, to boot — Blanchard was born in France and often sings en français. Given that Edgar typically travels the globe in search of cutting-edge world music, casting his gaze in his own backyard will certainly save on travel expenses. I became enamored with Blanchard’s music last year, when I reviewed her roundly excellent debut, Songs on an Ovation. It turns out I wasn’t alone. I’m guessing you’ll feel similarly should you catch her show at the Bee’s Knees in Morrisville this Thursday, August 9, or the barn show at her Charlotte home on Saturday, August 11.

Note to Edgar: I might also suggest keeping an eye on local songbird Miriam Bernardo, who is eternally among my favorite local vocalists. She’ll be appearing alongside Michael Chorney and Dollar General at the Old Meeting House in East Montpelier this Saturday, August 11, playing a tribute to the late songwriter Lhasa de Sela, who died of breast cancer in 2010. Proceeds from the show will benefit the Patient Fund at the Cancer Center of Central Vermont Medical Center. In a related story, go fuck yourself, cancer.

The high-minded cats from agri-socio crusaders the Root Center are joining forces with the Jenke Arts Crew to present a sizable local showcase/benefit, Seedz of Change, at the Monkey House this Thursday, August 9. Among the roughly 20 acts slated to appear are Nuda Veritas, Austin Sirch, Tommy Alexander with Set Up City and Greta Frost. All proceeds will go toward completing TRC’s ongoing dome project, which is part of a larger effort to grow food for the Chittenden Emergency Food Shelf.

Last but not least, this just in from the Department of Corrections: Last week’s column stated that Black Crowes cofounder Chris Robinson would be appearing at next month’s Grand Point North Festival at Burlington’s Waterfront Park. It seems we got our Robinsons mixed up. It’s actually Chris’ younger brother, Rich Robinson, who will rock the GPN-curated fest. Apologies for the slip.