Rock Star: The Sky's the Limit for This Teen Climber 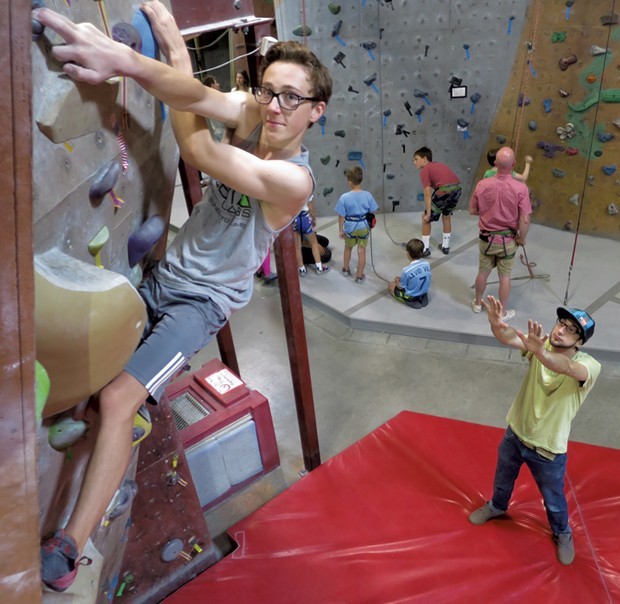 Ben Blackmore keeps scaling new heights. Literally. The day before Kids VT caught up with the 16-year-old Charlotte rock climber, he'd successfully bouldered Touching the Sky, one of the most difficult climbs at Smugglers' Notch.

In contrast to sport climbing, which requires harnesses and clipping to bolts along the route, bouldering involves short climbs without a harness. Ben does both. In the U.S., the difficulty of bouldering climbs, called problems, is rated with the V Scale, which ranges from V0, the easiest, to V16. Touching the Sky is a V12.

Although exact ranks fluctuate day-to-day, Ben falls among the top 10 junior climbers, and the top 100 adults in the country. He's received endorsements from chalk-bag maker BetaLabs, and climbing-shoe manufacturer Evolv.

A member of the Youth Pro Team at Petra Cliffs in Burlington, he has competed in four national competitions. Just getting there requires qualifying at local, regional and divisional levels. Before Ben came along, it had been nearly 15 years since Petra Cliffs sent a climber to nationals. In July, Ben narrowly missed the final round in the sport climbing nationals.

"He's definitely a well-rounded climber," said Sam Edson, Ben's coach for three years. He stays cool and confident in competition and inspires the other kids on his team. "He's the best climber in the entire gym, really," Edson said.

Ben started climbing when his mom enrolled him and his sister in Petra Cliffs' summer camp. Petra Cliffs co-owner Andrea Charest suggested the siblings might like to participate on the gym's rock climbing team. They joined when Ben was around 10. His sister eventually left to focus on horseback riding, but Ben took to it, said his mom, Jeanne Blackmore. "I mean, just really voraciously took to it, and he's been doing it ever since."

The Champlain Valley Union High School junior has climbed in France, Greece, the Virgin Islands, Tennessee, Montana, California and "every nook and cranny of New England," and he has befriended climbers of all ages, his mom said. He quit skiing, track and cross-country to focus on climbing, but continues to run to build endurance and keep his weight down.

At 5-feet, 8-inches and 125 pounds, one wouldn't guess that he is, as his mom says, "absurdly strong." Except for occasional chocolate croissants, he won't touch junk food, mindful of maintaining a good strength-to-weight ratio. With his side-parted, wavy, auburn hair and his tortoise shell glasses, he looks bookish, more Clark Kent than Superman.

Until he grabs hold of a rock. He seems to stick to it, even when his face is horizontal to the rock and his back is to the ground. He reaches, scrambles and, when vertical, hops both hands swiftly up its surface. His legs may stretch for a toe hold, fold under him like a frog or swing like a pendulum as he hangs, momentarily, from his fingertips.

Not a climber herself — "In fact, I'm scared of heights," Ben's mom said — she describes climbing as being cerebral. "You have to think of a problem that seems very unsolvable and find a way to solve it."

When he's climbing, Ben said, the rest of the world melts away. His mind quiets as he focuses on holds and piecing movements together. Finishing a climb that's at or above his level and standing on top of it, "that's like the best feeling ever," Ben said.

And he does so with little fanfare. "One awesome thing about Ben is he doesn't really have much of an ego around climbing," Charest said, unlike climbers she's dubbed "the bros." They're the guys who go shirtless and yell Yeah! when they finish a climb. "Ben could outclimb any of these people, but he's very unassuming," she said, "kind of an undercover crusher."