Maker Alm@ Pérez's small robotic creations are neither emotionless RoboCops nor indomitable Terminator-like cyborgs. When confronted with the physical presence of a human, they stop suddenly and retreat, as if in fear, and then recite poetry in English and Spanish about their angst. The insect-like creatures, whose limbs are made of birch plywood but whose abdomens are metal, wires and circuitry, scurry awkwardly, their "feet" scratching noisily on the floor. The overall effect can feel rather creepy.

"That's the whole idea," said the artist with a smile. "The robots being clumsy is part of what I wanted to accomplish. They aren't perfect. And that emphasizes the anxiety and the separation between human, technology and [other] species."

"Robopoems: Quadruped@s" is a multimedia project created by Pérez, a pseudonym for Tina Escaja, now on display at the BCA Center in Burlington. The installation explores the intersection of robotics and humanity using poetry, photography, sound and augmented reality. Six shoebox-size machines — plus a quadruped the size of a dorm fridge built with the help of Champlain College students — have poetry verses, ostensibly written from the robots' perspective, etched into their limbs.

Their alien nature, Escaja explained, is meant to convey the underlying anxiety many of us experience when interacting with technology. Technology in turn often mimics living creatures while requiring us to become more machine-like in our behavior.

Escaja began working on "Robopoems: Quadruped@s" in 2015 when she was chosen to be a maker-in-residence at Generator, Burlington's communal maker space for artists, engineers and entrepreneurs. As she had no prior training in robotics, Escaja found open-source software and electronics to bring her creatures to life. The 53-year-old digital artist, poet, activist and feminist scholar is professor of Spanish at the University of Vermont, where she also serves as director of the Gender, Sexuality and Women's Studies program.

Escaja's decision to use an artistic pseudonym wasn't done to conceal her real identity, which is revealed in the exhibit's brochure. Rather, it's another way to emphasize the project's existential themes of identity and authenticity, she said.

As Escaja explained, "alma" means "soul" in Spanish. The name Alm@ Pérez was inspired by the novella Niebla ("Mist") by Spanish philosopher, poet and playwright Miguel de Unamuno. When the book's main character, Augusto Pérez, discovers that he's a fictional character, he confronts his creator — that is, the author — and has a conversation with him about what it means to be real. In the process, Escaja explained, the author becomes fictionalized and the fictional character more "real."

Indeed, the last line of Escaja's poem in seven parts, "A tu semejanza / mi Imagen," ("According to your likeness / my image") is a twist on a biblical verse from the book of Genesis: "So God created mankind in his own image."

And, as Escaja's Spanish-to-English poetry translator, Kristin Dykstra, explains in the brochure, use of the @ symbol in the pseudonym and title addresses the "grammatical gendering built into the Spanish language ... [and] loosens assumptions about gender identities." In short, Escaja's robots reject binary identities, even as their own binary computer code makes them "alive."

Though some artists might have been disappointed to have their work displayed in the windowless basement of the BCA Center, Escaja was thrilled to be in the industrial-like space, with its exposed brick, vents and overhead pipes. 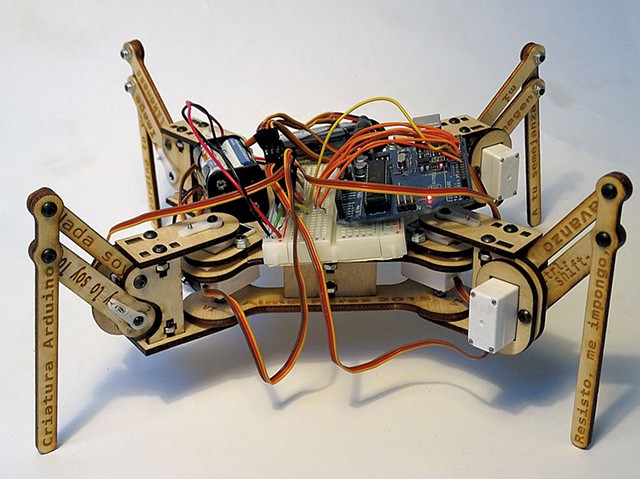 Accompanying each robot is a large color photo that provides the viewer with additional layers of interactivity via augmented reality. Scan different parts of the photo with a gallery-provided tablet — or use the HP Reveal app downloaded to a smartphone — to see interactive features such 3D graphics, video of the robots crawling and narration in computerized diction, which is reminiscent of physicist Stephen Hawking's voice.

Escaja, who declared herself "fascinated" by technology, admitted that what she chose to use is less than perfect. She called augmented reality "a failed technology" that never caught on among computer users. Escaja has done other multimedia projects using outdated technologies, as well, including many created using Adobe Flash Player. In 2017, Adobe announced that it would stop supporting the browser plug-in by the end of 2020, which will make much of her work inaccessible.

"I don't know what's going to happen with augmented reality," Escaja said. "But right now it's kind of fun."