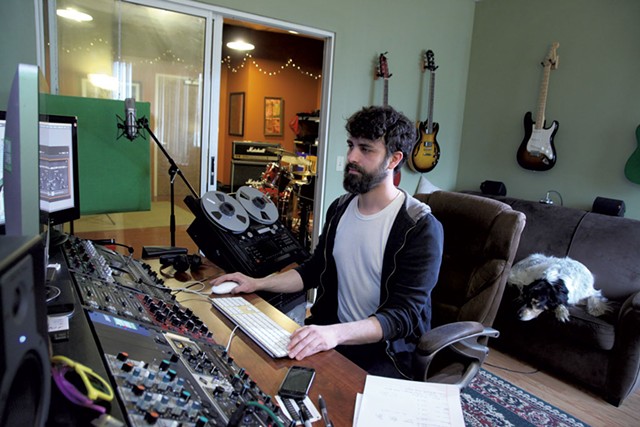 Cutting a record can be a stressful process, especially in a professional recording studio. Most bands in the Burlington area work on shoestring budgets, and the ticking clock of a studio's hourly rate can be menacing. But one local joint has a leg up on calming and soothing its clients — four legs, actually.

Williston's Robot Dog Studio is named after proprietor Ryan Cohen's English setter-collie mix. The luxuriously coated canine is the studio's mascot and de facto therapy dog. To stroke your fingers through Robot's silky tresses is pure bliss. It's hard to imagine feeling stressed with such a friendly pooch at your feet.

They say pets take after their owners, and the adage certainly applies to Robot. Cohen, 35, is calm, collected and the essence of chill. But despite his laid-back demeanor, the engineer is one of the most prolific and hardworking in the area. He estimates that he's recorded nearly 60 bands in the last several years and, in 2017 alone, nearly 300 tracks. About three-quarters of those have been completely finalized, a feat he facetiously credits to "having no life and being a workaholic."

After years of amassing a client base by offering his services for well below industry rate, Cohen has established his studio as a top-tier choice for locals looking to make an album.

"I've never been a huge musician, or particularly talented," he tells Seven Days from behind his mixing console. He's half joking, given his proficiency on multiple instruments. Cohen currently plays bass in the Burlington alt-rock band Phantom Suns.

"At one point, I may have wanted to be a rock star," he admits. "But I realized I'm way better at helping other people get there."

The bearded, curly-haired man was born and raised across Lake Champlain in Moriah, N.Y. A student of graphic design, Cohen originally moved to the Queen City to pursue design and marketing. Eventually, his passion for recording overtook his other interests.

Cohen started his career with DIY recording setups in basements around town. One of his earliest projects was Burlington indie-rock band Villanelles' 2010 self-titled debut.

Cohen transitioned into his life as a full-time engineer and producer in 2014, setting up shop in a nondescript office park. After some slight renovations, the previously cramped cluster of rooms became two larger ones connected by a sliding glass door. Vivid wall paint and a disco ball give it a fun and inviting atmosphere.

"My skills and my repertoire improved by leaps and bounds in the first month of [recording] full time," he says. "I learned and progressed probably as much as the 10 [previous] years."

The venture was a huge financial risk for Cohen. Early on, his margins were razor thin.

"I knew [the math] didn't quite add up at first, but I really wanted to do it," he says.

Robot Dog has worked with clients from just about every genre. But rock music is its bread and butter, especially hard-edged varietals like metal and hardcore.

Matt Hall, who plays in a number of punk-ish outfits in Plattsburgh, N.Y., including Bren and Marco Polio, worked with Cohen on six different projects in the last two years.

"He's a very empathetic listener," Hall writes in an email. "He's able to recognize what works and what doesn't in a certain style, genre or sound."

Hall also notes Cohen's efficiency and speed: "You can walk into Robot Dog and get right to work."

Cohen is usually able to track an album in a couple of days — sometimes fewer.

"Obviously, it's a different kind of result than if you're going to break down every song and spend a couple of days on [each]," he says. But his expertise in live recording is often what attracts bands to Robot Dog in the first place.

Cohen says that some of his clients view him as producer, while others see him as engineer.

"I really don't try to inflict my tastes on people," he says. "I'm a more engineering-type producer. In a lot of cases I'm doing the same thing, no matter what my title is in the project."

"I've worked with engineers who have a sort of audible signature on their recordings that don't always benefit [the record]," writes Hall. "Ryan is able to constantly adapt and stay transparent."

Speaking of transparency, Cohen regularly invites the world into his studio via session videos. Using a knockoff GoPro camera fit with a fish-eye lens, he captures what a session at Robot Dog looks and sounds like in brief web videos, many of which are posted on Robot Dog's Facebook page.

"It was becoming pretty obvious that people [didn't] want to listen to audio by itself," he says. "But people would literally watch anything for at least a second."

Most recently, he brought in nine-piece cumbia band Mal Maiz, by far the biggest group he's ever tried to squeeze into his relatively small space. The session was part of an ongoing series for Burlington music superfan Tim Lewis' radio program, "Sounds of Burlington," on WBKM 107.1 FM. Throughout the recording process, Cohen was attentive, gracious and hospitable, offering up a selection of brews from Burlington Beer, his neighbors in the building.

Cohen's rates are listed on his website, and he encourages clients to think carefully about how they want to spend their money. Most of the time, he says, people want to walk away with a full-length album. But, given consumers' short attention spans, Cohen has been pushing his clients toward scaling down and thinking twice about spreading resources too thinly across their project.

"I'm trying to encourage people to make less songs and spend more time on them," he says. "It's a hard conversation to have. [People] don't think an EP or a single is a real thing, or enough.

"But there's so much stuff out there," Cohen continues. "You're lucky if you get someone to listen to one of your songs."

Though he's the sole proprietor, Cohen frequently uses the word "we" when talking about the goings-on at the studio — and he's not just referring to himself and Robot.

"I think everything here is a team effort," he says, noting that "we" means himself and the bands with whom he works. "I get invested in the projects, and I hopefully get the bands invested in the recording process."

Robot seems invested, too. You'd think that thrashing guitars and thunderous drums would send a pup fleeing, but not him.

"Nothing freaks him out," Cohen says with a smile.

A selection of Cohen's production discography is available at robotdogstudio.bandcamp.com.

The original print version of this article was headlined "Go, Dog, Go"