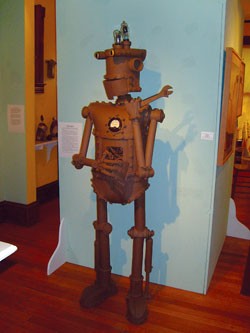 Characteristically, the newest works by Essex Junction artist John Brickels are playful and innovative. His “Bolts and Bots” exhibition of clay sculptures at Montpelier’s Lazy Pear Gallery is a complete departure from his signature dilapidated buildings constructed from extruded stoneware. Here Brickels’ masterpieces incorporate found metal components, electrical tidbits and glass eyes into hundreds of pounds of malleable mud. He has expertly crafted humble clay into robots, vehicles and surreal mechanical objects. The pieces are mystifyingly detailed and flawlessly built by hand.

Brickels keeps his fired stoneware naturally colored, like raw, unfired clay, as if to emphasize his illusionistic forms without the distractions of glaze or paint. He does, however, effectively juxtapose the textures of materials, especially clay with weathered old toys and rusted patinas. “Falcon” is a 19-by-17-by-8-inch wall piece consisting of the front end of a rusted pedal car replete with clay belts, springs, fan, alternator and wheel. Everything is in scale with the pedal car grill. It’s like a junkyard vehicle being scrounged for parts. “Knobby” has the same theme and scale, with a pair of wheels prominent in its undercarriage.

The wall piece “Wired” is a 22-by-30-by-6-inch, fanciful object referencing basement utilities. Red, yellow and gray valves are attached to a curved stoneware pipe; added to it is a sort of electrical box with three short wires and a partially open cover. The latter is held on with only one Phillips screw — that is, a perfect facsimile made of clay. “Pipe Dream” is a tangle of seven large-diameter pipes with shiny new metal valves affixed to the clay.

Brickels’ new robot series blends anthropomorphic forms with sculpted technological details. His creations are like L. Frank Baum’s Tin Woodsman, or Tik-Tok of Oz. “Alphabot” is a 19-by-15-by-7-inch wall piece with a smile and green glass eyes. It’s otherwise all clay, though it appears to be held together by rivets and bolts. “Steam Bot” is a 23-inch-tall cylindrical wall piece with large brown eyes. A copper valve and rings of would-be rivets appear in the section of pipe. The glass eyes Brickels uses are from a taxidermy supply shop; they include large alligator eyes as well as those of lions and other cats. Just like the tiny white dot a portrait painter adds to a subject’s pupils, Brickels’ faux animal eyes suggest life.

The two main robots in Brickels’ exhibition are human-sized. “Box Bot” is the less fortunate of the pair. The 42-by-48-by-35-inch “clinking, clanking, clattering collection of caliginous junk” — as the Wizard of Oz once called the Tin Woodsman — is heaped into a wooden crate with a perplexed look on its mechanized face. The robot is sadly disarticulated with pneumatic hoses, gears, rods, bolts and other ceramic details tossed into the crate. It probably wasn’t a clay robot that collapsed; Brickels wouldn’t have made such a mistake. He no doubt designed this one with signature wry humor.

The 6-foot-tall standing “Milliamp” steals the show, and confirms that Brickels is a consummate clay robotics engineer. “Milliamp” looks like a boiler on spindly legs with shock-absorber calves. In addition to the usual amazing details — the robot even holds a wrench with a brand name stamped on it — Brickels installed an inner power source so that the needle of an amp meter inserted into “Milliamp’s” chest pulses with a heart beat. Two vacuum tubes on the robot’s head flash with iridescent colors, as if the friendly bot is having a brilliant idea.

Ceramic technology dates back to the Neolithic epoch, when humans simultaneously began to fashion both utilitarian pottery and fetishistic figurines. Brickels’ sculptural use of ceramics to mimic fanciful modern technologies is a whole new take on the ancient medium.