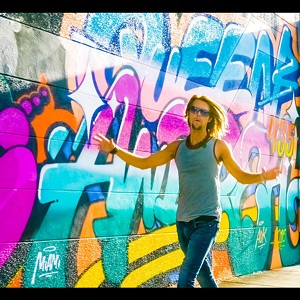 Robin Sunquiet just wants to dance. Not only that, he really, really wants you to join him. The Burlington-born singer-songwriter was the leader of the now-defunct Queen City band the Move it Move it. Now that he's flying solo, he's less focused on the pan-global sounds of his former project and solidly fixes his gaze on an ever-revolving mirror ball.

The opening track, "Endless Weekend," is a radiant banger that distills Sunquiet's euphoric vision of party perfection: sun, sand, moonlit waterfalls, a gyrating dance-off and plenty of friends with whom to enjoy it. He skyrockets into his upper register as he hits the chorus.

"Got Your Back" dips into a languid, rocksteady beat. Jagged organs pop on the offbeat while Sunquiet whisper-sings the titular hook into echoey oblivion. A lone synth overlays a counter-melody that's actually more memorable than the chorus itself.

"Pure Energy" is a down-the-line, 120 BPM toe-tapper suited for the waiting room at Crunch Fitness. He sings the hook (which, again, is titular) with velveteen three-part harmony.

Sunquiet is damn good at writing a catchy tune. He's clearly fluent in classic pop anatomy and scores an A-plus for constructing memorable hooks. He also displays versatility on guitar, bass and keyboards. Alas, he seems less comfortable behind the mixing console.

The record is entirely self-recorded and self-produced, which may be the source of some of its shortcomings. Vocals are thin and compressed throughout, the horn section sounds like it came from a tin can, and everything is mixed way too low. If you're planning to throw any of these songs on a party playlist alongside professionally produced tracks, you'll find yourself frequently adjusting the volume.

Sonic deficiencies don't entirely derail the experience, though. Despite its paper-thin production, "Something Beautiful" is perhaps the album's most interesting composition. Disjointed jazz chords and gossamer guitar picking fit nicely with the club aesthetic, and Sunquiet delivers some of his best singing.

Elastic Love presents its maker as a sundrenched party animal. If Sunquiet intends only to make his listeners shake it, he quite possibly succeeds. But if his mission is to make high-quality dance music, he needs a skilled producer to guide his vision into a more professional-sounding space.

Elastic Love by Robin Sunquiet is available on iTunes.