Robin Gottfried, 'Our Trip Up in Time' 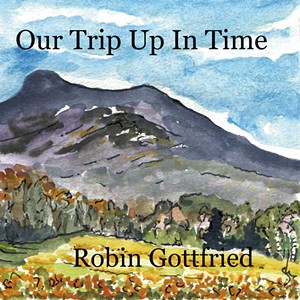 There is truly a fine line between subtle nostalgia and a big ol' plate of cheese. One lyric about a woman being like "a fine wine," or a gooey chunk of saxophone needlessly inserted, and a promising genre experiment can become a parody of itself. Burlington singer-songwriter Robin Gottfried walks this fine line like a tightrope. His latest album, Our Trip Up in Time, comes decked out in all the regalia of late '70s/early '80s yacht rock. It will have you reaching for a Christopher Cross album and pouring yourself a piña colada.

The good news is that, by and large, Gottfried's skill and earnestness keeps his balancing act firmly on the promising side. With only a few exceptions — "Next to Nothing" tries to weaponize soft boy saxophone and, lordy, it's too much — the native New York City musician steers his good ship where it needs to go.

On sunny tracks such as "All I Need to Make It Through," Gottfried rides an electric piano groove to sing about the only vice he needs — you guessed it, true love. You gotta love yacht rock for its unbridled romanticism. Our Trip Up in Time is awash with the spirit of love and the enduring promise that love can overcome all. Maybe I've just been locked up in my house too long, but listening to an album so dedicated to positivity and affection got me all misty-eyed. Sometimes you just want to set aside the cynicism and emotional barricades that modern life dictates and embrace the fluffy stuff.

Where the record gets tripped up (see what I did there?) is Gottfried's tendency to drift into jammier pastures. I know what you're thinking and, no, I'm not using this as another opportunity to lament one of my less-cherished genres. Plenty of artists who flit in and out of the jam scene can marry that style with other forms. However, doing so with '70s soft rock can re-create some of the most egregiously shitty sounds the Grateful Dead ever peddled. Songs such as "Estimation of the Situation," with its sterile funk and envelope-filter guitar solo, gave me bad flashbacks to Bob Weir's '80s solo records.

To be clear, Gottfried is a hell of a guitar player. The record is filled with tasty licks and bluesy riffs. He also handles the bass and keys, as well as lead vocals, so there's no doubting his talent. When Gottfried operates from his points of strength, such as on the country-tinged "Time and Time Again," the results are really quite pleasing. For example, the record closes on the standout track "Zeroes and Ones." Gottfried's voice rings out clear as he croons over a Randy Newman-esque tune about algorithms and, of course, love in the digital age.

Our Trip Up in Time is a defiant genre piece by a musician seemingly uninterested in masquerading as something he's not. Download it at zoerobin.com and let a little sun in.