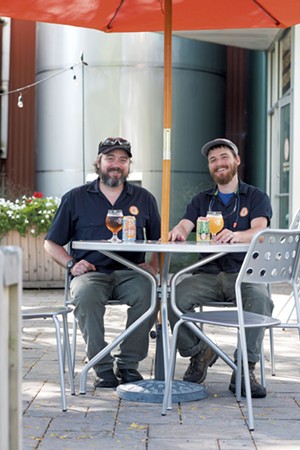 When Lawrence Miller founded Otter Creek Brewing in a pint-size space on Middlebury's Exchange Street in 1991, it was one of very few Vermont microbreweries. But Miller's easy-drinking Copper Ale quickly gained a following and, by 1995, the brewery grew into a larger space down the street.

All the while, production expanded as demand for craft beer surged. Vermont's brewing industry took off, and consumers' palates began gravitating to light-bodied, hop-forward beers.

With ambitious, gregarious brewmaster Mike Gerhart leading production, the brewery began to emphasize its hoppy offerings, which had outpaced the more traditional styles in sales. The Wolaver's brand was a casualty to this trend in 2015, even as a splashy 2014 rebrand transformed Otter Creek's wholesome, Vermonty image into something more fun-loving, modern and bohemian, with Gerhart's visage front and center.

In 2016, the completion of a new 120-barrel brewhouse made Otter Creek the state's largest brewery; annual output is now 100,000 barrels per year. In 2017, Gerhart decamped to the Northeast Kingdom to brew at Hill Farmstead. Since then, two brewers have filled his shoes: head brewer Nick Smith and production manager Robbie Leeds.

Last week, Smith and Leeds spoke with Seven Days about transitioning from a one-man leadership structure to a more collaborative model. They also dished about malts and salts, cans and kegs, and whether the market is reaching peak hop saturation.

SEVEN DAYS: How did you get into brewing?

NICK SMITH: I first started when I was washing dishes at a brewery in Kansas — I wanted to brew so badly instead of wash dishes. Then, when I was working [in the back of the house] at another brewery in Arizona, they finally put me onto brewing full time. So I was working in kitchens at breweries, and I saw an opportunity to make one thing and do it really well, instead of making so many different things. When I moved to Vermont nine years ago, I started at Otter Creek. It's the first and only brewing job I've had here.

ROBBIE LEEDS: I was a homebrewer during college at Green Mountain College in Poultney, and I started making hard cider at Champlain Orchards. I really liked beer, so I decided to go into the beer business. I started five years ago in [Otter Creek's] packaging department and, after lots of reading and mentoring [from the other brewers], I was able to get to where I am now.

RL: I actually have a Kegerator at my house, and I'm currently pouring Free Flow IPA.

NS: The last beer I had was a three-ounce sample of [Long Trail's] Double Bag — at six this morning. We sample one from the package and then another prior to packaging to make sure everything is right before it goes into the bottle.

SD: What's it been like to be at the company during such a transformative period?

NS: I've had a lot of bosses. But with each transition our equipment and funding improved. Each person that passed through this brewery educated me, and also left their own personal mark on the brewery. When Robbie showed up, Mike put us on recipe development. Now we're in management, and some of those early recipes we were doing are now beers that we're seeing go out to market.

SD: Do you miss the efficiency of having just one person in charge?

NS: It was nice to have an overall leader, but the transition has been smooth, and it's allowed Robbie and me to step out from the background and to work together as a group to come to solutions.

RL: With Mike being the go-to guy, you had to go through him for everything, so people weren't able to build their confidence. When I had the opportunity, I'd just ask him so many questions every day and soak it all in, and everybody did that. So, when he moved on, we were able to kind of say, "OK, what are the things I might be good at, and what might you be good at?" So we can make collaborative decisions as a whole and look at things from different perspectives. I'm grateful for everything that Mike taught me — he's definitely a wealth of knowledge, and it was cool to have the time with him that we did.

SD: What kinds of beers are you excited about brewing right now?

RL: We've been on a serious lager kick lately.

NS: The lagers present a challenge, which kind of brings us together and helps with building our knowledge. Other employees weigh in, too — everybody has a seat at the table when it comes to recipe development.

SD: Any brews you're particularly amped about?

RL: We have a Mexican-style amber lager — it isn't out yet, but it will be out soon — that's inspired by a typical Mexican beer like Dos Equis. We're also working with community partners to make a pumpkin beer for the Shed [Brewery brand] and a [low-ABV lager called Tiny Mountain] using local honey from Champlain Valley Apiaries, and using hominy from All Souls Tortilleria. It's a light amber lager with this really bright, fresh corn taste — very easy to drink. That'll be a year-round release in 2019.

SD: How has the industry changed since you started brewing?

NS: There are more brewing schools, and we're seeing more and more people coming in to entry-level positions with formal education. They're looking to advance in the industry, which is great for a company like ours because we can give them experience, and they can work toward the higher-level positions. So it's less pulling people like myself out of kitchens and saying, "OK, you're a brewer now."

RL: There's a lot of trend-chasing right now, a lot of "These guys just made this new style, so let's make one of those." Things move so quickly, so that gets really intense and stressful. I've just fallen back to focusing on quality and trying to brew beers that people will enjoy drinking, that are consistent and that I'd like to brew.

SD: Any new trends you are into playing around with?

RL: People are making these milkshake IPAs, which are these strange beers that are often really fruit-forward, but they have lactose in them. One of our guys made a raspberry milkshake IPA that's going on draft today. And of course it's fall, so we have Oktoberfest on draft and it is delicious.

SD: I've heard some people gripe that the market is really saturated with hoppy beers. Has that been reflected in your IPA sales?

RL: It definitely feels like the marketplace is full of IPAs right now, and some of our top-selling beers are hop-forward beers. It's kind of like when Americans got really into pilsners, and for a long time the only thing you could get was pilsners. So it's a little scary to see that kind of thing happening with IPAs.

NS: We're seeing hop-forward beers that emphasize the [hops] flavors and aromas instead of smacking your mouth with bitterness. I've also noticed more Oktoberfest out there this year than I have previously. That's a malt-forward style that comes and goes because it's a traditional seasonal style.

SD: How much have you been playing with new or different malts in your recipe-development process?

NS: Sometimes there can be too much variety. You have seven different grains [in your beer], and sometimes you can taste two of them — the others are just for color. So you don't need seven different types of malts. You just need to be very specific about knowing what the malts are and what to do with them.

RL: Part of that is also working with the salt profile of a beer. If we're going to be making darker, maltier beers, it's making sure the pH doesn't drop down into the bitter range. We're using malts as well as salts to bring up the pH, so you get a round flavor without the bitterness.

SD: What would you like to see from the industry, now and in the years to come?

RL: Having made cider in the past and being a pretty big fan of fruit wines, I would like to see more experimentation on those fronts. Sour beers are becoming popular, and that's pretty cool, but they take a long time to make and they're expensive. So I'd like to see some fruit variations at a more normal price point, that are just part of the usual production.

NS: Everybody's buying beer in cans right now and that's great, but aluminum costs money. But I think something that's being lost is home tap systems and Kegerators. They come in all different sizes, and they're the cleanest, most efficient way to get beer out to people. If you really want the freshest, best product, it's best to invest in that. So, I guess I'm encouraging people to come in more often and buy a keg, take it home and swap it out with something new when it's finished.