Rob Mermin's Career Outside the Box 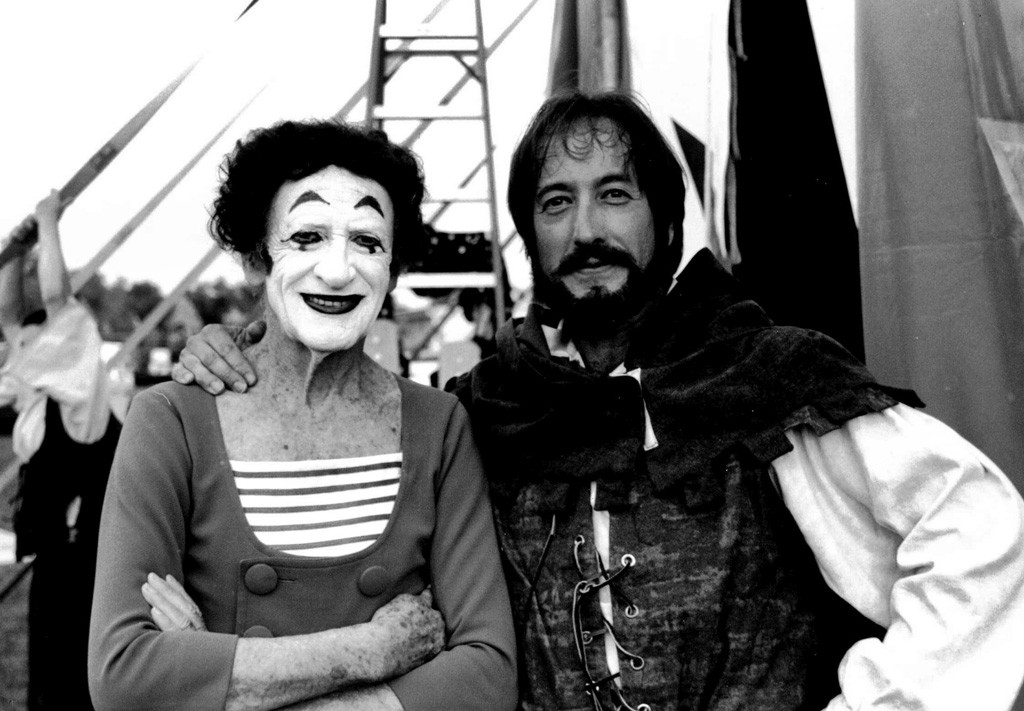 Mimes have received a tough sentence in the court of public opinion. Though professional mimes study for years to hone their ancient and specialized craft, they're often still the butt of jokes about locked boxes and stiff wind storms. The fact that they can't (or don't) speak up in their own defense doesn't help their case.

Montpelier's Rob Mermin, founder of Circus Smirkus and a mime of renown, aims to alter that perception in a handful of solo shows scheduled for Marshfield's Unadilla Theatre in August. In Adventures in Mime & Space: The Legacy of Marcel Marceau, Mermin combines theater, film and something like a PowerPoint presentation to celebrate the career and art of the great French mime. Similarly structured are Circle of Sawdust: The Mud, Myth, Magic and Mayhem of Circus!, and Silents Are Golden: A Celebration of Silent Film. As Unadilla's 2015 artist-in-residence, Mermin will also host a free Monday-night silent-film series.

Mermin studied with Marceau at the latter's Paris studio and remained a close friend until Marceau's death in 2007 at age 84. The American mime created Adventures in Mime & Space as a tribute to his late mentor. "I'm just afraid that his name and his legacy have been forgotten now," Mermin says. "I'm on a mission to promote the art of mime and Marceau's legacy."

"When I was young," he continues, "training with Marceau really altered my life. He gave me a sense of perspective on the world, a different perspective. He used to describe the art of mime as 'the identification with the essence of all things that surround us in nature, and the portrayal of human thoughts and motions through silent physical expression.'"

That's a far more thoughtful approach to the art than we might expect from the average street busker.

The other two shows in Mermin's ambitious triptych explore further facets of their creator's career. Both Circle of Sawdust and Silents Are Golden delve into art forms that define and are dear to Mermin. He says he worries that, just as mime is generally misunderstood, so are silent film and the circus arts. In fact, Mermin fears those art forms are in danger of extinction. Though all three shows are explicitly personal, that timeliness also makes them political.

Mermin developed his trio of presentations in the past six years. In Circle of Sawdust, he uses his own unusual autobiography as a framework for exploring the world of the European traveling circus in the 1960s and '70s.

At the age of 19, Mermin literally ran away from home to join just such a circus. "I wanted to find an unconventional lifestyle of renewable adventure," he explains.

Silents Are Golden is Mermin's tribute to the stars and films of the pre-talkie era — films that, he believes, are insufficiently understood and celebrated by modern audiences. It's easy to understand a mime's affinity for their performers, who had to tell stories and jokes without the benefit of spoken dialogue. In his show, Mermin says, "I focus on how the performing style developed from very grandiose, theatrical, exaggerated gestures into a very refined, realistic style of silent acting as the '20s developed."

Mermin realizes that the packaging of his three shows makes them look like a career summary — and that's true in part. Now 65, he's contextualizing and taking stock of his achievements. "I see [these three shows] as a mission to promote the forgotten art forms that have made up my career," Mermin says.

Perhaps best known to Vermonters for creating Circus Smirkus, Mermin still acts as creative adviser and "ambassador" for that touring youth troupe, but he ended his formal affiliation with it about a decade ago.

Mermin's artist residency at Unadilla this summer grew out of a successful single performance he staged there last year. As theater founder Bill Blachly puts it, Mermin is "both amusing and a very humble sort of man. I thought this [three-show arrangement] might be a good thing for us to do." Blachly expresses admiration for the unusual format of Mermin's shows, which combine lecture, autobiography and performance.

These celebrations of the joys of Mermin's favorite art forms have taken on an unexpectedly poignant tone. Six months ago, Mermin was diagnosed with Parkinson's disease, a degenerative condition that compromises motor control. The irony is not lost on a man who has made his living using movement to communicate with and delight others.

Still in the earliest stages of the disease, Mermin shows no outward symptoms; he sits, stands, walks and gestures without observable complications. Though he says he's aware of a slight restriction on his movements, he does not expect the condition to adversely affect his upcoming performances.

And now, he adds, he is even more conscious of every move he makes. "I'm still at the stage where I'm very curious and fascinated by these Parkinson's symptoms, because it's like doing mime all day long!" he says. "Onstage, you have to be very aware of your movements, and very controlled."

Mermin is optimistic that his movement training will serve him well as the disease progresses. Though no cure yet exists, a number of studies suggest that physical exercise can mitigate Parkinson's symptoms, as can programs of highly controlled movements such as tai chi. Mermin, who has taught mime and circus classes for decades, envisions adapting his skills to teach such classes specifically for Parkinson's sufferers.

As innovative a performer as Marceau was, he likely never envisioned his art form used for such a purpose. But no one is in a better position than his Vermont protégé to take mime in that unexpected direction. m