Side Dishes: Plainfield BBQ closes; Spanish resto to replace it 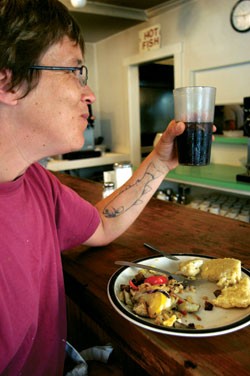 Few Vermont eateries attain the fame of Plainfield’s River Run, which Mississippi-born chef Jimmy Kennedy opened with his then-wife, Maya, in 1991. Over the next 18 years, the barbecue joint — which brought fare such as catfish, hush puppies and fried dill pickles to central Vermont — racked up accolades.

In USA Today, it was singled out as one of the nation’s “top 10 catfish restaurants,” and Smithsonian Magazine lauded the “memorable, homemade food that is fast disappearing from our own family fare.” In Food & Wine, famed playwright, screenwriter and director David Mamet called River Run “the best place on Earth.”

That may be why River Run regular Bryan Pfeiffer was a little distraught when he and his Thursday breakfast buddies found newspaper covering the windows. “There’s something about a table set with coffee, eggs and home fries that creates fertile ground for cantankerous morning conversation,” Pfeiffer says. Later he adds, “I wanted to grow old eating breakfast at River Run.”

He’ll have to find a new place to get old. Last year, when Ignacio Ruiz bought River Run, he had a two-prong plan: Kennedy would keep making pancakes and cheesy grits in the a.m., while Ruiz would prepare the cuisine of his native country, Spain, in the evening.

For seven months, that’s what they did. Kennedy no longer had to deal with the administrative aspects of owning a restaurant, which freed him up for other pursuits such as professional competitive fishing, but his presence behind the griddle kept longtime customers such as Pfeiffer happy. Ruiz introduced paella, garlic shrimp, meatballs in wine sauce and seafood stew in the p.m.

Two weekends ago, on a whim, Ruiz decided to eliminate breakfast, change the eatery’s name to Tasca and serve Spanish fare at lunch and dinner seven days a week, plus Sunday brunch. “It was a total impulse, a very Spanish impulse,” he says with a chuckle. The spot will reopen this week with its new name, after a few renovations.

“My intention was not to get rid of breakfast,” says Ruiz. “But I think it’s a formula that’s not working anymore.”

Why? The early-morning hours were reportedly costing the restaurant more than it brought in. “Where we stand right now, dinner has kept River Run alive, economically,” Ruiz says. He also believes the restaurant’s split personality was confusing customers.

Ruiz claims even old-timers have learned to like his Iberian cuisine. “There are definitely Plainfield townies who have been coming since it opened [in 1991] and are very receptive,” he says. Although Spanish food may seem exotic to some, Ruiz calls it “very homey; it’s the food I grew up eating.”

He says he spoke briefly about the changes with Kennedy, with whom he has a “very good relationship.” “He seems to be on board,” Ruiz says. “It’s a little bittersweet for him, because it’s his baby, but ultimately I think he just wants it to succeed.”

Kennedy agrees that, given the unexplained drop-off in breakfast business of late, changing the concept made sense. “As a business decision, it was probably the right move,” he says. “We’ve discussed in the last two months how I would feel about things like changing the name.”

But Kennedy still seems surprised by how the changes at the eatery came about. “We obviously don’t agree on everything,” he points out, referring to himself and Ruiz, “but we do get along.”

The BBQ expert — who keeps busy working as a spokesperson for Cabot — was out of town at a fishing tournament when he received a text message from Ruiz suggesting he get in touch. Because of the rigors of the competition, Kennedy says, he didn’t notice the text until he’d already heard secondhand the news of River Run’s closing.

Commenters on Blurt, the Seven Days staff blog — where the River Run story first appeared last Friday — have taken issue with the abrupt transition. “If it’s not working, at least have the courtesy to announce a last day,” said somebody with the handle “Give Us Our River Run Back.”

“Up for Debate” agrees: “Had I known what changes were going to take place, I would have gotten to River Run as soon as possible for a last feast.”

Kennedy, who’s fielded numerous phone calls from upset fans since he got back to town, shares the sentiment. “They just wanted a little more notice,” he says. “For me, it was an issue, because it felt like there was no closure for something that’s been there a really long time.”

To remedy the situation, Kennedy will cook one last River Run breakfast on August 8. “We’ll give everyone a chance to come back in one more time to get their pancakes and bacon or catfish,” he says.

When Kennedy talked to Ruiz, whom he calls “Iggy,” he also asked to keep the River Run name so he can use it for a new barbecue catering company. “I’ve been looking into some pit-smoker trailers,” he explains. “I’ll probably start up this fall.”

Pfeiffer, a writer, naturalist and host of “For the Birds” on WDEV, notes he’s unfamiliar with “tapas” and isn’t much of a dinner person. He says he wishes Ruiz well, and that he’s happy to have the cozy Maple Valley Café nearby so he can keep eating eggs and home fries with his friends. “I’m big on breakfast,” he says. “I think that’s why this hits me more than other folks. It’s the culture of breakfast, the angle of food and community, that we’re losing.”

Anthony Spector, who raises grass-fed beef as owner of Spruce Mountain Farm, has a cheerier take on the transition. “The Spanish menu is delicious,” he says. Like many central Vermonters, he’d never tasted Ruiz’s style of food until recently and says, “It’s not what I expected. I expected it to be like Tex-Mex, but it’s not. There’s really interesting seafood. After years of greasy Southern barbecue, it’s nice to have fresh fish.”

Spector recalls Mamet saying River Run was where “poets and farmers eat together.” But he contends that can happen at a tapas place, too.

Pfeiffer doesn’t agree: “Plainfield has lost a place where writers, farmers, mechanics, artists, firefighters and a few local misfits gather under one roof, sharing tables overflowing with food and damned good conversation,” he says. “Restaurant suppers don’t offer that kind of venue. The sun is setting on a tradition.”

After nearly two decades, Spector admits, the restaurant famed for its catfish and conversation had become part of the “fabric of the community.” But he thinks that, in time, Tasca will evoke reactions just as warm, and concludes, “I like the changes very much.”

As for Kennedy, he seems pragmatic — he knew he was relinquishing control of River Run’s fate when he sold it — but sad nonetheless. “[Selling to Ruiz] was a great opportunity for me and my family, but I had to resign myself to the fact that I was selling half my life,” he says. “It wasn’t an easy decision for me.”