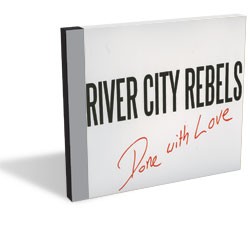 On River City Rebels’ eighth album, Done With Love, the band taps into a more classic-rock-influenced sound than its earlier punk canon, presumably to show how much the Vermont-based band has matured since 1999. Unfortunately, the results tend toward cliché, and the album doesn’t rock nearly as hard as one might expect, especially given the Rebels’ raucous back catalog. It’s a fun listen once or twice, but it gets old fast.

The album gets off to a promising start on “One Sheet.” The saxophone lead and backing organ will make you want to drive fast with the windows down. Vocalist Dan O’Day grabs the spotlight and matches his bandmates’ urgency early on. It sounds like he’s singing with his entire body, putting everything he has into each line. When he howls, “Only the bowery knows what I’ve missed,” it truly feels as if the weight of his entire life is behind those words.

The next track, “Down in the Basement,” highlights everything that is wrong on the record. For starters, it opens almost exactly the same way as “One Sheet.” This time, though, the song is an attempt to spin a somber story about the hardships of the lower class. O’Day reels in his vocals in an attempt to match the song’s melancholia. Instead, he just sounds bored. All the feeling he had on the previous track is gone. The song meanders on until the outro — a minute of O’Day repeating the titular phrase, “Down in the basement.”

One of the most inspired moments on the album is “Gone Forever.” While O’Day’s vocal performance still doesn’t quite match his intensity on the lead cut, the addition of Sarah Stovall’s violin makes the song. Rather than the pointless strings that are often added to the background of highly produced ballads, her playing is vibrant. Her lines dance around the guitar and keys, weaving in and out of the melody and lending the song a unique texture.

The album closes with a ballad, “Wedding Bells.” While lines such as “I hear wedding bells / and I wish the best for you,” are delivered with enough sorrowful heart to make you want to hit the bottle immediately, the song becomes painfully repetitive. It never picks up beyond slow quarter notes and half-whispered vocals. There is great potential to build to a huge emotional crescendo, but instead the tune drifts aimlessly for four minutes before simply petering out.

On Done With Love, River City Rebels try to take a classic sound and add their own flair. At times they succeed. But at other times the band falls victim to self-indulgence. An album that starts as a decent listen loses luster in derivative sounds that others have made far better before them.