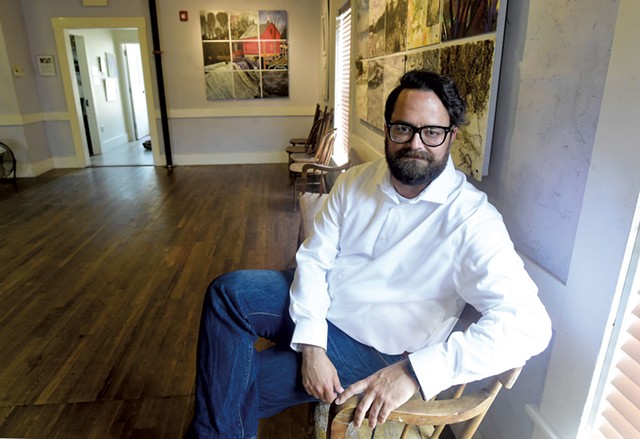 Joseph Pensak already wears plenty of hats, but that's not stopping the Redeemer Burlington pastor and New City Galerie director and head curator from adding another to his collection. Pensak, 42, is the new executive director of River Arts, a community arts nonprofit based in Morrisville. Former executive director Dominique Gustin is leaving the organization — whose space on Pleasant Street houses a kitchen, banquet hall, gallery and clay studio — to work at the Vermont Arts Council.

Pensak is stepping into his new role as River Arts gets ready to celebrate its 20th anniversary next year. In his third week, he's already brimming with ideas for how the nonprofit will ring in its next phase of growth. He told Seven Days that now is a good time to set up an endowment to address River Arts' operating costs, such as paying off the remaining $64,000 of its mortgage. The goal is to focus more of the nonprofit's grant writing on funding its year-round lineup of programs, from classes and summer camps to public exhibitions.

Pensak also wants to use his new position to do in Morrisville what he's been doing for years in Burlington: help emerging artists find platforms for their work. At New City, he and his team often showcase artists from marginalized communities through guest-curated pop-up shows, as well as one show a year with such communities as the focus.

"I love the intersection between art and justice," he said. "Saying, 'We're not here to tell your story. It's your story to tell, and we're just providing a platform for that.'"

In everything he does, from the artistic to the theological, Pensak seems to keep an eye out for the underdog. That quality helped him stand out to the River Arts board during the job application process — the nonprofit's motto is "Arts for Everyone."

Board chair Nan Carle Beauregard said the board was impressed, during the interview, when Pensak named theologians and social justice activists Jean Vanier and Henri Nouwen as his role models. "Both of these men embodied the role of love and the voice of inclusion," Beauregard said in an email. "Joseph has interpreted those attributes in music and art — the restorative nature of art."

"I love the intersection between art and justice." Joseph Pensak tweet this

The father of three somehow also finds time in his busy schedule to make music. He recently released a debut self-titled album of "modern sacred music" under the moniker Hallowell. It's a full slate of undertakings, but Pensak has already done the mental math: He'll average 30 hours a week at River Arts, 10 at Redeemer, and three or so at New City.

Owing to the increasingly cooperative nature of the Burlington gallery and the involvement of its artists-in-residence, he notes, the place can run itself to an extent. Construction on the roof has put the physical New City space out of commission to the public for most of the summer. Meantime, the Overnight Projects-curated June-July exhibition, Katya Grokhovsky's "Privately Owned," was relocated to Karma Bird House, which shares a gallery space with Maglianero Café.

Pensak, who fundraises for both Redeemer and New City, patchworks his jobs together for the sake of his livelihood, but he also finds them complementary.

Pensak anticipates he'll build more community and relationships as he familiarizes himself with the arts scene in Morrisville; his natural impulse is to "walk around and get to know people," he said.

Also, he plans to use his own musical experience and connections from New City's Sunday Night Folk Series to expand River Arts' music programming — another element that Beauregard said stood out in Pensak's application.

Ultimately, Pensak hopes that outreach work and River Arts' other endeavors will help draw artistic talent to the Green Mountains.

"All these young artists come from literally all over the world, and some of them end up staying because they fall in love with Vermont," Pensak said. "I want to draw young artists to stay here."