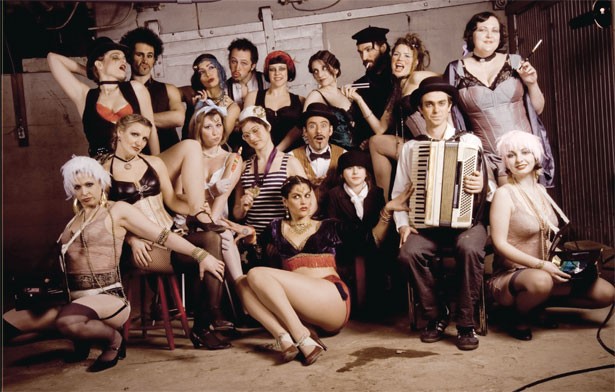 Burlington’s homegrown troupe of scantily clad merrymakers, the Spielpalast Cabaret, celebrates its eighth year with a delightful new show at the Waterfront’s Black Box Theater. To elucidate Spielpalast’s quirky stage appeal, one might undertake a sophisticated deconstruction of its theatrical antecedents in late Victorian burlesque parody, Weimar German cabaret and American vaudeville. Or one could stick to a simpler assessment: It’s just unbelievably entertaining. You laugh your ass off, and the high-caliber talent is dazzling.

Spielpalast translates from German as “palace of play,” and a muscular playfulness does infuse this show. The performers energetically embody a variety of voluptuous, vixenish and villainous characters, inspired by seedy denizens of the early-20th-century demimonde. The program fills in their dubious pasts with elaborate fictional bios instead of the usual recitation of actors’ stage credits. It points out German-speaking Anna Spetzel’s (Jessie Owens) skill as a “cunning linguist,” for example. But it doesn’t spell out whether Vaurienne Couche-Partout (Eva Sollberger), whose French last name means “sleeps everywhere,” has similar, er, talents.

The evening’s format is a revue, hosted by cheeky, loud-suited Master of Ceremonies Maxwell (Phinneus Sonin). Max’s “girls” — a dozen ladies in lingerie — perform numbers that incorporate an astonishing array of music and dance styles. Brief sketches between the songs include joke-telling, juggling and absurdist group pantomimes involving a giant papier-mâché monster head. Sonin’s effervescence is irresistible, and silliness and naughtiness rule. But touching moments take place, too.

A seven-person band, “The Weimar Sechs,” accompanies the action, playing from the stage in character. Bandleader Ernst (Randal Pierce, on piano and accordion) banters with Max, and musicians occasionally put down their instruments to act in sketches. The live music is indispensable to the cabaret atmosphere, especially the tinny upright piano and wacky percussion effects. Pierce, who serves as co-music director with drummer Jesse Rosenfeld, has composed lots of original music for the show, and arranged and orchestrated many of the evening’s other tunes.

This year’s production feels much tighter and more focused than Spielpalast Cabaret was when I first reviewed it four years ago. It helps greatly that the running time — at just two hours — is an hour shorter than the 2005 version. Gone are numbers that dragged and felt superfluous, such as the deliberately inept magician Mephisto.

Instead, the pacing feels perfect. Most numbers provoke big smiles from the audience; some of the tunes soar. The skill level in the ever-evolving ensemble has clearly risen. Cabaret cofounder Lois Trombley’s choreography shines, in part because her hoofers draw on ballet, tap and modern dance skills to execute her work with élan. The ladies snake elegantly around the stage in the sinuous “Indo-Turkish Delight,” to an original overture by Pierce. It climaxes with a frenzied Dance of the Seven Veils, which grows less seductive as the scarves come off to reveal gangly, grinning Max.

The evening’s songs demonstrate that the corseted dancers also possess an impressive range of vocal abilities. The “Shock Opera” scene has a crazy medical storyline, but Bianca Mayifanka (Laura B. Wolfsen) and Waclawa Wackawlak (Jane Snyder) sing a concert-hall-worthy rendition of an aria from Mozart’s The Magic Flute as the madness unfurls.

The classic Depression-era tune “Brother Can You Spare a Dime” makes for a moving scene midway through the second act. Tape-covered cardboard boxes represent a Hooverville; drab costumes envelop the cast. As a spotlight follows, Sollberger descends through the audience, ethereal in a delicate lace dress, singing the familiar melody with mournfulness and soul. Also surprisingly touching is the group finale, “It Might as Well Be May.” A maypole-themed dance unfolds to the lovely original song written by Galen Cassidy Peria, who plays Max’s dashing, dastardly rival, Thibideaux Charlebois II.

The only small drawbacks in the production stem from the physical limitations of the Black Box Theater, which is not a true black box, meaning an infinitely flexible theater space. Because the seating is fixed and tight, mischievous Max cannot solicit as much audience participation as he could in recent years at Contois Auditorium or Higher Ground, where he (and the ladies) could circulate more freely.

A more serious flaw is the hall’s perpetually tetchy acoustics. The band sounds great, but it is difficult to hear the singers’ lyrics clearly unless the instruments play softly. For the most part, vocalists compensate well, and actors project spoken dialogue forcefully, overriding the ceiling’s propensity to swallow speech.

“Times are tighter than a cabaret girl’s fishnets,” purrs Thibideaux at the top of the show. And so they are. But there can be no better investment during a depression — or a recession — than laughter, with a generous measure of, um, stimulus in the package. Twenty bucks for two hours with Maxwell and his bevy of talented ladies? A bargain.