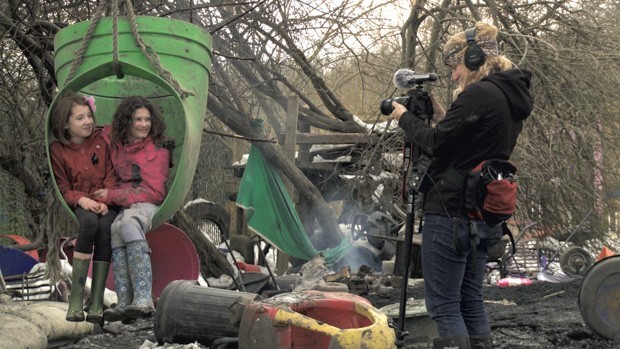 In 2012, Middlebury filmmaker Erin Davis visited the Land, an "adventure playground" in Wales where kids are free to climb trees, hammer nails, build fires and take risks — all with minimal adult supervision. What looks to most adults like a junkyard — tire piles, wood pallets, fire pits, old mattresses — is actually a challenging terrain in which kids build forts but also strength, stamina, confidence and creativity. The result of Davis' trip is a documentary, The Land, which is due out this fall. Click here to see a trailer.

Though Davis, 33, discovered this adventure playground just two years ago, thousands have existed throughout Europe for decades. The concept arose in 1930s Denmark, where a landscape architect noticed that children weren't playing in playgrounds he'd designed but preferred abandoned lots, decrepit buildings and other places that had fallen into disrepair. Realizing that junkyards were more stimulating environments for kids, he put up a fence around one and invited kids inside.

The Land isn't totally unsupervised. Adult "playworkers" ensure that things don't get out of hand. The playground is surrounded by an eight-foot fence, and the gate gets locked at night. Children as young as 5 can come and go at will, though by their early teens, Davis says, they tend to get interested in other things.

"I knew Americans were concerned with safety, but I didn't know we were so obsessed," Davis says, referring to a "surreal and bizarre" April interview she did with talk show host Katie Couric. "She kept asking me, 'Is it safe? Is it safe?' And I said, 'No! Of course it's not safe, but neither is the traditional playground.'"

In fact, though minor cuts and bruises are fairly common, Davis reports that the Land has never given rise to a major injury. That's the case at most other adventure playgrounds, according to the New York-based nonprofit Alliance for Childhood. The group commissioned a study of adventure playgrounds, which found that they had relatively low rates of injuries compared to conventional playgrounds.

I reached Davis by phone in Middlebury, where she was editing her forthcoming film.

Kids VT: What was your initial impression of the kids you met?

Erin Davis: The most obvious thing at first was their physical competency, their strength and agility. What I saw were kids who were physically competent in ways that not every child is or can be in the States if they're not given the freedom to stretch their arms and legs. They can manage fire really well, and they have an incredible sense of balance. They climb everything and build structures to climb on. All kids have this capacity, if they're given time and space and materials.

KVT: What surprised you the most?

ED: The playworkers and how seriously they take their jobs. The practice of their work is extremely reflective and humble. What surprised me is the level of restraint and calmness they have in situations where normal people would want to intervene.

KVT: What do Welsh parents think of the Land?

ED: They basically think it's a good thing. To them, their kid can go burn their energy and they know someone's got an eye on him. Parents may not totally realize the extent of what goes on there, but as long as [the kids] come home in one piece, they're OK with it.

KVT: Have you found comparable aspects of adventure playgrounds in Vermont?

ED: Vermont is a really cool, old-school place to grow up, but it varies. I know parents whose children live on multiple acres of land with forests and streams, and they're still inside most of the time. I'm not convinced that Vermont doesn't have a use for [adventure playgrounds].

KVT: Do you think adventure playgrounds could arise in America's litigious, fear-based culture?

ED: I absolutely, one hundred trillion percent say yes. You don't need to be in a junkyard to have adventure play. It's really about letting children control the direction and content of their play. If it's playtime and a kid wants to play with matches, then think about ways to accommodate that. If it's a boy who wants to play with Barbies, think about how you can accommodate that. It's all about checking your issues at the door.