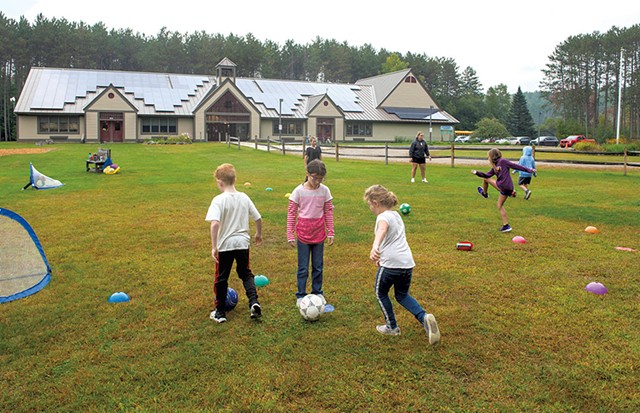 Sarah Paquette, a mother of three, loves everything about Ripton Elementary School. She's grateful for the individual attention her two sons have gotten from teachers there and appreciates the "family vibe" of the 53-student school, the only one in the tiny town.

She's worried, though, that her youngest child — just 18 months old — won't get the same experience as the older boys, ages 7 and 10. "I would be devastated if she didn't get to go to school here," Paquette said earlier this month as she watched her two sons romp around the school's playground.

But that very well could be a possibility, as townspeople once again ponder the school's future.

A year ago, Paquette and other Riptonians voted overwhelmingly to secede from the Addison Central School District, which had threatened to close the town's K-5 school. But now, rejoining the parent district may be the only way forward.

Voters will have their say on September 29, when they cast ballots in a referendum that could ultimately determine whether the school stays open.

Residents face a set of unsavory choices. They can vote yes and return to a district that once appeared poised to shutter their school — or no, potentially opening the way to a lengthy legal fight and longer-term uncertainties over whether the town, with 739 residents, is too small to serve as its own supervisory school district, as the state claims.

To many in town, the upcoming referendum feels like a catch-22 with a Groundhog Day twist. "I don't think there's any satisfactory answer for unity at this point," said Molly Witters, one of five members of the Ripton School District Board. 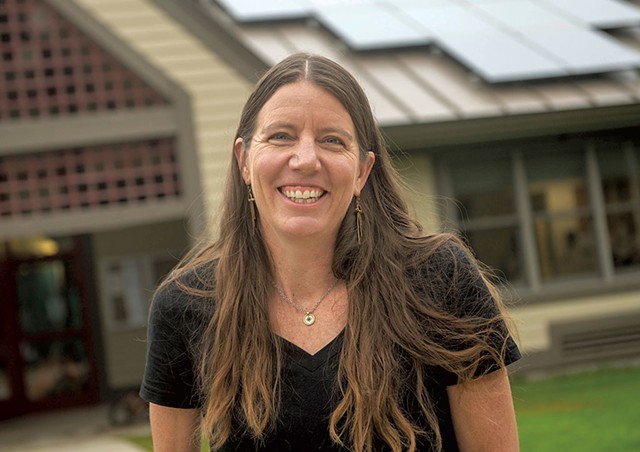 Ripton, a picturesque town set in the Green Mountain National Forest, is not the only place in Vermont facing such existential questions. The elementary school is among a slew of small, rural schools — including ones in Addison, Starksboro and Lincoln — that have opted during the past year to withdraw from larger supervisory school districts in an attempt to save themselves from potential closure.

Related Finances Threaten Local Schools Such as Lincoln's. Can Towns Afford to Lose Them?

Finances Threaten Local Schools Such as Lincoln's. Can Towns Afford to Lose Them?
By Jonathan Mingle
Education

The upcoming vote caps a year and a half of scuffling between Ripton and the State Board of Education over its capacity to administer needed services, such as special education. The tussle tracks with a larger debate surrounding the future of small districts under the 2015 school-merger law known as Act 46.

"Our state motto is 'Freedom and Unity.' And I think that motto and that balance — because there's sort of this inherent tension between freedom and unity — really speaks to the challenge that everyone's been facing with this withdrawal," Oliver Olsen, chair of the State Board of Education, said.

Those questions of freedom and unity in education have long been in play in Vermont, a state with a rich history of small-by-design rural school systems that were — and, in some cases, still are — locally governed. But plummeting enrollments and rising education costs led Vermont lawmakers to move to a consolidated education approach through the passage of Act 46.

Ripton and its neighbors took the state's initial guidance to heart. In 2015, Addison Central School District, which includes schools in Bridport, Cornwall, Middlebury, Ripton, Salisbury, Shoreham and Weybridge, became one of the first consolidated supervisory unions to form under Act 46. A supervisory union provides critical services — such as transportation, special education and data management — to its constituent districts by pooling resources. Students in the ACSD go to middle and high school in Middlebury.

But with the expiration of state merger money in 2017, ACSD began crafting a strategy for making the most of its limited resources that would include the closure of one to six of its schools. The ACSD board made it clear at that time that Ripton Elementary, no matter the configuration, would likely shutter.

Community members in Ripton were devastated and angry. If Ripton Elementary were to close, students would most likely be distributed to neighboring elementary schools, which would mean long bus rides down mountain roads. Advocates for keeping Ripton Elementary open said it has been a huge draw for the town and has been thriving. The school building, constructed in 1989, is also one of the newest in the district.

In a bid to prevent ACSD from shuttering the school, Ripton residents gathered nearly 1,000 signatures to change the district's articles of agreement so that Ripton, and any town faced with the same threat in the future, would have final say in its own school's closing. The idea is not new; most unified districts in the state already have protection provisions in place.

Ultimately, though, the ACSD board voted against changing the articles of agreement, thus sealing Ripton's fate.

With few options on the table, Ripton's school board voted in 2021 to secede from ACSD and form its own school district. "The impetus for going forward with this wasn't just educational, which certainly was part of it," Witters said. "But also that, as a town, we should have a say."

The next challenge for Ripton was finding a supervisory union to join. The town had been advised by an attorney at the state Agency of Education that it was too small to become its own supervisory district in the manner of larger stand-alone districts, such as Burlington. The problem was, none of the supervisory unions near Ripton wanted to take on the elementary school, citing financial hindrances and geographical challenges.

"The bottom line is," Olsen said, "nobody wanted Ripton. They sort of voted themselves off the island, and then they had no other island to go to."

That led the State Board of Education, in January, to make an unprecedented — and highly contested — move, designating Ripton as its own supervisory district. Ripton was expected to lay the groundwork for providing special education, transportation and central administrative offices for itself. Critics said the action set Ripton up for certain failure.

"In the case of Ripton, the State Board of Education has abdicated its responsibility to Ripton's children by placing Ripton in a position which they knew was untenable," said Margaret MacLean, who served on the State Board of Education from 2013 to 2015. She also was the professional development director for the Rural School and Community Trust, a nonprofit group that advocates for equitable funding for rural schools.

During this year's legislative session, state officials acknowledged the awkwardness of Ripton's situation and, more broadly, began to recognize that the threat of closures was prompting secession moves by small schools. In an effort to reverse the legal framework that landed Ripton in its predicament, the state legislature passed what is now known as Act 176. The measure requires stricter guidelines for districts seeking withdrawal and created what Olsen called a "one-time off-ramp" that would allow Ripton to undo its decision to secede and rejoin ACSD.

By July, Ripton was expected to show the State Board of Education that it was prepared to be its own supervisory district. Ripton collaborated with nearby Lincoln, which was in the process of seceding from its own district, to propose a merged "Mountain Supervisory Union" that would marry the two. But after reviewing Ripton's materials, the State Board of Education voted unanimously that there was an "overwhelming risk" if Ripton assumed full responsibility for educating its students next year, whether on its own or through a new supervisory union with Lincoln.

The State Board is expected to respond to Lincoln's withdrawal plan later this month. The board has already advised Ripton and ACSD officials to discuss reconciliation. That left Ripton, in many ways, right back where it started.

Ripton's efforts, however, appear to have begun shifting the needle at ACSD. Peter Burrows, the district superintendent, acknowledged in a recent board meeting that the issue of small schools seeking a say in their fate isn't going away. ACSD has formed a subcommittee looking at changing its language and policy around school closures. And the board has two new members who support the rights of small schools. But Witters said that by the time Ripton residents go to the polls this month, they won't know whether ACSD will make the changes necessary to protect Ripton from closure.

On the Ripton Elementary playground, Paquette sounded like many other parents: confused over what is the "right" vote for her children. But, she said, "whatever we can do to keep the school open is the choice."

Olsen credits Ripton for elevating the school closure conversation to the state level, where it has garnered legislative attention and opened discussion about the unintentional consequences of Act 46.

Witters said that isn't enough. Ultimately, Ripton's fate — and that of other small schools around the state — is still shrouded in uncertainty.

"Were doing this for all small communities in ACSD and, really, across the state," Witters said. "We want to have a conversation about how Act 46 is really manifesting. Can we check back in and say, 'Is this working? And if it's not working, what should we change?'"

Correction, September 21, 2022: Weybridge did not withdraw from its school district. A previous version of this story contained an error.