A sister act delivers comfort food to the Burlington suburbs 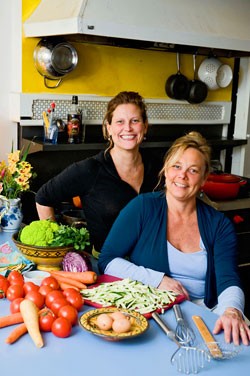 Two sisters, one kitchen. In many households, this would be a recipe for disaster. In the Dinner Belles’ domain, it’s a recipe for hearty fall dishes such as beef bourguignon with seared meat cubes bathed in a lush red wine sauce, complemented by earthy mushroom chunks. Or smoked-turkey tamales scented with a hint of cinnamon and topped with poblano cream sauce.

And sibling rivalry isn’t an issue: “We have a lot of fun,” says Connecticut native Jennifer Blanchard of the company she runs with her sister, Sarah Anderson. “A lot of laughter goes on in the Dinner Belles kitchen.”

Dinner Belles? The name evokes a hoop-skirted Scarlett O’Hara-type calling her menfolk in from the fields for dinner. Or maybe a klatch of elderly ladies whipping up church-supper pot pies. But as retro as it may sound, their biz is anything but. Blanchard and Anderson’s 3-week-old company specializes in delivering what Blanchard refers to as “hearty, wholesome dinners” — an entrée and two sides — to its customers’ doorsteps. As Vermonters work more and more hours yet worry about the nutritional consequences of fast food and takeout, feeding them is a growth business. The Belles operate five days a week and service Charlotte, Shelburne, Vergennes, Hinesburg and Ferrisburgh.

And the sisters don’t do church suppers. The two moms — each has three children — pack some serious culinary wallop. Blanchard, older by six years, spent 18 years living in southern France, where, she says, “I shopped and saw what was fresh and brought it home and cooked with it: fresh fish, lemons, olive oil, cheeses.” She easily tosses off terms like pissaladière — a Gallic flatbread traditionally topped with onions and anchovies.

A visual artist and nurse with a degree in tropical medicine, Blanchard has also spent significant periods of time in Malawi, Sudan, Burundi and Ethiopia. “My work in Africa definitely enhanced my appreciation of food — the lack thereof on one hand, the enjoyment thereof on the other,” she muses.

An accomplished home cook by her own account, Blanchard likes to whip up French specialties such as individual mushroom tarts, as well as Ethiopian fare. “I love the community of food,” she says. “I appreciate people coming together around food as a means of communicating and loving.”

Younger sister Anderson covers the professional cooking side of the equation. Educated at the French Culinary Institute straight out of high school, and later at Le Cordon Bleu, she spent 14 years at the helm of a 4000-square-foot gourmet store and catering company in Chicago, Song o’ Sixpence. Although she still owns the store from afar, she “was ready to get out of it” when she moved back East, and says her current manager hopes to purchase it eventually.

While Anderson was still in full swing at Song o’ Sixpence, Blanchard and her husband, who is a French native, decided to settle down in the United States. They chose Vermont, in part for its proximity to Francophone Québec. Last year, Anderson brought her family here to be closer to her sister. “She has always loved Vermont but mostly wanted to join me,” Blanchard says. “I lived out of the country for so long that it’s a treat for us to actually be neighbors.”

For now, Dinner Belles is the closest either sister has to a full-time paying job. The company “came to fruition out of a desperate need for some money, and we said, ‘What can we do that we can do right now, right this very second?” Blanchard says. The sisters do their company cooking in the Blanchard home, a charming, pale-yellow farmhouse with a view of Lake Champlain. The “heart of the house” — that’s the kitchen — fetchingly blends rustic and modern qualities, with its butcher-block island, stainless steel fridge and six-burner gas stove with a hood. “It came with the house,” Blanchard says.

As they work, it’s easy to tell that Blanchard and Anderson are related. They share the easy patter of siblings, and there’s the occasional nitpicky joke or friendly slap on the behind. On one evening, both wear lime-green aprons and have their dark blond hair twisted and pinned atop their heads. As they work, their respective children wander in and out of the room — 3-year-old Henry, whose tousled hair indicates he was recently napping, passes with a blanket in one hand and a toy car in the other; teenaged Francesca makes a cup of soothing tea in preparation for her role as Mimi in CVU’s production of Rent.

For now, Blanchard is focusing on Dinner Belles’ shopping and marketing, while Anderson does most of the cooking. “We’re going to do more of my ideas later on, once we get going,” Blanchard says. But for now, they’re relying on “Sarah’s experience cooking for the masses, cooking well for lots of people.” And Anderson looks self-assured in front of the stove, effortlessly tending a pan of scallops that she’ll sear to perfection and douse in a white wine and butter sauce.

Because they’re so new to the business, though, not everything works like a well-oiled machine. Yet. Dividing up the evening’s delivery routes can present a challenge, as can wrestling the portions into the appropriate-sized packages. “Does this look like enough for six people?” Anderson asks her sister. Then remarks, “Someday we’ll get a scale for this.”

Price-wise, Dinner Belles occupies a bracket somewhere between making everything at home from scratch and taking the whole family out for a nice meal at a restaurant. Right now, the Belles charge $55 for dinner for four and $70 for fare for six. Though they’d hoped to avoid delivering food for just two — “Cooking for 2 is like cooking for 28,” Anderson gripes — the demand for dinners for duos has gotten the better of them. She guesses they charge about $30 per pair, provided they already have orders for a given evening and that the delivery isn’t too far out of the way.

Regular customers Elizabeth Bluemle and Josie Levitt, owners of the Flying Pig Bookstore in Shelburne, have already worked Dinner Belles’ deliveries into their weekly routine. “I got an email from a friend of mine who told me about them, and I looked on their website and was, like, ‘Ooh, we’re going to try this!’” says Levitt. “I think we’ve ordered one meal a week for three weeks.” And she plans to keep up the pace: “Their servings are so generous. Our first meal was the turkey tetrazzini, which was so fabulous, and I think we got six or seven servings out of [a four-person order].”

While Levitt and Bluemle stick to small helpings, those with extra-big appetites might find Dinner Belles’ portions a tad limited. On the other hand, the food is flavorful and extremely well executed. Last week’s turkey tamales, paired with a black-bean side dish, were better than most of the fare served at local Mexican eateries. The lemony turkey meatballs were tender and juicy, pairing well with a mix of wilted escarole and spinach.

The web-based ordering system is functional and easy to grasp. The Dinner Belles’ blog features two weeks’ worth of menus, which change daily. Last Wednesday, pork Wellington and roasted duck and sweet potato hash were the entrée choices. This week’s Wednesday menu lets customers pick between shepherd’s pie and deep-dish bacon-potato-onion torte. Aside from the omnipresent green salad, all the sides change, too.

“We try not to repeat things,” Anderson says. The sisters may make a few exceptions to the no-repeat rule, though: Classic comfort foods such as chicken pot pie could become usual suspects.

While the food isn’t processed, neither is it localvore or organic on a regular basis — because of the premium price attached to those labels, says Blanchard. “We buy as local as possible and as organic as possible when it’s comparably priced,” she says. “It’s healthy, clean food, no trans fats or things like that, but organic is very expensive. As a small business, it’s not conceivable for us to buy all organic products.”

For Blanchard, who does most of the shopping, it’s been tricky making the transition from European open-air markets to megastores such as Price Chopper that swath produce in shrink-wrap and Styrofoam. “[In France] you’re encouraged to see which one you like, palpate the goods, and see what’s going to be delectable by virtue of its outer appearance,” she reminisces.

Finding the best packaging for their final products hasn’t proved simple, either. For now, dishes are delivered in disposable oven- and- microwave-proof containers. “Aren’t they pretty?” Anderson jests. They’re not, and trying to put the plastic lids back on the leftovers is an exercise in frustration, but they do make the reheating easy.

Eventually, for both environmental and aesthetic reasons, the Belles hope to get regular customers on a dish-swap system. “We’d love to deliver a porcelain container, and the next time pick up the container,” Blanchard explains. “That would be a very nice option.”

So far, the sisters share the burden of deliveries. Ultimately, they say, they would love to open a little café and ditch that laborious side of their business. But there’s no denying that people like having good food delivered right to their door. “No matter how people are suffering financially, there’s always a need for services,” Anderson says.

And for now, the Dinner Belles are the only ones offering such a service in their five-town area. Blanchard and Anderson got the initial word out about their company the old-fashioned way: They handed out brochures at their kids’ schools. Just three weeks in, things are looking very good. On one Thursday evening, the sisters are cooking for 20 people. “We made $700 last week,” Blanchard says. “We’re thrilled.”

Apparently, so are their customers, who are combatting the fall chill with Dinner Belles’ soulful take on braises, roasts and stews. “It’s peasant food. Everybody loves it,” Blanchard opines. “It’s like heavenly baby food for adults.”

And the Belles hope that, if you hanker for a return to childhood but barely have time to put dinner on the table, you’ll give them a ring.