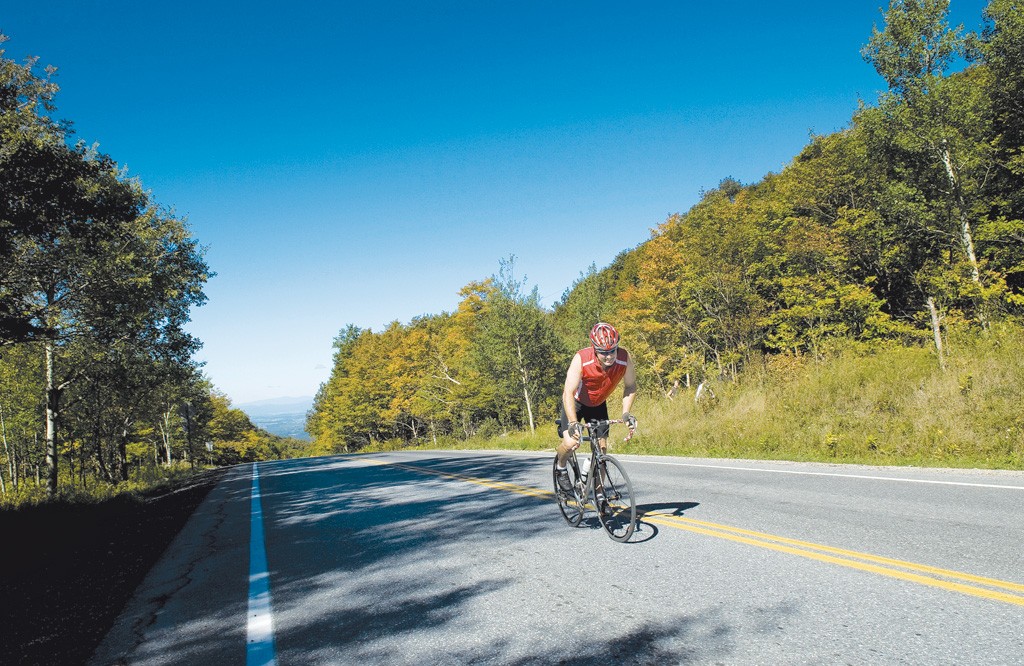 Vermont cyclists have a host of innovations to enjoy and anticipate in the peak pedaling season, which runs from roughly Memorial Day to Columbus Day. They'll also have to contend with many of the same dangers and limitations that have always hindered biking in the state.

With a mayor and a public works director committed to improving and expanding cycling options, Burlington appears to be setting the pace among Vermont localities in encouraging residents to get out and ride. City officials and partner groups are marshaling their efforts with a "Go for Gold" campaign intended to earn Burlington recognition as one of the best cycling cities in the country. Currently Vermont has silver status, a distinction granted by the Walk Friendly Communities Program, based on the quality of its walking and biking infrastructure.

As an infrastructural expression of that ambition, work will soon start on reconstructing wthe most heavily used portion of the lakefront bike path. In addition, Local Motion's bike ferry linking Burlington and Colchester with the Champlain Islands will operate seven days a week from mid-June to Labor Day, with weekend service starting May 24 and running until mid-October.

And who says cycling has to be sweaty and achy? Not the Burlington Bike Party, a puckish group that gathers in City Hall Park at 7:30 p.m. on the last Friday of each month through September. Serious about having fun on two wheels, these enthusiasts embark on a chatty, slow-paced, two-hour ride around town, with participants encouraged to wear costumes and make music. Each party has a different route and theme. On Friday, May 30, the theme is "flowers."

Despite these and other initiatives, Burlington cycling activists don't seem to be in a congratulatory mood. "Go for Gold," they caution, should be viewed as "a measure, not a goal," because the city will need to establish numerous improvements, particularly regarding safety, for many years to come.

Actual or perceived danger is the chief disincentive to cycling, and often to walking, notes the Burlington Walk/Bike Council, an all-volunteer policy advisory group. "Some of the most important corridors and routes in Burlington do not feel safe to ride for most people," the council declared in a recently adopted statement on "Go for Gold" priorities.

Closing gaps in the city's array of cycling paths would be an especially effective safety measure. Burlington has "isolated pockets of good biking infrastructure," observes Local Motion director Emily Boedecker. "But there's no real network. We've got to go from the dots and dashes of Morse code to a true broadband system."

The strong commitments to cycling voiced by Mayor Miro Weinberger and Public Works Chief Chapin Spencer (the previous director of Local Motion) suggest that "we've got the willingness in place and the right individuals in place," Boedecker adds. "But we need broad public support for it to actually happen."

Spencer doesn't disagree. "We have a decent foundation in place and some ambitious plans," he says, while acknowledging that the city faces tough challenges in becoming friendlier to bikers. "New England has narrow streets, and it's not easy to accommodate all uses comfortably," Spencer notes.

Our area has seen plenty of other developments of late — regarding not only cycling infrastructure but cycles themselves. Here's a sampling.

Last Saturday, Rutland celebrated the opening of a 5.1-mile mountain-biking route from the city's 300-acre Pine Hill Park to Proctor. It took nearly eight years to get the landowner permissions and to make the physical changes needed to complete the Carriage Trail, says Shelley Lutz, one of the coordinators of the volunteer-powered effort. Owing to the route's 500-foot gain in elevation, casual cyclists probably wouldn't enjoy a jaunt along these old logging roads. But there are scenic compensations, Lutz notes: a beaver swamp busy with wildlife and a reservoir suitable for dipping.

The Marble City hopes to add another, tamer trail in the next few years. The 10-foot-wide, paved Rutland Creek Path is planned to run three miles through the city along the East and Otter creeks. The first segment opened two years ago, with the second of five due to be completed this summer.

A long-planned bike path along the Barre-Montpelier Road has been slow to take shape, and a completion target date remains elusive, reports Nancy Schulz, director of the Vermont Bicycle and Pedestrian Coalition. But some progress has been occurring. Construction on part of the path could begin next year, Schulz says.

Cycle trail advocates who dream big should plan to take part in a June 22 tour starting at Morse Farm in East Montpelier. It's a fundraiser for the Cross Vermont Trail, an envisioned 90-mile route connecting towns in the north-central portion of the state, from Lake Champlain to the Connecticut River. About a third of the trail is complete and open to riders and skiers. Supporters describe the route along the Winooski and Wells rivers as a patchwork quilt that will knit together many different pieces.

Back in Burlington, a study is under way that examines converting North Avenue into a "complete street" — meaning redesigning it to better accommodate cyclists and pedestrians and to enhance motorists' safety. A similar assessment is expected to start soon on the downtown sections of North and South Winooski avenues, regarded by many urban riders as the most dangerous streets in Burlington.

Plans for the endlessly delayed Champlain Parkway still lack adequate amenities for pedestrians and cyclists, according to the Walk/Bike Council. The group adds in its recent statement on "Go for Gold" priorities that it expects such improvements to be formulated soon.

Several national companies organize cycling tours in various parts of Vermont. For a days-long ride with down-home roots, check out the offerings of Richmond-based POMG (Peace of Mind Guaranteed) and VBT (formerly Vermont Bicycle Touring), which still operates from offices in Bristol after 43 years in business.

Local Motion organizes a four-day "Vermontreal" trip from Burlington to Montréal starting May 29. It's priced as a fundraiser for Local Motion, with the $1,095-per-person cost covering three nights' lodging, some meals and transportation back to Burlington. The entry fee for the June 1 Tour de l'Île de Montréal is included, as well.

The 30th edition of the Tour de l'Île is the culmination of a weeklong biking festival called Go Bike Montréal. Starting May 25 with the 150- or 75-kilometer Metropolitan Challenge, the series of events includes the 20-K Tour la Nuit that starts at 8:15 p.m. on May 30.

What accounts for Montréal's status as, arguably, the best cycling city in North America? "It has been like a snowball rolling," says Joelle Sevigny, director of Vélo Québec Événements et Voyages. "It just kept getting bigger and bigger."

Fifteen regional chapters around the state have launched a coordinated drive to increase the membership of the Vermont Mountain Bike Association nearly fivefold this year, from 450 to 2,200 dues payers. The aim is to improve and expand the 600 miles of single-track trails available to riders on private, state and federal land, says association publicist Sarah Galbraith. Individuals will pay $49 a year and receive discount coupons for 40 shops, ski resorts and restaurants.

Mountain biking is growing in popularity, with Vermont emerging as a leading destination, Galbraith notes. "It makes you feel like a kid again," the Marshfield resident says in explaining why she sets off on rides of up to 18 miles on many evenings. "It's the way I let go of my workday."

Cohen will be proselytizing for cargo bikes, which, he argues, can substitute for a car for shopping and errands. Besides creating environmental disturbances, "the automobile is designed as a sensory-deprivation device," says Cohen, who works as a psychotherapist. "It's intended to restrict users' access to the eco-world."

Taking the pain out of elevation gain is also a motivating factor for Larry Gilbert, co-owner of ZoomBikes in Middlesex. Gilbert and Lauri Scharf sell electric cycles that they'll offer daily for three-hour test rides in the Montpelier-Moretown-Middlesex area starting June 3. The battery-powered bikes, which can operate for up to 30 miles per charge, have a maximum velocity of 20 mph but average about 10 mph for most riders because the pedals must be pushed for the motor to work. Zoom's cycles sell for $2,400 to $3,400.

Electric bikes "provide enough assistance to make it possible for lesser mortals to ride up hills," says Gilbert, 59. He sees Zoom's market as consisting mainly of aging cyclists such as himself — "people who want to keep riding but who just can't deal with the hills that are pretty much everywhere in Vermont."

The original print version of this article was headlined "Riding High"