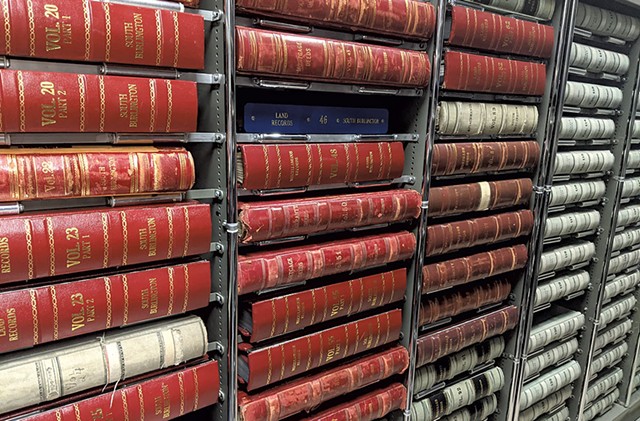 Burlington City Attorney Dan Richardson expected that the bill he requested would pass the legislature without issue.

H.551 was intended to ban language in some old property deeds that barred people from buying houses based on their skin color or religion. These so-called "restrictive covenants" have been legally unenforceable for decades, but they remain a painful reminder of the past. Under Richardson's proposal, homeowners would be able to disavow the language by attaching a form to their municipal property records.

"This is simply an evil device that we, as a society, do not wish to have in any way, shape or form continue," he told members of a House committee in early March. Lawmakers were sold: The bill passed the chamber overwhelmingly last month.

But over in the Senate, the bill is facing an unexpected challenge. Mark Hughes, executive director of the Vermont Racial Justice Alliance, recently told the Senate Judiciary Committee the bill doesn't go far enough. He wants the covenants — which are written into obscure documents kept in land record vaults — to be recorded in a central database so that Vermont can better understand its history of discrimination.

Lawmakers who were supportive of the measure now say they're unsure of the best path forward. They've twice delayed a vote on the bill and were expected to take up a version on Wednesday, April 27, that would simply nullify the covenants without documenting them or allowing homeowners to "release" them from their deeds.

Finding a legislative remedy has gained more urgency in the George Floyd era of racial reckoning. tweet this

All involved agree the covenants should be addressed, but, with the legislature scheduled to adjourn in a few weeks, the question of how best to do that is far from resolved. Rep. Hal Colston (D-Winooski), a sponsor of the bill and one of the few legislators of color, lamented that the back-and-forth between advocates and lawmakers has held up what was meant to be a simple resolution to a long-standing wrong.

"This bill should be passed this session. It's long overdue," he said. "We should just continue to follow our conscience and do the right thing."

Restrictive covenants were used for decades. Most sought to ban Black people from living in certain neighborhoods, but the covenants also targeted Asian Americans, Jews and anyone who wasn't white. Along with redlining — a practice that began during the New Deal era of denying Black people access to federally backed home loans — restrictive covenants are evidence of the systemic racism that kept many Black people from accumulating generational wealth. The 1948 Supreme Court decision Shelley v. Kraemer rendered the covenants unenforceable, and the Fair Housing Act of 1968 prohibited housing discrimination in all 50 states. But the covenants are not expressly outlawed by Vermont statute.

The offensive restrictions can be upsetting when they're unearthed and often leave homeowners questioning what they can do to get rid of them. In 2006, residents of South Burlington's Mayfair Park development voted to file an updated set of covenants after discovering that the original deeds, dated 1940, said "no persons of any race other than the white race shall use or occupy any building or any lot." An exception was made for domestic servants.

The original set of covenants is still physically on the books — memorialized in a giant maroon-and-gold ledger at the city clerk's office — but the new set, filed in 2007, leaves out the offensive passages.

Finding a legislative remedy has gained more urgency in the George Floyd era of racial reckoning. Richardson, the Burlington city attorney, broached the topic with lawmakers last fall, about a year after the city created a Reparations Task Force to research the prevalence of restrictive covenants in the Queen City. Members of the task force will receive 1.75 million pages of the city's newly digitized property records this week and will soon discuss how to begin their work.

In its original form, H.551's goals were threefold. Beyond voiding the effect of any historical covenants, the bill aimed to "prohibit racially and religiously restrictive covenants from ever being used in Vermont again" and outlined a way to symbolically "remove" the language from old deeds while keeping the historical record intact. The latter would be accomplished by having homeowners file a certificate of release, essentially a cover letter stating that they relinquish the covenant. The language would remain in the deed, but the letter would nullify it. Unlike other property transactions, the process could be done without a lawyer or government fees.

Similar bills have been passed in Washington, Nevada and Virginia. Delaware, on the other hand, allows homeowners to request that restrictive covenants be redacted from the publicly available copy of their property deeds; the untouched original can only be revealed through a subpoena or court order. Maryland uses a similar approach.

Richardson said Vermonters can disavow covenants with a court order or by filing other legal documents, but he intended H.551 to provide a "very simple, very cheap" option.

Members of the Senate Judiciary Committee seemed ready to pass the bill until Hughes, the racial justice advocate, began raising concerns. Hughes, who is Black, noted that no other person of color had testified on the bill, and he called on legislators to delay a vote until more testimony could be taken. He also proposed that when restrictive covenants are found in a deed, town clerks should be required to send a copy to the Secretary of State's Office to record in a historical archive. Otherwise, Hughes said, there's no way to document how widespread the covenants were in Vermont.

Hughes also suggested that the bill allow one resident of a condominium development to file paperwork renouncing objectionable covenants on behalf of an entire condo association. And he wants a way to levy a civil penalty against anyone attempting to enforce an illegal covenant — a provision in other states' laws, such as Minnesota's.

"The bill should be passed this session. It's long overdue." Rep. Hal Colston tweet this

But instead of adding to the bill, lawmakers may water it down. This week, members of the Senate Judiciary Committee are expected to vote out a version that declares the covenants null and void but strikes any reference to the certificates of release championed by both Richardson and Hughes.

"You've convinced, I think, all of us that [this issue is] more complicated in certain ways than we had imagined," Sen. Phil Baruth (D/P-Chittenden) told Hughes during a committee meeting last week.

In a follow-up interview with Seven Days, committee chair Sen. Dick Sears (D-Bennington) said he found Hughes' recommendation for a central database compelling and that the idea could be revisited in the future. Sears said his aim in recasting the bill was to make clear that the covenants are null and void. But he also acknowledged there was a political dimension to the lawmakers' discussion.

Some senators had said they were concerned that the bill could pose problems for public figures. Because Vermont law only requires title searches to go back 40 years, a buyer may not discover a restrictive covenant, since many predate that time. Lawmakers feared that political opponents would dig up their property deeds and smear them for not "releasing" racist language they didn't know was there.

"While it might be a nice idea to have people file those releases, I'm afraid that many people won't pay for a title search going back 200 years," Sen. Jeanette White (D-Windham) told her colleagues last week. "My house is 180 years old. I can't pay for someone to go back and do that title search. I don't want it to be used against me."

There's precedent in Vermont for the senator's fears. In 1986, Americans learned that Supreme Court justice William Rehnquist's summer home in Greensboro had a covenant barring residency by "a member of the Hebrew race." Rehnquist bought the property in 1974, but he and the public didn't learn about the clause until his confirmation hearing for chief justice 12 years later. He ended up selling the property, then buying it back two days later, so he could record a new deed without the offensive language. Sen. Joe Benning (R-Caledonia) called such a scenario his "personal nightmare."

"It's the kind of thing that sets all of us up for a potential problem," he said in a committee meeting last week.

In a follow-up interview, Benning said he also worries that the bill could cause division between homeowners who opt to perform a complete title search and those who don't. Releasing the covenants using a form is a nice gesture but "not a necessary thing to have in state law," Benning said.

"What we're trying to do is declare as a society, 'We know that these things exist; we are officially declaring them as no longer state policy,' and that's really all that you needed to do," he said. "You didn't need to further complicate it by putting people against each other as to whether they should have something additional in their deed chain or not."

If debate continues, H.551 is unlikely to pass, since the legislature is expected to adjourn by mid-May. If the measure is endorsed by the Judiciary Committee and the full Senate, it would still need to be reconciled with the House version before going to the governor's desk.

Carl Lisman, a Burlington attorney who has practiced real estate law for 40 years, has asked lawmakers to hold off on H.551 until they can review another version being vetted by the Uniform Law Commission, a national organization that drafts statutes for adoption in all 50 states.

Lisman, the commission's immediate past president, said the group formed a restrictive covenant committee in 2019 and has proposed a consistent method to deal with the racist relics. The group is poised to adopt the language at its annual meeting in July.

Like Richardson's proposal, the uniform law would nullify the covenants and allow homeowners to file a document similar to a certificate of release. But it's more detailed and covers restrictive covenants targeting all protected classes, including sex and national origin. It also includes a how-to on releasing covenants from homeowner associations, much as Hughes has advocated.

"Frankly, it's better written, it's more internally consistent and, at the end of the day, they accomplish the same result," Lisman said.

Richardson isn't necessarily convinced. He thinks the uniform bill is more detailed and complicated than his proposal. And he said there's no guarantee the commission would approve its draft this summer.

Not that there's any rush. Hughes raised some important issues about the bill, Richardson said, and he's happy to take the time to wade through them in the next legislative session, if necessary. He hopes whatever bill ends up passing has unanimous support.

"It's a really terrible legacy of our history," he said. "I would want any solution to be reflective of a common understanding that we're trying to change these things for the better."