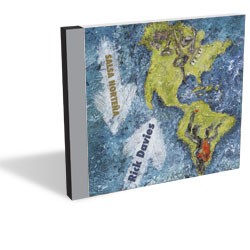 Trombonist Rick Davies is among the region’s most accomplished Latin jazz players. But before he relocated to the North Country a decade ago to join the faculty at SUNY Plattsburgh, he plied his trade for years in NYC and the Caribbean, and shared stages with Latin jazz giants from Tito Puente to Santiago Ceron. With Wyclef Jean, Davies has performed for President Bill Clinton and appeared in an episode of VH1’s “Storytellers.” Davies’ accolades extend into pop, as well: He’s recorded with Blondie and Michael Jackson and worked with the likes of Gloria Gaynor. In short, dude’s legit.

The record boasts eight original compositions from Davies, written in tribute to, and in the style of, salsa dura, a branch of the genre popularized in NYC in the 1970s that emphasizes propulsive percussion grooves over horn and vocal melodies. Recorded in Montréal and mastered by Lane Gibson in Charlotte, Salsa Norteña plays like a street festival in Washington Heights. The bright, colorful and irresistible collection of Latin grooves is delicately arranged and expertly, vibrantly executed with immaculate taste.

From the opening pulse of “Baile de Amor” through the rumbling closer “Son, Son, Son,” Davies has crafted an album that deserves a place in the collections of discerning Latin-jazz aficionados anywhere. Without exception, the performances here are stellar. Davies in particular displays a beautifully expressive tone that both accents Ross’ sandy croon and proves a worthy foil to Vega’s explosive trumpet. Alternating tunes, bassists Edward Maldonado and Rivers compose a formidable rhythm section alongside Jonathan Maldonado and Neville “Pichi” Ainsley on conga. Cleary is subtly magnificent on piano, while saxophonist Alex Stewart and trumpeter Eduardo Sanchez round out a terrific horn section.

Latin jazz may not get as much play here as do other jazz idioms. But Davies’ latest is proof that quality trumps quantity. Salsa Norteña is a masterful album and a perfect soundtrack to the steamy summer nights that lie ahead.