Rick and the Ramblers, Riding My Guitar 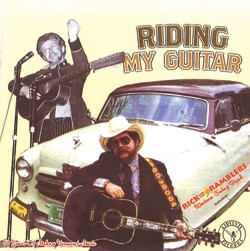 If you haven’t yet had a chance to read Riding My Guitar, the recently released biography of Rick Norcross penned by Vermont author Stephen Russell Payne, here’s a condensed version: the accompanying album of the same name recorded by Norcross’ band, Rick and the Ramblers. On the title cut in particular, the longtime local songwriter recounts the highlights of his 50 years playing music.

In typical, gently swinging fashion, Norcross takes us from his humble beginnings in East Hardwick in 1963 to his time in Europe palling around with Paul Simon to his stint as a coffee-shop owner and rock photographer in Florida and back again to the Green Mountains. And here he’s become something of a local legend.

Norcross can’t capture as much detail and nuance in his autobiographical five-and-a-half-minute ditty as does Payne over 230 pages. But the song — and, in its own subtle way, the album as a whole — represents an absorbing and charming look at the life and times of one of Vermont’s musical treasures.

Perhaps what’s most remarkable about Riding My Guitar (the album) is that the title track is really the only personal retrospective Norcross offers among the album’s 12 songs. Given the scope of his career, he could certainly be excused the vanity of looking back on a life well — and fascinatingly — lived. That he chooses not to is a testament to his own humility and to the enduring quality of his band and its music.

And, make no mistake, this is great music.

Vermont may not be associated with Western swing. But if it ever is, Rick Norcross will be a big reason why. Easy-riding originals such as the cheeky opener “The Way We’ve Always Done It” and the poignant “Take Your Time” — as always, deftly arranged by longtime collaborator Charlie MacFadyen — coexist naturally alongside genre staples such as “Wurlitzer Prize” and “Full Moon Full of Love.” Whether crooning in his warm, unadorned baritone or ceding vocal duties to the likes of Taryn Noelle and Dave Rowell, Norcross’ songs exude a winsome charm and sage modesty that makes his music not only likable and comfortingly familiar but timeless.

Riding My Guitar by Rick and the Ramblers is available at

rickandtheramblers.com. The band plays as part of the Northfield Labor Day Celebration in Northfield on Sunday, September 1.