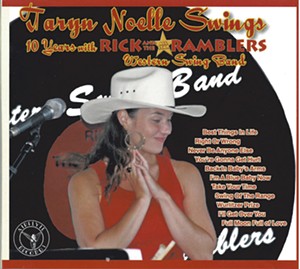 With a 55-year career as a performer, Burlington-based Rick Norcross has played under the spotlights from Stowe to London, hung with Paul Simon, popped up on the Travel Channel and even been the subject of a biography. On his band's latest release, however, he puts vocalist Taryn Noelle's name on the marquee. Taryn Noelle Swings features 11 tracks of Noelle's classic, beautiful vocal performances as she takes the band's reins.

This sort-of "best of" album kicks off fittingly with "The Best Things in Life," a song from the 1927 Broadway show Good News. (It was popularized for a new generation when rogue prairie dogs sang the song while robbing the set of "The Muppet Show.") Behind a gorgeous fiddle- and piano-heavy arrangement, Noelle's voice shines like the moonbeams she sings about.

The album rolls seamlessly into "Right or Wrong," a '30s jazz standard that the band infuses with its signature swing, adding a thrilling instrumental duel in the middle. Doug Reid leads off with a lilting fiddle solo, soon followed by lead guitarist Dono Shabner, before multi-instrumentalist Charlie MacFadyen enters the fray, each player essentially taking a quick bow. Noelle's timeless voice and the band's classic Western swing style lend this album a lovely sense of nostalgia. When they take on Patsy Cline's "Back in Baby's Arms" and Ricky Nelson's "There'll Never Be Anyone Else But You," the authenticity of the playing captures the magic of the original compositions even though the arrangements are new.

Norcross is known in the folk and Western swing genres for his songwriting. Only two of his compositions appear on this record — "Take Your Time" and "You're Gonna Get Hurt" — but his distinctive wit and oddball humor come through as he duets with Noelle. It might be a little odd to go from a tune with a lyric like "It'll be the hurt-iest hurt that you ever had" to a song like Waylon Jennings' heartbroken "Wurlitzer Prize." But the band's charm and expertise carry them over any bumps in the road.

Since the album is intended as a showcase of Noelle's prowess, it's fitting that the last track, "Full Moon Full of Love," is a sort of mission statement. Vermonter and Asleep at the Wheel cofounder LeRoy Preston wrote the song, and Noelle makes it her own. She and Norcross harmonize perfectly on a tune that conjures slow dancing under a starry night.

Taryn Noelle Swings marks another impressive outing for the All-Star Ramblers as well as a deserving spotlight on one of Vermont's finest vocalists.

The best way to experience the band's music is to catch it live, though some of its albums, including this one, are available at rickandtheramblers.com. This Friday, July 6, the All-Star Ramblers will pull up to the Shelburne Museum in their green '57 Flxible Starliner bus, aka "the Pickle."