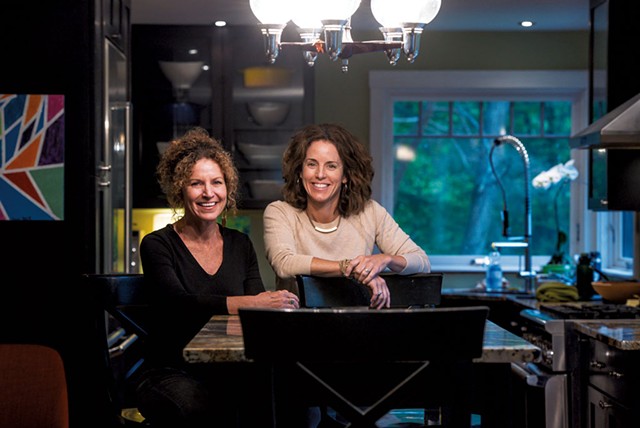 After 14 years of living in their1840s farmhouse in Starksboro, Susan Thompson's family decided on a major renovation. She, her husband and their 9-year-old daughter had to pack up the entire house and relocate to a 1,000-square-foot garage apartment for about six months. As the May 18 move-out deadline approached, Thompson had no idea where to start.

So she called Claire Mahoney and Marlene Simson, owners of Richmond-based Moov Home & Moving Consultants. The women came to Thompson's home and went through it room by room, helping her come up with a plan. Their organizing process allowed Thompson to purge unneeded items before putting the rest of her home's contents into storage.

"I'm not a pack rat, but I have a lot of stuff," she says. "I was just super overwhelmed."

Even in the best of circumstances, moving is chaotic and stressful. It can be emotional to leave an old life and embark on a new one. It's time-consuming for someone with a job and kids with soccer games and dozens of other tasks. Most people can't just drop everything else to accommodate the transition. That's when a client might call Moov and say, "I need to get my life back on Monday," Mahoney says.

Established in September 2018, Moov is a hybrid business: part packing and unpacking service, part house-staging operation, part interior decorator, part professional organizer, and — unofficially, of course — part therapy. Mahoney and Simson will help clients clear out closets and downsize. They'll pick paint colors to spruce up a house for sale or brighten a new living room. They'll even manage contractors such as plumbers and electricians.

Some moving companies offer packing and unpacking, but they won't usually organize in the process or put a new home together the way a customer wants it.

Moov does that. Mahoney and Simson transfer every last utensil into a kitchen drawer. They hang shower curtains. They place laundry detergent near the washing machine. They make the beds.

"We literally fold the towels. We put the towels in the linen closet," Simson explains. "When [the clients] walk in, they are box-free and can eat at their table if they like."

When Thompson and her family moved into their temporary apartment, Mahoney and Simson created cozy bedrooms out of the open floor plan to make it feel like home, she says. They even returned to the farmhouse to grab a few colorful items for her daughter's nook.

"They had this amazing vision for how the bedroom would be set up," Thompson recalls. "They really have the skills — the way they pair things and place things and arrange things ... They sprung into action."

Their website calls them consultants, but Mahoney and Simson consider themselves "move managers." Its name notwithstanding, though, there is one thing Moov will not do: "We're not movers," Mahoney clarifies.

She and Simson might shimmy a credenza into its designated spot in a dining room, but they won't load furniture onto a truck. They'll let movers pack a 52-inch TV and get it safely to its new quarters.

"They are strong guys who are coming to lift baby grands," Mahoney says.

Mahoney and Simson, both Richmond residents, had completely different careers when they met as neighbors with kids in the same school. Mahoney grew up in South Carolina and spent 20 years in education, first as a teacher and then in school management. She came north to New Hampshire and ultimately made "a lifestyle move" to Richmond when her husband got a job in Vermont. She became the manager of the private Bellwether School in Williston.

Simson, a Shoreham native, went to nursing school in Washington, D.C., and became a psychiatric nurse. She worked in hospitals from Boston to California before returning to Vermont to do home health care. After getting a bit burned out on that field, she jumped from clothing store ownership to pharmaceutical sales to working in the design center at the Ethan Allen furniture store in Shelburne. 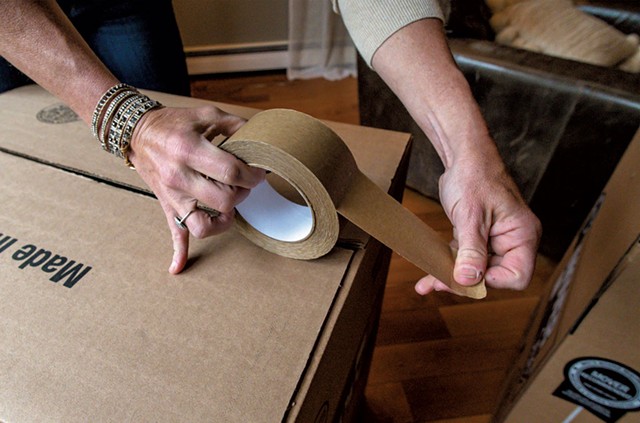 There, Simson realized she had a knack for interior decorating. In 2017, she left to start her own decorating business, called Pure Living Interiors, and moved with her husband and two daughters to Richmond.

One day, she and Mahoney were talking in the school parking lot when Mahoney mentioned some friends in South Carolina who had started a moving-assistance business and were "killing it." Mahoney suggested that Simson try that line of work.

Simson balked at doing it on her own, and finally Mahoney agreed they should launch Moov together.

The women have no inventory, no overhead, not even an office. To see clients, they carpool from Richmond's city park, with Simson driving and Mahoney scheduling with clients on the phone. Though they travel around the state, their primary focus is on Chittenden, Addison and Washington counties.

Companies like Moov exist elsewhere, particularly in urban areas. Many such services have carved out a niche in the senior housing market, focused on clients who are downsizing and transitioning to assisted living facilities. Moov offers that, as well.

Simson merged her interiors business with Moov. Their first project was a decorating job that's still ongoing. For the client — a couple who lives in Taiwan and purchased a second home in Waitsfield — Simson and Mahoney are outfitting the place from top to bottom, artwork to carpeting.

The women have had about two dozen clients since launching last fall. Often, Moov's services overlap. When the women unpack a family after a move, they might also design the layout of their new rooms. When they stage a client's home before a move, organizing and purging excess stuff is a big part of it.

Mahoney and Simson each charge $50 an hour for Moov's services, or $100 per hour if they do a job together. They'll take on projects large or small, working within a client's stated budget. Recently, one young mother of a toddler called Moov because toys and clutter had overrun her home; she hoped the team could restore her sanity. For a few hours' work, she paid $200.

"We did her bookcases and gave her some ideas," Simson says. "Sometimes we're just eyes, and they pay us to come for an hour and a half" and offer advice.

For Moov's owners, packing skills are less important than interpersonal ones. They need to build rapport with clients, gaining their trust before rummaging through closets and rearranging furniture.

Each successful relocation means easing a client's stress. Says Mahoney, "There's some level of satisfaction in making it all come together."