During a brief preamble to a recent mushroom walk at Shelburne Farms, workshop leader Ari Rockland-Miller asked each person to introduce themselves and share why they had signed up. Many in the group chuckled and nodded in agreement when Vincent Miller (no relation) of Williston said, "I've always been interested in mushrooming, but I don't want to die."

Rockland-Miller, 35, said he hoped to help the 14 participants hunt for edible mushrooms "safely and fruitfully."

Over the last 11 years, he and his wife, Jenna Antonino DiMare, 34, have given more than 200 workshops and presentations through the Mushroom Forager, a small educational project they run out of their Richmond home. They aim to demystify and simplify the search for edible wild fungi and, yes, help avoid death.

"The vast majority of mushrooms are neither deadly nor delicious." Ari Rockland-Miller tweet this

Comprehensive field guides can be informative but also "overwhelming," Rockland-Miller noted. The Mushroom Forager's ForageCast cards list seasonal and regional subsets of edible fungi. Each mushroom description includes a color drawing, the common and scientific names, where the species is most often found, and its culinary value.

"It helps you learn when certain mushrooms are in season and where to look, a very productive way to forage," Rockland-Miller said.

ForageCast cards are handy cheat sheets on what you really need to know: the SparkNotes of mushroom foraging 101.

Rockland-Miller also handed out some recent fungi finds, including a bright red-orange lobster mushroom, or Hypomyces lactifluorum. It is as edible as its namesake and is a parasitic fungus that feeds on other mushrooms, he explained. 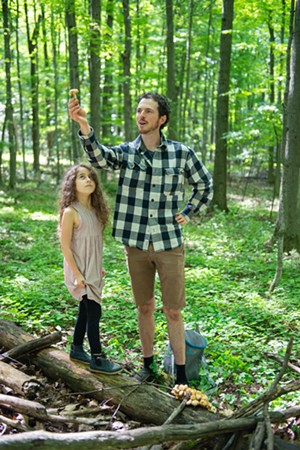 A nonedible bitter bolete made its way around the circle. While related to the prized porcini, or Boletus cf. edulis in North America, the bitter bolete had a brown netlike pattern on the upper stem, not the white netting of porcini. "It's not poisonous, but it's extremely bitter. It makes your tongue feel awful," Rockland-Miller explained.

"The vast majority of mushrooms are neither deadly nor delicious," he continued. However, Rockland-Miller cautioned, there are mushrooms in the Northeast that can make you very sick, and a handful that can definitely kill you.

Rockland-Miller then shared a story with the group about a man who emailed him regarding chanterelle identification. The genus Cantharellus includes golden-orange mushrooms that have a poisonous look-alike called Omphalotus illudens, or, commonly, jack-o'-lantern. The photos were not conclusive, so Rockland-Miller advised against eating them.

A week or so later, the man emailed again to say he had just eaten delicious chanterelles. Rockland-Miller asked whether he was sure they were edible. Shortly thereafter, the man sent a brief follow-up: "I guess they weren't. I'm vomiting right now."

"99.9 percent sure is not enough," Rockland-Miller emphasized. "You need to be 100 percent sure."

The roots of the Mushroom Forager harken back to Rockland-Miller's childhood.

In a phone conversation a few days after the Shelburne event, he recalled a vivid memory from when he was 10 years old: He found a hen of the woods mushroom, or Grifola frondosa, growing at the base of an oak tree on a neighbor's driveway. "I was just really curious, like, Is this really a hen of the woods? Is it edible?"

His mother bought him the authoritative National Audubon Society Field Guide to North American Mushrooms, which is dense with information. Young Ari reluctantly put his mushroom foraging on hold.

"I think any field guide as a starting point can be confusing to navigate. There's so much content, and what you really want to eat is just a fraction of that," Rockland-Miller said. "I didn't have any mentors. I didn't have anyone to teach me."

Rockland-Miller was finally able to feed his interest in fungi when he started working in 2009 at Cornell University in Ithaca, N.Y., managing a forest-based nut, mushroom and fruit farm and a mushroom research project.

"I just became really obsessed with mushrooms, both wild and cultivated," he said. He and Antonino DiMare started a blog in 2010 to share his learning journey and enthusiasm. When their readers asked for workshops, Rockland-Miller said he was reminded of his own craving for that kind of resource, so the pair started offering them later that year. 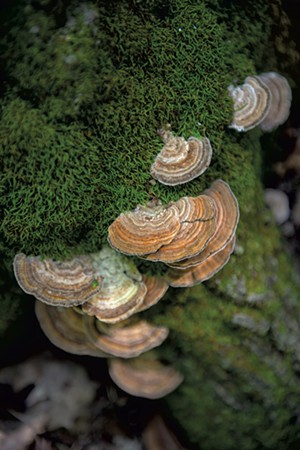 While he generally takes the lead role in teaching and writing for the blog, Antonino DiMare shoots most of the photographs, does workshop planning and is the chief mushroom cook.

The two grew up in the Pioneer Valley of western Massachusetts and met in high school. Both love the natural world and built environment-related careers.

Antonino DiMare holds a master's degree in landscape architecture and is the executive director of the nonprofit Vermont Green Building Network. Rockland-Miller graduated from Vermont Law School and works in land use policy and farmland conservation for the Vermont Agency of Agriculture, Food and Markets.

Through the Mushroom Forager, the couple shares their deep appreciation of nature with others. "It is our labor of love," Antonino DiMare said by phone.

"One of the amazing things about mushroom hunting is that not only are you on this fantastic treasure hunt in the forest that can potentially result in delicious ingredients for your dinner that evening," Antonino DiMare said, "but it really does open your eyes to seeing the forest in a new way."

To forage successfully and safely, one must be able to identify tree species and follow other clues in nature. For example, Antonino DiMare said, "If there's a certain kind of moss or the landscape is wet, I might think of black trumpets," she said, referring to Craterellus cornucopioides.

On the cautionary side, her husband explained that although chicken of the woods is normally edible, it should be avoided if found on hemlock trees and other conifers. Those are a different species of Laetiporus that can cause serious stomach upset.

The couple's two daughters — Eliana, 7, and Noemi, 2 — have grown up in the woods, and the eldest has already developed a keen naturalist's eye. "Eliana can be very helpful during some of our forays to run ahead and flag different, interesting specimens to highlight in the course," Antonino DiMare said.

The girls love to eat mushrooms, too. "They kind of lay claim on all of them," she said with a laugh. "Ari and I might not get to eat that prime porcini that we brought home. They gobble them all up."

For safety and to maximize the nutritional benefits, the couple cooks all foraged mushrooms but the most pristine porcini specimens. Antonino DiMare said she likes to roast oyster mushrooms (Pleurotus ostreatus) at 400 degrees, tossed with just olive oil, herbs, salt and a little minced garlic to avoid overpowering their delicate flavor. She adds porcini to braises and risottos and pairs chanterelles with eggs in omelettes, quiches and frittatas.

Another lesser-known favorite is lion's mane, a name that some foragers use for several species of Hericium with a shaggy appearance. Lion's mane tastes best seared in a really hot cast-iron pan until "almost toasted," Antonino DiMare said, and it makes an excellent seafood substitute in a mock crab cake. 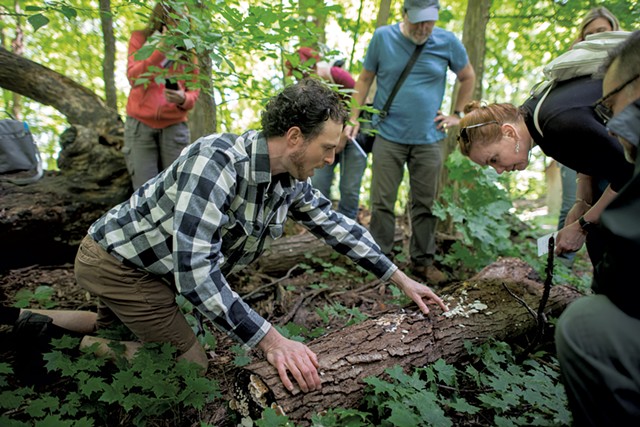 She often uses hen of the woods — also called maitake — as a base for soup. "It has an incredible umami flavor," she said. "Even just thinking about hen of the woods makes me salivate a little bit."

In a typical year, the Mushroom Forager offers about two dozen public and private workshops from May through the beginning of October. The workshops provide more than fungi identification education; they're an opportunity to talk about foraging etiquette and ethics, a topic raised early in the Shelburne foray.

In response to a question about etiquette, Rockland-Miller said, "Don't ask foragers their spots." As for ethics, he listed off a few basic guidelines: Never take more than half a patch and, ideally, less. Never forage on private land without asking for permission. If on public land, such as a state park, check for any rules about foraging. Try to pick larger, more mature mushrooms that have already dropped their spores to ensure future harvests.

The Shelburne workshop turned up disappointingly little in the way of edible mushrooms but much in the way of education. The group bushwhacked through sugarbush sap lines, knelt down to turn over logs and handed a steady stream of mushrooms to Rockland-Miller for identification.

A downed log revealed small pearls that were most likely prepubescent oyster mushrooms; they were too young to harvest or identify with 100 percent certainty.

"You'd have to come back to see them when they are larger — and smell one," Rockland-Miller said, explaining that oyster mushrooms have a distinctive anise or licorice aroma.

The group found fungi at the other end of the life cycle, too: a ragged, floppy cluster of overmature oyster mushrooms on a sugar maple.

The most exciting discovery was the deadliest: a luminously white destroying angel, or Amanita bisporigera. That mushroom is in the genus responsible for most mushroom-related deaths worldwide.

Everyone gathered around in fascination, and Rockland-Miller recounted how he had once received an email from a novelist seeking a detailed blow-by-blow account of how someone might die from eating one.

Learn more at themushroomforager.com. Shelburne Farms allows foraging only as part of its organized programs.

The original print version of this article was headlined "Mushroom Mastery"