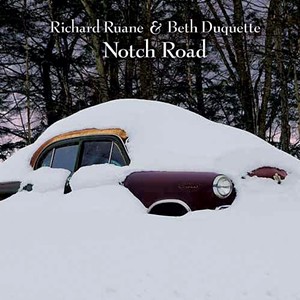 "When you look at me, do you see a future or a chain?"

That is no simple question to ask a lover. You can imagine everything going still as two people suddenly grapple with such a behemoth between them, two hearts trying to find each other through all the bullshit life can bring.

Such is the power of Richard Ruane and Beth Duquette's new record, Notch Road. The love songs are never simple. The anecdotes are far from cliché. And when the album asks questions such as the one quoted above from "Back With Rosemarie," they are the morally complicated yearnings of adulthood, lined with equal parts regret and weathered hope.

Ruane and Duquette first made local waves with trio Bread and Bones, earning accolades for their traditionally based folk music. After the Ripton band's 2011 album Could Have Been a Dream, it trimmed down to a duo. Notch Road marks the couple's debut, but it has all the confidence and mastery a longtime listener might expect. The songwriting is heavy with experience.

"Ellie Brown" is a Vermont-centric paean to heartbreak. From Windham through Rutland counties, town after town is name-checked over a classic folk arrangement. The towns appear in Ruane's car window as he passes by and thinks about a long-lost love. "But only now and then," he clarifies, a mournful note in his voice as he learns to let that old love go.

The album is not all doom and gloom. Ruane and Duquette have a quirky side, too. The jaunty "I Spy" takes a look at love and courting through the lens of Seven Days' infamous section of the same name. Over Ruane's clear, assured acoustic guitar, Duquette waxes philosophic about dating in the 21st century. "You seem pretty safe, and so am I," she sings. "Let me treat you to a coffee and some pie."

The duo takes on a traditional tune in "Harbour of Typee," originally performed by Ewan MacColl, A.L. Lloyd and Peggy Seeger for a 1962 documentary called Whaler Out of New Bedford. A gothic dread hangs over Ruane's arrangement, and his and Duquette's voices create a vivid picture of frozen ropes, freezing harbors and dreams of southern seas.

The original songs, mostly penned by Ruane, more than hold up, but the most impressive thing about this record is its versatility. Both singers have engaging voices, the songs never linger too long, and the writing has true character. For those who have already been listening to the duo, none of that will come as a surprise — though these are arguably the strongest tunes they've written to date.

Notch Road is available on iTunes and CD Baby, and you can also buy it at ruaneduquette.com. The couple will play tunes from the album, and more, on Saturday, July 21, at the Den at Harry's Hardware in Cabot.