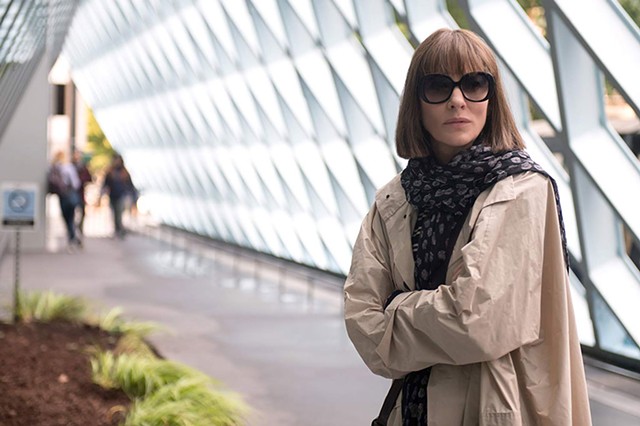 Certain literary formats don't translate well to the screen. Maria Semple's best-selling 2012 novel Where'd You Go, Bernadette tells the story of one woman's midlife crisis primarily through "found" materials such as emails, reports and memos. At first glance, director Richard Linklater (Boyhood, Before Sunrise) might seem like a good fit for Semple's delicate combination of absurdist comedy with dead-serious concerns. But somewhere along the line, the adaptation process derailed. Except as a showcase for Cate Blanchett's turn as the title character, the film version of Bernadette is a lost cause.

The novel opens with Bernadette Fox already missing; as her teenage daughter, Bee (Emma Nelson), tries to figure out where she went, the reader gradually learns who she was: an affluent Seattle stay-at-home mom with a husband (Billy Crudup) at Microsoft; a shut-in dependent on a virtual assistant; a grouch, a snob, a misanthrope, a mess.

But in her life before Seattle, Bernadette was someone else — a precocious icon of the architecture world and a MacArthur fellow. When she gives her family the slip, just before Christmas, it's actually the second big vanishing act of her life.

Blanchett plays Bernadette big; there's a touch of Katharine Hepburn in her haughty disdain for the status-grubbing moms at her daughter's school. She's never less than compelling, even when she's being awful, and her relationship with Bee is consistently touching.

But, with the exception of Bee, nobody in Bernadette's world seems capable of being a foil to her. The screenplay has taken her colorful, highly biased version of events (as expressed in emails to her assistant) and transformed it into a straight-faced narrative. Somehow this results in scene after scene in which Blanchett swans around delivering put-downs while the other actors stare into space looking like they wish they were elsewhere. Kristen Wiig and Laurence Fishburne make slight impressions, but everyone else just seems dazed and confused.

Is the problem the thinness of the novel's supporting characters or Linklater's failure to give the actors adequate direction? Hard to say. But, the more Bernadette overshadows everybody else, the more the screenplay overexplains her problems, nudging us to forgive and love her when we should be doing both of our own accord. The scenes in which her husband learns to appreciate her feel interminable.

Linklater's uncharacteristic heavy-handedness here is unfortunate, because special pleading softens the story's impact. The simple lesson of the book is that, without an outlet for her need to design and build things, Bernadette becomes a "menace to society," as she puts it. Generations of women chose between art and family; Semple posits that mental health is sometimes dependent on finding ways to choose both.

At its best, the novel is a joyful and refreshingly non-romanticized portrait of the artist as an eccentric middle-aged mom. At its worst, it's strenuously wacky and confusingly structured. The movie exacerbates those structural problems; by the time Bernadette disappears, there's virtually no mystery about where she went, rendering the last act more chaotic than suspenseful.

Normally so skilled at capturing everyday interactions, Linklater never finds a comic rhythm here. Perhaps Semple's blend of archness and earnestness is anathema to his more naturalistic style, or perhaps the story simply doesn't work out of its native epistolary format.

The sweet mother-daughter chemistry between Blanchett and Nelson could be enough to redeem Bernadette as a feel-good at-home watch. But viewers looking for the qualities that made the novel a huge smash may wonder where they went.

The original print version of this article was headlined "Where'd You Go, Bernadette"