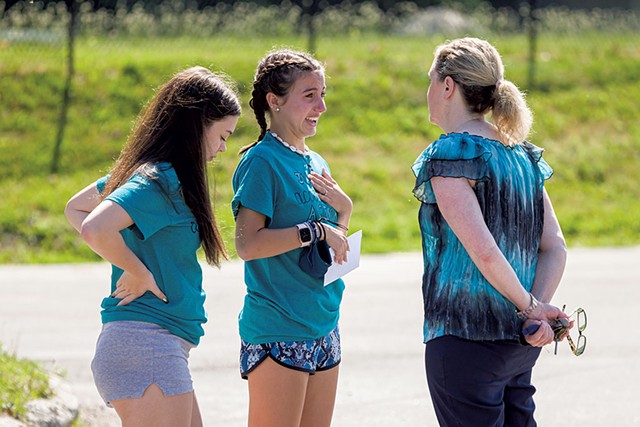 In June, Cindy Morgan stood beside her daughter, Samantha, outside Rice Memorial High School in South Burlington, as she and several other students criticized school leaders for mishandling their reports of sexual misconduct.

Morgan watched as the principal of the private Catholic school, Lisa Lorenz, walked over and embraced two of the protest's student leaders.

Later, she saw the principal's written responses to the protest, issued first to inquiring news outlets and, days later, to the student body. Rice, Lorenz maintained, had properly investigated all reports.

"While Rice followed all the policies and procedures required when conducting an investigation involving minors," one of Lorenz's statements read, "it can often leave one party dissatisfied with outcomes."

An independent review of Samantha's case, Morgan knew, had found numerous failures in Rice's response to her daughter's report that a classmate had groped her in a school stairwell in 2017.

The school hadn't followed through on basic aspects of required anti-harassment policies, the 2019 review found. And the senior administrator who had investigated Samantha's report did not apply the correct "standard of proof" when weighing the evidence — because he didn't even understand the concept, according to the confidential written findings, which Morgan provided to Seven Days.

To the affected students and families, Lorenz's public stance continued what they say has been a persistent unwillingness by the school and the Roman Catholic Diocese of Burlington to acknowledge shortcomings in Rice's responses to sexual misconduct and to engage openly with the subject.

"It just felt not very sensitive," said Hannah Sheppard, a recent Rice graduate who felt unsupported by the school after reporting off-campus misconduct. Lorenz, Sheppard said, "wanted the [school's] image to be protected."

Lorenz has declined several interview requests since June. By email, she maintained that her earlier public assertions that Rice has "followed all the policies and procedures" were technically accurate.

"I went through hell in high school. The administration did nothing to help me." Anonymous former Rice Student tweet this

The diocese did not make the principal's direct supervisor, Bishop Christopher Coyne, available for an interview. In a statement, however, Coyne acknowledged errors in an unspecified investigation with the same basic facts as the Morgan one and said the problems have been corrected. Until the June protest, the bishop added, he hadn't received any complaints about Rice's handling of sexual misconduct since he assumed direct supervision of the high school in late 2019.

State law requires all schools, including independent schools such as Rice, to adopt minimum policies that define sexual harassment and to investigate student reports fairly. Schools must also notify students, families and staff of the policies each year and provide training to staff.

The law further outlines a right for a student who made a complaint to commission an independent review of the school's investigation.

Such reviews do not reinvestigate the original allegations but provide an "objective third party who reviews the sufficiency of the school's response," according to an Agency of Education document describing the process. The state maintains a list of qualified independent reviewers from which schools may choose.

Samantha Morgan made her initial complaint to a guidance counselor in 2017 after a classmate touched her in a stairwell. Then-associate principal Jim Abrams conducted an investigation and concluded that it was "plausible" the contact was, as the male student had claimed, accidental, according to the independent review. Abrams did not find that the male student had violated the school's harassment policy.

As part of closing out the investigation, Abrams was required by state law to notify the Morgans of their right to an independent review. He did not.

Cindy Morgan said she only learned of the option nearly two years later, through conversations with an official at the Agency of Education. By that time, she and several other parents and students had shared stories about their experiences reporting sexual misconduct allegations to the school and were pushing for changes.

Rice agreed to the review in September 2019 and hired Nell Coogan, a Burlington attorney with expertise in school and workplace investigations.

Coogan, who did not respond to a call for comment, submitted a 13-page report that found a variety of problems with Rice's response. The report was based on a review of all relevant documents, as well as interviews with Rice officials and the Morgan family.

During the 2017-18 school year, Rice still did not have a harassment policy compliant with state guidelines issued in 2015, Coogan found. Students weren't notified of the policy each year as required, nor was Rice able to prove that it had trained students or staff on such a policy before the 2019 school year.

As for the investigation itself, Coogan found that Abrams hadn't provided proper written notices to both parties at the beginning and end of his investigation, including the right to an independent review. More significantly, the school administrator struggled to weigh the students' differing accounts of the incident.

"It appears that Mr. Abrams did not assess the credibility of the statements and may not have understood the proper evidentiary standard," Coogan found.

She wrote that Abrams said in an interview that he was unaware of the principle of "standard of proof."

"The standard was not whether the touching was 'clearly intentional' but rather whether it was 'more likely than not' that the touching was intentional," Coogan wrote. She recommended that Rice provide training to all employees who may serve as harassment investigators.

Abrams, who is now an interim elementary school principal at a Catholic school in New York State, did not respond to questions submitted in writing per his request.

Rice forwarded Coogan's report to the Agency of Education, the diocese said. An agency spokesperson said it follows up on reports of noncompliance and takes "appropriate action," but it did not answer questions about any response to the Rice report specifically.

The agency denied a Seven Days records request for its communications with Rice related to compliance with harassment policies on the grounds that any records were "generated in the course of a professional conduct investigation," which are confidential unless the educator is publicly disciplined.

Rice now conducts yearly bullying, hazing and harassment training with school staff, Lorenz wrote in an email. In late August, she said, the school was scheduled to conduct an additional two-and-a-half-hour training session with a Rice alum and attorney, Kerin Stackpole.

Poor harassment investigations are just one piece of what some students and parents believe is a cultural problem at Rice regarding sexual misconduct. They have been pushing the school in recent years to embrace a more modern curriculum about consent and appropriate sexual behavior but have run up against the church's tenet that all premarital sexual activity is sinful. Meanwhile, the students who have been accused of misconduct have continued to play sports and win school-sanctioned accolades. 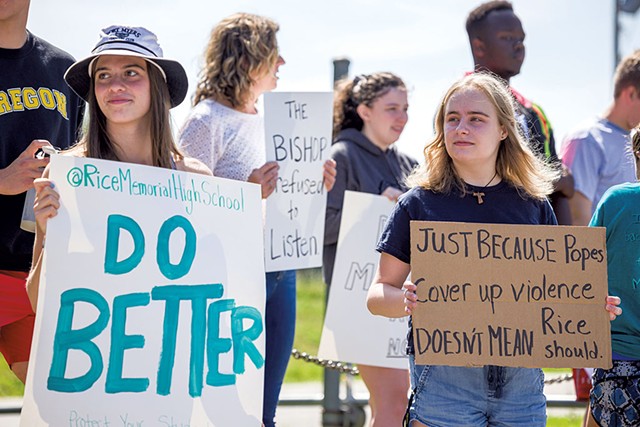 One recent Rice graduate, who did not attend the public protest in June, spoke to Seven Days about her high school experience. Seven Days is withholding her name and most details about what happened to her, to protect her privacy.

Several years ago, she was the victim in a documented case of sexual misconduct by a Rice peer whose offense involved social media.

The initial offense took place off campus, but the young woman and her mother asked school officials to ensure she was not in the same classes as the young man. On more than one occasion, the two were placed together, she said. The other student continued to participate in high-profile school activities while she said she endured public humiliation and further harassment.

"It was almost taboo, what happened to me," she said.

The young woman saw her case as a symptom of a cultural environment in the school community. She pushed for Rice to conduct more practical sexual education, which she said was basically absent from the curriculum. She recalled that one younger priest was open to the idea, but the proposal died when it reached senior administrators. Instead, Rice students reported undergoing a periodic Catholic practice called an "examination of conscience," during which they are compelled to reflect on whether they've viewed pornography or had sex.

Lorenz said the school is starting a program that pairs each student with a teacher-adviser who can support them. It's also planning "strategized messaging on teachings of the sanctity and dignity of the human person."

But to the young woman, that isn't enough. She's frustrated that Lorenz and other school officials were seemingly unreceptive to the various solutions she and others tried to put forward.

"I went through hell in high school. The administration did nothing to help me," she said. "I don't want someone else to go through that."

Rice's principal has also rebuffed entreaties to join the restorative justice process, as used by Vermont courts in cases of sexual misconduct.

A few years ago, several incidents involving Rice students were referred to the restorative justice program at the Williston Community Justice Center, executive director Cristalee McSweeney said. The process used by her center and others around the state brings together the person responsible for harm and as many so-called "impacted parties" as possible to develop a reparative agreement.

When cases involve students, McSweeney said, her office often contacts their school to see whether it can help "strengthen the response" and "make some effective change."

McSweeney said she reached out to Rice numerous times, but Lorenz never took or returned her calls. McSweeney eventually sent a letter to school officials that also went unanswered.

Rice is the only school in Chittenden County that has completely ignored her, McSweeney said. She called the experience "quite disappointing."

"If people are coming forward," McSweeney said, "it tells us that there's a problem, and the only way to fix it is to involve all the people who can be identified."

"I can't imagine why an academic institution wouldn't want to support that for their students," she added.

The original print version of this article was headlined "No Confession"