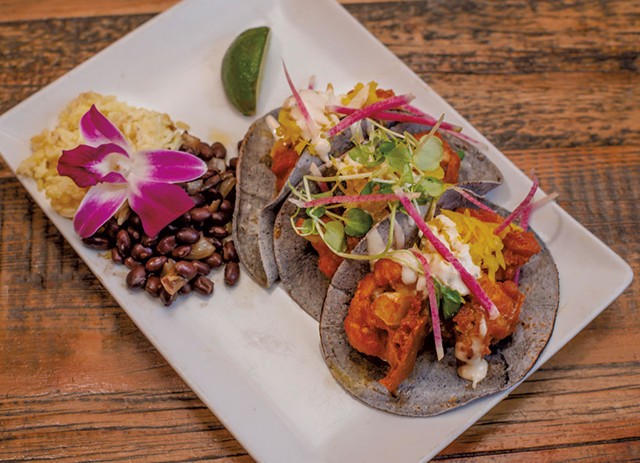 In the years since my parents died, I'm left with questions I wish I'd asked them. Today, for example, I have one for my father that I failed to pose in the half century I might have: Why is cauliflower your favorite food?

My father had a command of language and was a thoughtful observer of the world around him. His opinions were nuanced and considered. But he probably couldn't have answered that question.

I love cauliflower, too, and I can't tell you why. To quote Vermont rocker Grace Potter, "Love is love."

Cauliflower love washed over me the other night at Revolution Kitchen in Burlington, where I arrived with a plan for dinner. I was going to order stir-fried vegetables and tofu in Thai curry-coconut sauce, served with brown rice. Every time we make veggies and rice at our house, I ask my daughter, "Why don't we eat this every night? It's the best food around."

I was anticipating a stellar version at Revolution Kitchen. As a bonus, the meal would be a good fit for an article in Seven Days' Wellness Issue. Dietary advice comes and goes, but no one has ever said, "Cut back on vegetables!" In fact, most Americans fail to eat the recommended minimum of five servings of vegetables and fruit per day, according to Diane Imrie, director of nutrition services at University of Vermont Medical Center.

When my daughter and I got to Revolution Kitchen that recent snowy night, it was warm and bustling, drawing us in with a commingling of aromas — garlic, sesame, curry. Then the menu threw me a curveball: Buffalo cauliflower tacos with turmeric slaw and blue cheese crema. I ate this meal last spring during Vermont Restaurant Week. If I remember correctly, a friend and I wrestled with our forks over who got more of it.

Still, I asked our server whether she recommended the veggie stir-fry or the tacos. She said she's been eating the cauliflower tacos again and again "to get them out of my system." But she hasn't. She still wants more.

I ordered the tacos, a plate of three in blue corn tortillas. When they arrived, I delighted in the spicy florets, crispy from the fryer and brightened by the fermented cabbage. The cauliflower, more dry-rubbed than saucy, held its crunch and revealed the subtle but distinct earth-flowery taste I've favored since childhood.

A couple of days later, I called Debra Maisel, chef and co-owner of Revolution Kitchen, to talk with her about the dish. We also exchanged hunter jokes. (A hunter in the woods comes upon a beautiful woman. "Are you game?" he asks her. "Yes!" she answers. He shoots her.)

Maisel owns the vegetarian restaurant on Center Street with her husband of 39 years, Peter. The two share cooking duties with sous chef Jacqueline de Achaval, who is from Buenos Aires and has worked at Revolution Kitchen for six months.

Debra, 59, told me she conceived of the tacos last spring for Seven Days' annual restaurant week. The meal builds on an appetizer the restaurant served that was similar to that barroom staple, Buffalo chicken wings. Maisel's version showcased flash-fried cauliflower served with blue ranch crema, along with carrot and celery sticks.

"We put it in a taco shell, and we had fermented some cabbage," Debra said, recalling how the main dish came together. "And we had cabbage slaw and added some turmeric to the slaw for fun and to give it some color."

The colors of the dish — blue tortilla, white crema, firey cauliflower and yellow slaw — work together beautifully. "People went crazy for it," Maisel recalled. "They were just like, 'Oh my God!'" 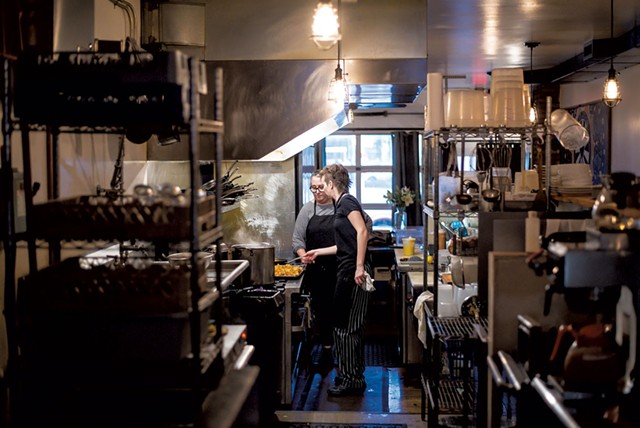 The tacos recently gained a permanent place on the menu, replacing Revolution Tacos, which had been a fixture since the Maisels opened their restaurant in the summer of 2013. These were filled with oyster mushrooms, sweet potatoes, guacamole and salsa.

"We got really tired of making them," Debra explained.

Over their four-decade marriage (following a first date at the now-defunct nightclub CBGB in New York City) and ownership of six restaurants, the Maisels continue to talk about food. The conversations often result in restaurant dishes.

"We go back and forth," Debra said. "It's really nice having a partner who is involved with food, because we bounce [ideas] off each other all the time ... And that's how we come up with things."

This practice originated at their first restaurant, Baba Roots, a macrobiotic restaurant the Maisels opened in Portland, Ore., in 1991.

"We were way before our time," Debra said. "Then we started to figure out that we needed to make good food, food that people would like to eat, and not think about what style they're going for. I want everyone who comes to Revolution Kitchen to just be someone who likes good food."

The cauliflower tacos, with their echo of wings, appeal to carnivores and vegetarians alike. Alive with color and flavor and served with a side of black beans and brown jasmine rice, the plate offers a vibrant riff on an old favorite.

As an aside, it could provide a health boost or two: Fermented foods help promote intestinal health, and turmeric is said to have anti-inflammatory properties. "Turmeric adds so much beautiful color," Maisel noted. "And who can't help but like a little anti-inflammatory in their food?"

My father would've gobbled up the tacos. Cauliflower was No. 1 on his food list, and a Hebrew National hot dog covered with sauerkraut was in his top five. Too late for him, but not for us, comes a meal that puts these culinary winners together.

Preheat oven to 350°F. Toss together above ingredients. Place on oiled baking pan and bake for 20 minutes. Turn the pan halfway through.

Blend all ingredients in blender.

Cut the cabbage into quarters and trim out the core. Slice into thin ribbons. Put in bowl and sprinkle with salt. Ferment in jars for three to 10 days. Add 1 teaspoon turmeric to finished product.