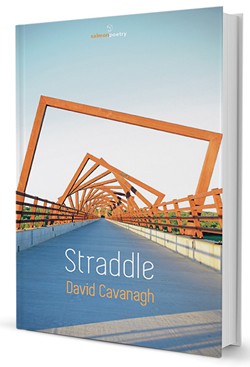 In "Adam's Curse," W.B. Yeats describes a paradox in the practice of making poems: "A line will take us hours maybe; / Yet if it does not seem a moment's thought, / Our stitching and unstitching has been naught."

I was reminded of this back-and-forth between formal eloquence and the illusion of expressive ease as I read two satisfying new books of poems, David Cavanagh's Straddle and Chard deNiord's Interstate. They make good companions, read side by side. Both poets are what Cavanagh calls "in-betweeners," given frequently to what deNiord calls "second thoughts."

Chard deNiord, who lives in Putney, has recently been named the new Vermont poet laureate, and Interstate is his fifth book of poems. David Cavanagh lives in Burlington; until his retirement in 2014, he was codirector of Johnston State College's external degree program for working students. Like a couple of his previous collections, his fourth book, Straddle, is published by an esteemed Irish press, Salmon Poetry.

Any strong poem is a "straddle" between different levels of awareness, an evocation of an "interstate."

Cavanagh's poetic territory is juxtapositions and combinations: young and old, woman and man, to and fro, one and all. He's a dual citizen of Canada and the United States — "Canuck ... Yankee," as he says in the poem "Can-Am." He's dual in his artistic temperament as well, incorporating French and English phrases, for instance, into a poem recalling boyhood baseball games:

through the cage of the catcher's mask,

moves by instinct as much as sight

toward the hard slider of the wild-ass

southpaw till it pops into his mitt

behind the flummoxed batter.

This poem, "Behind the Plate in Montreal, 1964," not only shifts languages in the boy's vantage but also swings between first-person and third-person narration in a way I've never seen done so nimbly:

I was the little anglais, though it seems a cool

tableau to me now, set there by memory,

which calls the pitches and queers

the outcomes. Mostly alone he was,

hardly anyone to talk to, afraid to try

French except for the franglais mishmash

of monosyllables the game gave him

to hide behind: Heads up, les gars, heads up.

Cavanagh can be funny and doleful at once, or tender and roguish. His syntax can coil, then snap, as in this first stanza of the poem "Now and Then":

the hollow and hillock of your belly and mound,

the sight stunned me,

god, so beautiful. Stuns me still.

In "Chimes," he immerses us so deep in sensory description that we may not notice right away that we are reading a single flexing sentence flowing in from the title, rendering those chimes that

hang cock-eyed on the porch for years,

still ring with each breeze, thin and off-key

at first until the ear adjusts and finds

loosed from the weathered pipes by the faithful

with ease given back to the ruffled air.

Here's a brief one, called "Customs," thematically and dramatically characteristic of Cavanagh's keen-bladed wit: "Anything to declare?" / asks the border guard. / Oh my. Where to begin?"

Chard deNiord is a border crosser of long habit, too. And, judging from many poems told from the vantage of a car, he probably spends a lot of time driving between his home in southern Vermont and his teaching job at Providence College in Rhode Island. In the poems where his narrator is not in a car, he may be in bed (like Cavanagh, deNiord writes well of amorous awe) or in the woods.

Interstate has four sections. Nearly every poem in the first involves intimate encounters with animals, including an ornery colt, a pet dog that kills day-old chicks, a grouse and a doe, mating pigs, an enormous snake, and a bat in a woodstove. These poems are incidental in the sense of pivoting on incidents, but they work like parables as well, asking, What do we see, and what can we learn? This quality deepens and widens as the book proceeds. In the second section, the poems are like riddles, not ambiguous but mischievous and mysterious.

Over the past decade, deNiord conducted a vigorous and valuable series of interviews with elder American poets, which were gathered and published in a wonderful book called Sad Friends, Drowned Lovers, Stapled Songs: Conversations and Reflections on Twentieth Century American Poets. Most of his interviewees have now died, and several of them are eulogized powerfully and unsentimentally in Interstate. A particularly enabling presence here is the magnificent Ruth Stone, who is honored directly in one poem and implied in others, especially throughout the book's fourth part. In his poem "The Gift," deNiord channels another poet's own articulation of her task. The poem is presented in quotation marks, as though Stone were speaking in a voice overheard:

"All I did was write them down

wherever I was at the time, hanging

My name was attached to them

on the page but not in my head

because the bird I listened to outside

my window said I couldn't complain

about the blank in place of my name

if I wished to hold both ends of the wire

of complain. It was my plight, my thorn,

my gift — the one word in three I was

permitted to call it by the Muse who took

mercy on me as long as I didn't explain."

You hear the rhymes, lightly struck. Sometimes deNiord rhymes within the line, instead of at the more expected endings. Here is "Anchorite in Autumn," also an evocation of an old person, where the sideslipping rhymes counter what might otherwise settle into a nursery-rhyme gait:

She rose from the bed and coughed

for an hour. Entered her niche

that was also her shower. Shaved

her legs with Ockham's razor.

Rinsed her hair with holy

that was double-layered. Slipped

on her robe in the widening

gyre. Gazed in the mirror

with gorgeous terror. Took out

a cigarette and held it

like a thurible in the grip of a friar.

Stared out the window

These lines are slyly allusive, lofty yet casual and closely observed, roughened in texture by the staggered rhyming, which physicalizes the portrait.

Cavanagh's Straddle and deNiord's Interstate are agile, quietly intelligent and steadily pleasurable new books. Will they be noticed in the noisy frenzy that surrounds us? Yes, if readers read them.

I've trolled for years in U.S. waters for a reason

and some reach. Decades into it, still divided,

still unsure where I'm casting or what for.

I meet so many with a lost but knowing look,

who stayed put. Cut loose. Working out some

wonder. Angling in the dark. Playing out the line.

Our strength an open eye, our flaw a frequent

stutter and a crippling second guess, sure only

that those so sure of where they stand are sinking

on shore sands. And one thing more: no going back.

of compassion flutter. Home is an idea.

In love we are or lost in the lure. Hoping to hook

some kilter. The nation of neither-here-nor-there.

The maple outside the window was alive

with birdsong, but the birds were hidden

behind the leaves so that the tree itself appeared

to be singing a loud, cacophonous song.

They rose en masse like the shadow of a cloud

with the emptiness they left calling back

to them with the fullness of where they had been,

They sang ecstatically, as if it were morning,

although the sky was heavy with evening

and you could hear the silence in the sky

Cavanagh appears at the Burlington Book Festival on Saturday, September 26, 10:30 to 11 a.m., in Marsh Lounge, Billings Center, at the University of Vermont in Burlington.