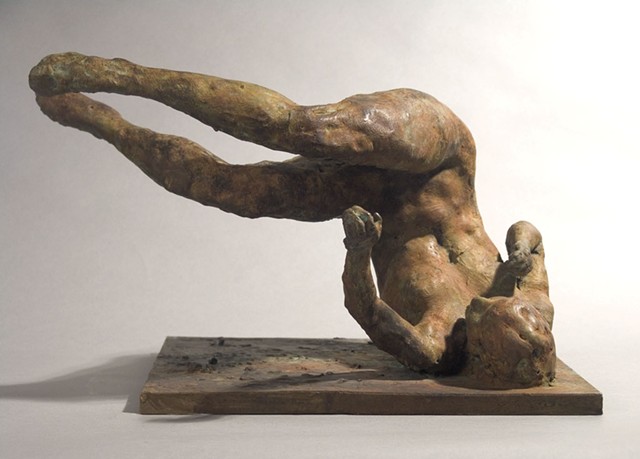 Visitors headed to the exhibit called "Ready. Fire! Aim." at the Hall Art Foundation in Reading should prepare themselves for a fascinating but unsettling experience. In only three rooms containing 39 works, the show progresses from conveying a sense of instability to embodying menace.

One might say it travels further, in that regard, than its sister show at the BCA Center in Burlington. "Ready. Fire! Aim." is a two-site exhibit. The curator of both, DJ Hellerman, was BCA curator when he devised this inaugural collaboration between Vermont's two major sites showing contemporary art. (He is now at the Everson Museum of Art in Syracuse, N.Y.)

Hellerman curated the Hall exhibit first, trolling the foundation's online database of more than 5,000 postwar works by internationally known artists for his selections. For the BCA show, which consists mostly of commissioned work, he asked six mid-career artists to respond to works in the Hall show. Each exhibit can be enjoyed on its own terms, but the connections are noteworthy. For example, Mildred Beltré's drawings at BCA resonate with a painting by Glenn Ligon ("Figure #3," 2009) at the Hall; both artists' text-based works address perceptions of race through language.

The show's title, a dismaying scramble of the expected directive for shooting a gun, sets the mood. Hellerman came across the phrase in a 2013 interview with Andrew Hall, who, with his wife, Christine, selects all the foundation's artworks. When asked to describe the couple's collecting philosophy, Hall answered with the cryptic phrase of the title. Whether he had read the 2008 business book of the same title by Michael Masterson is unclear.

What interested Hellerman were the social and, eventually, political implications of a thought process that puts impulse ("fire!") before strategy ("aim"). (Hellerman began curating the Hall show in November 2015; the 2016 election cycle played a bigger role in the BCA exhibit, he said during a phone call.) The Hall works he chose don't illustrate this process as much as they examine the dialectic between planning and action.

Daniel Gordon's photographs present this dialectic directly. The Halls have collected works by certain artists in depth, including those by Gordon. Of the show's 39 works, 25 are photographs from his "Flying Pictures" series (2001-2004). These are literally pictures of the photographer flying — that is, launching himself horizontally — in different landscapes and, in one case, out of a house's second-story window.

To appreciate Gordon's photos, viewers need to know that they are not Photoshopped. (The Hall provides no wall labels, but an exhibition booklet pairs brief descriptions with images.) The artist set up each shot and had an assistant click the shutter, deliberately eschewing digital manipulation. The result is an irresolvable tussle between the vision of impulsive soaring — one thinks of Daedalus and Bruegel's painting of the Greek figure — and the strategy of a well-planned shot.

Yet Gordon's self-portraits also raise a worrying question: What will happen when he hits the ground? His photos surround a single work in the center of the room that, in a certain frame of mind, one might take as foretelling the photographer's end. "Fuck'd" (2004) is Tony Matelli's deeply disturbing, life-size, realistic sculpture of a one-legged chimpanzee leaning on a crutch. Its body and head are impaled on all sides by weapons, including a sword, an arrow, a shovel and a machete. Even more alarming is the humor of the title: Are viewers meant to dismiss the carefully rendered violence as a facetious comment on the state of humanity?

Setting this ominous tone, preceding the room lined with "Flying Pictures" is a room filled with references to disintegration. Among these are three cubes of compacted black confetti by Lara Favaretto ("Absolutely No Donations," 2009) that are falling slowly apart; and a photorealistic ink-and-charcoal rendering of a mushroom cloud by Robert Longo ("Study for Dog Test (Bomb)," 2004). Joseph Beuys' "Silver Broom and Broom Without Bristles" (1972) rest against the wall, ready to be deployed for cleanup.

The third and final room of "Ready. Fire! Aim." leaves no ambiguity in its depictions of violence. On entering, a viewer is faced with a maquette of "Tumbling Woman" (2004), Eric Fischl's response to the 9/11 attacks. The sculpture depicts a falling nude at the moment her head hits the pavement beside the Twin Towers. It proved too disturbing to viewers when it was erected at Rockefeller Center in September 2002 and had to be removed. In the exhibit's context, the maquette acquires additional layers of meaning. That dialectic between plan and chance, impulse and strategy, applies equally to the woman's decision and the sociopolitical forces that put her in such a position.

Similarly raising questions of decision and chance, Olafur Eliasson's "The big implosion" (2003) is a 500-magnet DIY sculpture that can be reconfigured wherever it goes. The artist specified only that the result weigh the same as a human head. By chance, the work arrived in a shape resembling a machine gun, and Hellerman kept it that way. 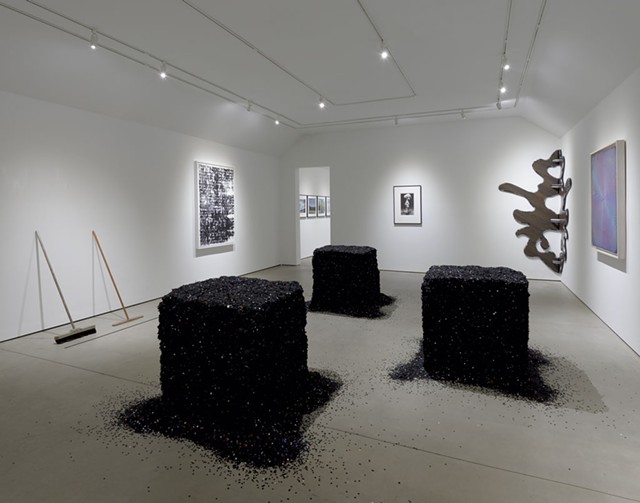 Two works depicting cyclical violence are positioned nearby. Keith Haring's "Boxers" (1987-88) are flat steel cutouts, one painted red, the other blue, that punch each other simultaneously through holes in their heads and guts. Bruce Nauman's wall-hung "Double Poke in the Eye II" (1985) uses colorful neon-tube lighting to outline two heads facing each other in profile. Each points a hand miming a gun in the other's eye. One figure's mouth is closed; the other appears to be shouting.

Somewhere between the first room and the last, language has been deserted. In the first room, Ligon's text-based painting, mentioned earlier, is filled with inscrutable letters rendered in coal dust. The words are there, if only we can make them out. In Nauman's work, the contrast is stark: Language is unheeded and useless.

If that makes viewers think of current political realities, and, in particular, the tweeted absurdities of a president who appears to favor impulse over strategy — firing, of a different kind, over aiming — the curator wouldn't be surprised.

"Ready. Fire! Aim" "wasn't a reaction to the political scene," Hellerman says. "But when the world changes, the artworks do, too. We didn't change anything, but [the election] changed the meaning."

The original print version of this article was headlined "Strategic Impulses"