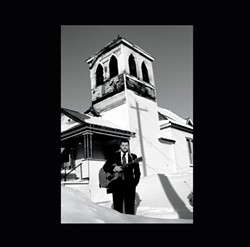 For a young guy, Ben Donovan sure is old-school. The Virginia transplant paid his musical dues in Burlington the hard way, busking for rent. If you spent any time on Church Street in the last couple of years, you've likely heard his silver-toned tenor giving voice to Buck Owens and Johnny Cash classics and, for good measure — and tips — the odd Paul Simon number. From there he started a country band, Reverend Ben Donovan & the Congregation, and grew his flock gradually, with under-the-radar gigs at juke joints around the Queen City.

Eventually Donovan caught the ear of local producer/musician/starmaker Jer Coons, who, in a recent email to Seven Days, says Donovan is the most impressive local singer he's heard since he stumbled on his other protégé, the ascendant Caroline Rose.

Donovan and his band holed up in the studio with Coons and, armed with the requisite amount of beer and smokes, laid down 20 tracks in two days. This was on top of a previous afternoon solo session in which Donovan tracked an additional 14 acoustic cuts. The result is an exceptional debut that, much like recent albums by Sturgill Simpson, Chris Stapleton and Jason Isbell, treats country-music tradition not as rigid gospel or a museum piece but as a living, breathing — and drinking — thing to be molded and reinterpreted.

Take, for example, album centerpiece "If There's DJs in Heaven." Though it boasts bright production that recalls 1970s outlaw country, the song is a pastiche of an even older tune, the Buck Owens staple "Sweethearts in Heaven." But there's a modern, snarky twist. "If there's DJs in heaven, I don't wanna go," sings Donovan with a drawling sneer. Then, "I'll take Satan's breath over goin' deaf cuz of some hipster with a MacBook Pro."

As a songwriter, Donovan is cut from a similar cloth — let's say denim — as gritty writers such as Steve Earle and Bobby Bare. But he's blessed with a versatile voice that can be both the sandpaper and the smooth, gleaming surface. He proves an adept crooner on cuts such as "Mumble" and "End of the Road Woman." But he's best with a little hitch in his voice — a lingering Marlboro rasp to rough up the edges.

The best example of this comes on "I've Been There My Friend," a touching but blunt song of consolation in dark times. "Cuz I know how it feels to be stranded," he sings with a weariness that belies his youth. "In Blue County, population: me / Where the road's torn you all to pieces / and there ain't no help as far as you can see."

Donovan is by no means in the same league as Simpson and Stapleton — or Earle and Bare, for that matter. But, like those singers, he's found a loophole in the ironclad bylaws of traditional country that allows for experimentation and evolution. At its heart, Donovan's debut is classic, old-school stuff, patterned after long-gone honky-tonk heroes. But it's also a distinctly modern album that's unafraid to stare Waylon in the eye and affirmatively answer the question, "Are you sure Hank done it this way?"