Revenge of the Nerds

Another group of geeks finds its "core" 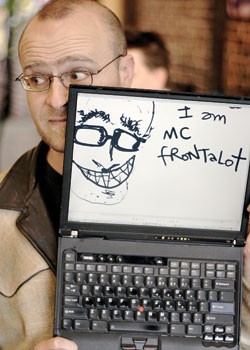 If you haven’t heard of “nerdcore,” you’re not alone. And chances are, you’re not a nerd. But the movement has seen a notable increase in popularity of late, largely thanks to the man widely considered to the hip-hop sub-genre’s progenitor, MC Frontalot. The pocket-protector-clad rapper is the subject of a new documentary film entitled Nerdcore Rising that has set the geekiest corners of the Internet abuzz.

SD: What prompted the documentary?

NF: I went to a [MC Frontalot] show. It wasn’t a terribly well populated show. But the fans who were there were unbelievably excited. They had traveled hours. These two fans, I remember in particular, traveled from Buffalo to NYC to see this show — and they were fans of MC Frontalot since his first free mp3s on his data website . . . When I went up to talk to them, they were in the midst of an argument about a particular card in Magic: The Gathering. I was like, “Oh, my God. This has got to be the only hip-hop club in the contiguous 48 states where this particular argument is happening.”

Meeting those types of folks made it clear to me that there was a movement. That it was something to film and that fans could really anchor this documentary.

Sure, the music is great and it’s fun. And the rapping is great and all that stuff. But that kind of doesn’t matter. A lot of bands have great music . . . It was really the quality of the fans that made the whole venture seem film-worthy.

SD: How big a phenomenon is nerdcore?

His first tour, there were moments when he was performing for, like, 10 people, in the beginning. But I would never be able to go to a town like Johnson City, Tennessee, and have 10 people give a fuck about me. So, in that sense, it really was obvious to me that it was a movement, even in that early stage.

I think the film has had something to do with his increasing fame and the word getting out about nerdcore. When we put out the trailer, [it] happened to have some celebrities [Weird Al Yankovic, Jello Biafra] . . . so it kind of, as they say, “went viral.” Now, MC Frontalot isn’t the only nerdcore artist touring. A lot of his little disciples are touring. There’s some peeps out there.

NF: (Laughs.) He really is! It’s funny. They really look up to him.

SD: Are there levels of nerdcore cred?

NF: You know, MC Frontalot would never engage in such considerations, I think. Because it’s the antithesis of the notion of “nerdiness,” and the guiding philosophy behind nerdcore is that it’s inclusive rather than exclusive.

SD: People are pretty passionate about what is and isn’t hip-hop, so how is nerdcore received in hip-hop circles?

NF: We interviewed J-Live and Prince Paul and they were really, like, kind about nerdcore. Not that they had heard of it before or were aficionados of it. But one of the things that Prince Paul noted in the movie is that hip-hop is about being honest to who you are. And these nerdcore guys are doing just that. If you’re excited about the fourth edition of the new Dungeons & Dragons and that’s what you’re going to rap about, then that’s being true. And that’s hip-hop.

SD: It seems like it would be pretty easy to dismiss nerdcore as a gimmick. Do you think the rappers’ honesty lends the genre some degree of legitimacy?

NF: It’s interesting. The film centers on MC Frontalot and he’s backed up by this three-piece band . . . but there’s a couple of bands out there, they plug in an iPod with a beat on a loop and they rap to it. And that’s kind of how it goes.

The movie will definitely show you that MC Frontalot is not a novelty act, because, musically, you can’t deny that his band is composed of musicians. There might be some other nerdcore acts out there that might be dismissed as such. Maybe it seems that they’re parodying rap music rather than actually engaging rap music.

The question is raised whether or not nerdcore is a misappropriation of black culture. And I think there are nerdcore rappers who are guilty of that. I don’t think MC Frontalot is one of them. And I think as long as [nerdcore rappers] continue to respect hip-hop rather than parody it, they’ll be just fine.

Nerdcore Rising premieres at Palace 9 in South Burlington, Sunday, May 4, 7 p.m. Admission is $8, which benefits the Vermont International Film Festival. The screening is sponsored by cable access stations VCAM and RETN. Says organizer Bill Simmon, "Nerdcore Rising is exemplary of the kind of DIY digital filmmaking that VCAM & RETN try to promote and teach to citizens and students in the greater Burlington area." Click here for more info.